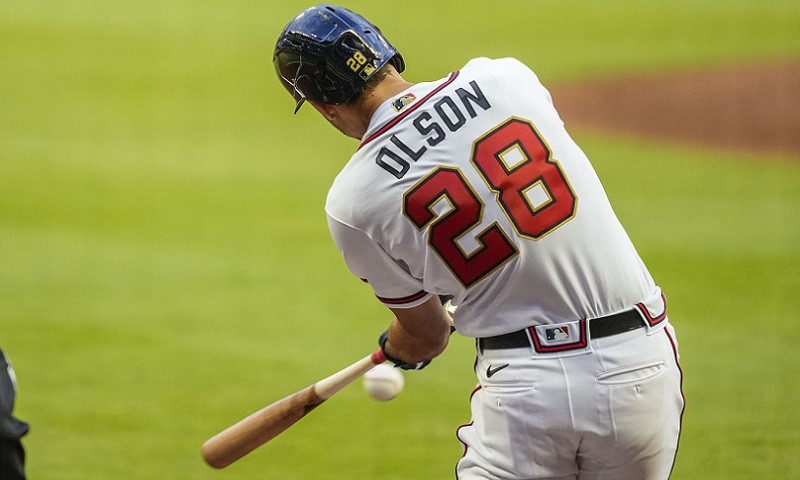 Take the mound with Sloan Piva as he delivers MLB picks and predictions for Tuesday, May 4, with lines from the top online sportsbooks. For more baseball betting picks, visit ScoresAndOdds!

Life is good. The weather in my native southeastern New England has been gorgeous lately, perfect for family trips to the playground and endless amounts of yard projects. The Newport, Rhode Island resort where I oversee the guest services staff has been picking up business. As COVID vaccinations increase, the negative effects of COVID on our day-to-day life decrease.

And, of course, this has been a fantastic stretch for sports fans. We just had a fun and eventful NFL Draft, not to mention the Kentucky Derby. The NBA regular season is nearing the finish line, and I find myself in the championship match of my dynasty fantasy hoops league. Saving the best for last, we are absolutely crushing it with our MLB Bets of the Day.

After sweeping my Friday night picks 3-0, my Bets of the Day record for the season now stands at a picturesque 20-8. My Moneyline of the Day hit Friday as well, which would have netted you $535 if you risked $100. That’s nearly $1,000 in winnings in just four bets. What’s not to love about those results?

Let’s ride this high, and take our momentum into a full slate of Tuesday baseball. The first pitch in the top-half of the Dodgers-Cubs doubleheader, a makeup of their Monday night rainout, will be at 2:20 EDT at Wrigley. The Giants kick off a doubleheader with the Rockies at Coors Field three hours later. Seventeen games total comprise the whopper of a Tuesday schedule. Life is good.

All MLB odds for this article are from BetMGM and PointsBet. All stats via MLB.com and Baseball Reference.

I’m fully aware that betting against the Astros offense can be dangerous, and picking Greinke opponents has never been fun. But the Bronx Bombers have (somewhat quietly) won three games in a row—outscoring the Tigers 18-4 in a three-game sweep over the weekend. They have now been victorious in eight of their last 11 games, and their rough start to the season seems to be a faded blip in the rear-view mirror.

The Yankees finally seem to have health on their side, and they are swinging scorching-hot bats. They are batting .284 in the past week, third-best in the MLB in that span. During that stretch, they have also mashed 11 homers (also third), and scored and driven in 33 runs (fifth and sixth, respectively).

Amazingly, New York’s offense isn’t even the most impressive part of their recent surge in the standings. The Pinstripes’ pitching has been absolutely incredible from top to bottom in the past six games, with an MLB-leading 1.32 ERA, 0.82 WHIP and .165 batting average against… as a staff! That includes three shutouts, a staff K/BB rate of 67-14, and just three homers (and eight total runs) allowed in 54.2 innings. That’s remarkable.

German has been smack-dab in the middle of this club’s recent success story, just like in 2019 when he led the majors with a .818 win-loss percentage (18-4 on the season). The 28-year-old sat out all of 2020 for a domestic violence-related suspension, and he’s clearly capitalizing on his second chance. German allowed just two earned runs at Cleveland on April 22, and then pitched seven innings of scoreless, three-hit baseball in Baltimore last week. He has issued just four walks total across his four starts this year.

Even if German falters Tuesday, the bullpen will be there to bail him out. New York ranks second in the MLB in bullpen ERA (2.39). But I fully expect another six or seven strong from the Dominican, who hasn’t exceeded 92 pitches in an outing all season.

Again, I’m not downplaying Houston’s offense whatsoever. The Astros have also won eight of their last 11 games, and they have scored 16 runs in their past three contests. I just don’t think they can outscore New York when they are putting Zack Greinke on the mound. In 15 career games against the Yanks, the veteran owns a heinous 5.05 ERA.

Making the Astros’ outlook even murkier this evening, Greinke has been roughed up quite a bit lately. Save for a gem in Seattle April 17 (8 IP, 4 H, 0 ER), the 37-year-old has not looked like himself. He gave up six runs on 10 hits (and three homers) against Detroit on April 12. He allowed another 10 hits against the Angels on April 23. And last time out, he suffered his shortest outing of the season, pitching just four frames and allowing four runs on four hits and two walks. The worst part: all three of those dud games were at home.

In Yankee Stadium, with everything clicking for the Yankees right now, I have to go with the home team. German is simply on a different level than Greinke right now, and nothing can seem to slow down New York’s offense. I like the Yanks -121 moneyline, but I don’t blame you if you pick them against the spread at +165 instead.

Revenge game! God, is there any sports term more cringeworthy than that one? Well, get ready to hear plenty of it before, during, and after this contest. Gibson, who started 94 games at Target Field in his seven seasons as a Twin, will take the mound as Minnesota’s enemy for the first time Tuesday.

If you held a gun to my head, my money would be on Gibson, who has been incredible in five out of six games this season. After an Opening Day fiasco in which he allowed seven baserunners and five runs—and made just one out before getting the hook—the veteran has gone at least six innings in each of his five games since. Even better, he has allowed one run or fewer in each of those contests. By limiting hard contact, and throwing strikes without trying to overpower hitters, Gibson has taken his ghastly 135.00 Opening Day ERA down to a sparkling 2.16.

That’s still higher than Happ’s 2021 ERA, which is an unbelievable 1.96. The 38-year-old journeyman has turned back the hands of time (the Curious Case of J.A. Button?), and he owns a staggering 0.826 WHIP. Similar to Gibson, Happ won’t blow away many batters. But he also won’t allow much damage.

For all these reasons, I’m all-in on my first OVER/UNDER bet of the 2021 season, smashing the UNDER in what should be an aged pitchers’ duel for the ages. Whip out your aged wine and aged stinky cheese, because this one’s gonna be a doozy!

I had to pick this game, as we like to include west-coast games and the Athletics are the hottest organization in baseball. Oakland’s offense has been a sight to behold, with first baseman Matt Olson looking like an MVP candidate again and centerfielder Ramon Laureano combining power with speed. Olson has seven homers and a slash rate of .303/.370/.607. Laureano has mashed dingers in three consecutive games, and he has an MLB-leading eight steals on the season.

Hell, even veteran second baseman Jed Lowrie has been scorching at the plate. Everything is working for this A’s squad right now, which seems like such a textbook Oakland Athletics story. Could this be the year they finally win Billy Beane that elusive World Series title?

Maybe. If Oakland’s pitching continues to deliver, I wouldn’t bet against the A’s chances. I’m telling you—it’s all working. Just look at Cole Irvin: a 27-year-old who started just three games for Philly in his first two seasons, and gave up 34 earned runs in 45.1 innings there. He now owns a 3.67 ERA/3.48 FIP in five starts since moving to Oakland, where dreams apparently come true.

The Athletics’ dream run won’t stop Tuesday night. Anthony Kay may throw blistering four-seam fastballs, but he also tends to run into command issues early and often. He will be making just his fourth career start, and second start of the season. He lasted just 3.1 innings in his April 15 debut at Kansas City, giving up five runs (four earned) on six hits. He threw 56 pitches, generating seven swinging strikes and just five looking.

Irvin doesn’t yet have the clout to warrant being heavily favored by oddsmakers, and that’s to all of our benefits. I’ll take him over Kay any day, especially with the smoldering Athletics offense backing him up.

Moneyline Parlay of the Day

New York Yankees (-121) vs. Houston Astros (Domingo German vs. Zack Greinke) – We sang this same tune last Friday, but with Gerrit Cole on the mound. Jump on the red-hot Yankees at home, with German on the mound against a struggling Greinke, who seems to hate pinstripes.

Oakland Athletics (-115) vs. Toronto Blue Jays (Cole Irvin vs. Anthony Kay) – The A’s are the hottest team in baseball, and Anthony Kay is about to find out why. Irvin’s fantasy ownership went up two ticks to 13 percent last week—it might shoot up another 30 percent if he keeps the train rolling against the young-slugging Blue Jays.

Atlanta Braves (-140) at Washington Nationals (Huascar Ynoa vs. Joe Ross) – I don’t love this pick, but I like it better than the remaining options. The Braves are slashing .295/.350/.488 as a team in the last week, and I like Ynoa over the always-untrustworthy Ross.

Spread Parlay of the Day

New York Yankees +1.5 (-185) vs. Houston Astros (Domingo German vs. Zack Greinke) – As of this writing, at 3:30 a.m. eastern, New York is getting a run—at home—on BetMGM. Sign me up. Greinke stinks against the Yanks historically, and the Bronx Bombers are very much alive and well.

Texas Rangers +1.5 (-140) at Minnesota Twins (Kyle Gibson vs. J.A. Happ) – Oddsmakers made the pitcher with the better numbers this year the favorite. I’m picking the underdog who I know is a better overall pitcher, and who played seven seasons at Target Field.

New York Mets -1.5 (-115) at St. Louis Cardinals (Jacob deGrom vs. Johan Oviedo) – When you have a chance to pick the best pitcher in the world, you pick him… especially when he’s going against Minor League call-up Johan Oviedo (side note: I would have picked the Mets on the moneyline, but PointsBet currently has no odds posted for this game). deGrom, who owns an 0.51 ERA, is pitching on an extra day of rest. Two and a half weeks ago in the same scenario, he struck out 15 Nationals and pitched a two-hit shutout. This guy might be the Tom Seaver of the 21st century.