In Fantasy College Football Part One we discussed some of the studs this year in college football, now in part two we are going to hit up on some potential sleepers that can help you bring home some money this year in College Football. Remember once again, If you’re looking to give College Fantasy Football a try this season, I would recommend getting started with RotoGrinders exclusive sign up bonuses by checking out the DraftStreet Review and Daily Joust Review. These two sites are going to be places to play daily fantasy college football and the season is only a few short weeks away. 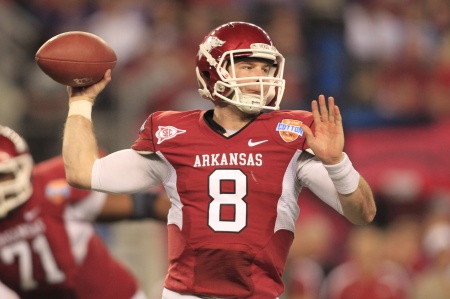 One thing Bobby Petrino knows is offense and this year the Hogs are loaded with talent on that side of the ball. Ryan Mallett had a nice career at Arkansas, but it’s Tyler Wilson’s turn and from what I saw last year from this kid, they are in great hands. I specifically remember Wilson coming in and lighting up the Auburn defense after Mallett went down. For a kid to have that kind of poise in that situation, lends me to believe he has what it takes to succeed in the tough SEC. Last seasons leading rusher Knile Davis is out for the year, so I’m guessing Petrino may even air it out more than normal this year. Wilson has tons of experience at the wide receiver spot, so with that the tools and the system he is in, I would expect great things from him this year.

The “U” has certainly fallen off over the years, but I like new coach Al Golden and think this team will surprise quite a few people in 2011. The main reason Miami has lost games the last few years is because of turnovers. The Canes finished -8 in turnover ratio last year and Golden has to realize that the less they rely on Jacory Harris the better. Which is exactly why I think Miller will be putting up some monster rushing numbers this year. As the #2 RB last year, he averaged 6.0 yards per carry and lit up Virginia Tech for 163 yards. He returns to a team that is loaded on the offensive line. Sophomore tackle Seantrell Henderson (6’8 345) reminds me of Orlando Pace and should be opening up holes all over the place for Miller.

After what seems like 10 years of eligibility Tyrod Taylor finally has left VT and Thomas is the new kid on the block. Unlike Taylor who looked more like a scat back playing quarterback, Thomas is a physically imposing beast of a man. At 6’6 245, he has a game very similar to that of last years Heisman Trophy winner Cam Newton. I don’t suspect him to put up Heisman type numbers, but I do expect quite a few explosive games for the sophomore. The Hokies bring back all their top receivers from last year, so he should get some quality production from that unit. The schedule sets up great for VT this year and many are calling for an undefeated season. It’s not impossible, but for it to happen Thomas is going to have to put together a monster year for the Hokies.

Wide Receiver is the one position that you rarely see young players make an immediate impact, but Woods bucked that trend last year by leading the Trojans in receptions and yards as a true frosh. At 6’1 185 he is not the most physically impressive receiver in college football, but clearly he and quarterback Matt Barkley are on the same page. USC lost a ton from their WR corps, so I think they are going to be relying on Woods much more in 2011. Everybody knows the Pac 10/12 doesn’t play any defense, so it’s always a good idea to take a player or two from a team on the left coast. Woods looks like he will be an excellent player to target most weeks.

If you decide to give College Football a go this season, as I’m sure many of you will, best of luck!

Dan “DB730” Back’s fantasy sports experience dates back the pre-internet era when compiling stats required daily theft of the USA Today sports section from the school library. Since that time, he was lucky enough to achieve his dream of hosting a daily sports talk radio show. After 5 years of the radio grind, he has since hung up the headphones now plays stay at home dad. His days currently consist of worrying both about getting his son to crap in a duck potty and gripping over whether to start Ryan Doumit or JP Arencibia in Daily Fantasy.