Good afternoon! I was encouraged by my daughter to share a personal story and since it’s my blog and my daughter is pretty smart I’m including a personal stoy at the beginning. After that we will examine the commitments from the last episode (I’ll explain why shortly) and then follow the standard format.

I often say I’ve lived a professional Forrest Gump kind of life. Not just because I was born and raised in a very small, rural town (eastern KY) but during my professional career I was a shockingly significant party to some notable pop culture happenings. Many of these shaped the approach I take in life and, of course, DFS.

I spent 13 years working for Blockbuster Video from 1994 – 2006, so I saw the rise and fall of a pop culture phenomenon that has been the subject of business school case studies, dinner conversations and even documentaries. I have many stories but I’ll just share one today. During my time at Blockbuster I worked my way up from an entry level employee of a franchise store all the way to Regional Director running 200 stores in the Midwest. I moved my family 7 times in one 6 year period (and yes, my kids still talk to me). I worked in the stores and in the corporate office holding over 10 different titles in my 13 years. I know from my time in the DFS community many people still have fond memories as a parent taking their kids or as an adult now who was the kid back then.

I was working as a project manager in the corporate office in Dallas and primarily on projects that directly impacted the stores since I had experience in the field. The group I worked with sought to support field employees via standardized process, system changes and the introduction of tools. We had 10 stores in the Dallas area, known as the “learning stores”, we used to gather ideas and test possible enhancements . One such items that many of you will remember is “the cart”. I’m sure, if you have memories of Blockbuster, you also have memories of standing by the return counter and looking through stacks of movies waiting to be returned searching for that one new release you wanted that night.

In the early 2000s Blockbuster struck a deal with studios that significantly increased the number of copies each store received of new release movies. As such, the task of returning those movies grew exponentially. When stores were busy the first thing that fell to the bottom of the priority list was returning movies to the shelves. I knew from my own experience there are only so many movies you can carry at one time when returning them. However, the time that was being wasted by being asked to go check for a movies and the potential revenue being lost on product in the store but not available was incredible. Lightening struck me one day in a library as I saw this cart loaded with books being pushed up and down the aisles. I immediately went to the nearest office supply store and purchased a few of their standard plastic carts and dropped them at the closest store. After 6 months, at least 4 different versions of the cart, more meetings than I can remember and one shocking challenge I will never forget (I’ll share that in my next episode), I shipped 12,000 customized, fabricated carts to 6,000 stores nationwide that I designed. If you have ever stood and picked through a cart filled with movies at a Blockbuster, you were looking at one of the Forrest Gump moments from my life.

So the real question is how many shrimp did I catch last week in MLB DFS?

First lets review the commitments and actions from the last episode

I absolutely made significant changes to what I was doing – Fail

I certainly added 20 max which as I reflect on my first commitment was clearly in violation of it and to make it even worse, I did 150 max on 2 slates – Double Fail

For all my talk about my edge coming from being disciplined to approach and process improvement, I let the small bit of success from the prior week get into my head and by midway of the week I was chasing success into areas I had already identified at failure points. I can’t change the past but I need to hold myself accountable so there it is.

In spite of my egregious disregard of the key learnings and commitments, I managed to have a small profit on the week of $94.82. 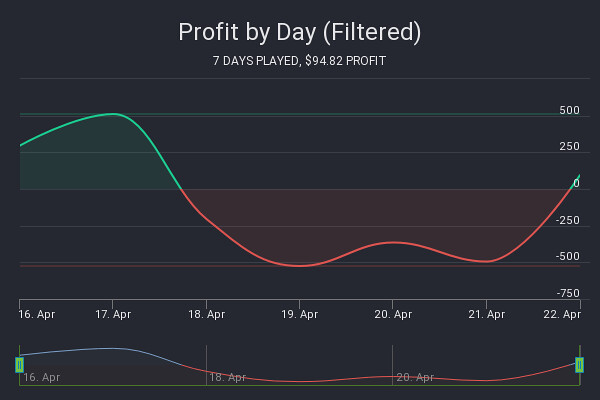 If we look at the 2 week trend you can see more clearly the nice success trend, followed by failure, made exponentially worse by my decisions, and then a strong close. Yesterday, I abandoned the 20 and 150 max contests. I don’t mean to say that contest entry alone is the only source of failure. Obviously, there will be days when I’m just not producing winning lineups. The contest entry mistakes limited my profitability on winning days and amplified the losses on losing days. 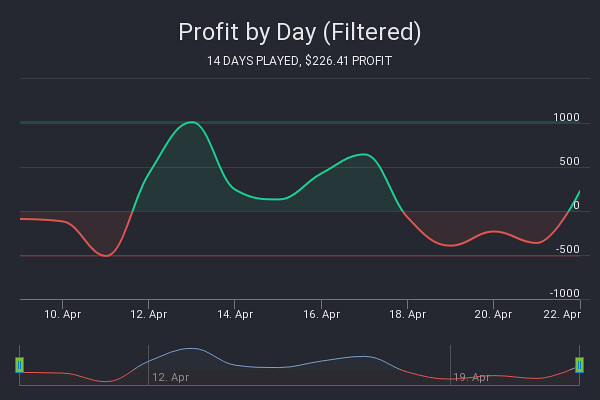 I know a case can be made for the upside of entering these contests and I am aware that losing in a single week does not always mean I shouldn’t play them. Over the course of a season of playing them consistently, the rate of losing will be high but, if done correctly, the small percentage of winning lineups can be incredibly profitable. My issue is that right now, I am still trying to establish the core set of contests that I can be sustainably profitable with over a longer period of time. I spoke of the impact on my results by splitting focus last week so I am not confident I am constructing lineups that can win in those contests. I won’t repeat the rest of the “focus monologue” but that is the larger issue and why I will follow through on my commitments this week.

No big surprises in the tracking data. I had it handy so I included the extra slate on the 17th. I will call some attention to yesterday where I did not play any 20/150 max contests and redistributed those entry fees to more DUs, multipliers and a couple SE contests. The impact is as noticeably favorable there as the negative impact is on the 18th.

Based on some conversations in the discord with our resident process expert, BlenderHD, I did add multipliers to my contest entry mix yesterday.

This episode has grown rather long so let’s skip right to what my plan and commitments are for this week.

I am feeling very good with my daily research process and routine and have successfully identified many individual successful plays this week. I have managed to avoid most of them in my main lineup 😊. Incorporating the hand-built SE contests gives me an outlet to leverage some of those plays that may not be optimal for a cash lineup but could be profitable in a tournament lineup. Next week I’m looking forward to including a lineup that was successful and some of the research that led me to the plays included in it, n addition to confirming how the overall strategy led to increased profitability and one step closer to my goal…..for now the Grind goes on!