I can’t speak for you, but it’s amazing the profound affect Daily Fantasy has had on my weekly sports viewing. I’ve been a sports nut my whole life so watching baseball on a nightly basis was going to happen with or without the daily fantasy sports game. The same can’t be said for Thursday golf. I can’t remember the last golf tournament, (especially non-major) that I took time out of my day to check scores on my smartphone and tune in to the Golf Channel to follow the action. But sure enough, there I was, worrying about whether or not Ryugi Imada was going to make the cut for at the Wyndham Open. It’s amazing how much more interesting these things become when you have a little (or a lot) riding on the outcome.

Unfortunately, my boy Ryugi didn’t come through this past week. It’s really painful because I hit on Webb Simpson who took home 1st place, but the more I’ve been playing the weekly golf on Draftstreet, the more I’m getting a handle on the type of team I need to put together.

Clearly, golf is already drawing plenty of interest. I noticed that Draftstreet has jumped the weekly Guaranteed Prize Pool tournament from 50 entrants to 100. My guess is they will have no trouble filling it, and someone is going to be taking home a nice chunk of change.

If you aren’t that confident in your abilities to put money on your golf picking skills, don’t miss out on the exclusive Rotogrinders $150 free roll going on his weekend as well. You can find the details in the Rotogrinders forum. If you’re not a member of DraftStreet yet, make sure to join Grinders Incentives for the following ridiculous bonuses when you join:

This week the Tour starts their “Playoffs” and even though the concept of a golf playoff is ridiculous, they are playing for big money as the winner of the Fed Ex Cup will take home $10 million. Here are some guys that I think look like solid plays this week: 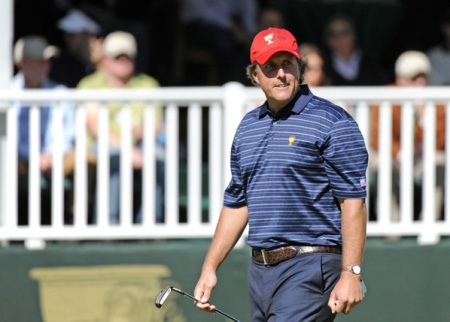 Lefty surprisingly hasn’t had a win this season, but this might be the week he breaks through. Statistically he is not having one of his finer seasons, but he comes to play when it matters. Even though this isn’t a major, there is a lot on the line and he always seems to play well in the NY/NJ area. He is kind of risky for the price, but he’s a lock in my eyes to make the cut and has a great chance of getting a win.

He definitely disappointed some people by not making the cut in the PGA Championship, but if you look at the scorecard he really didn’t play that bad. He carded 9 birdies in those two rounds which in most cases is not only going to allow you to make the cut, but probably be in contention. Unfortunately for Day, when he found trouble, he found it real bad. To the the tune of 4 double bogeys. He has be uber consistent all year long and his 8 top 10’s this year are second highest on tour. I think he rebounds this week.

You need to find some low priced guys who can make the cut for you if you want to win in fantasy golf. Adams is my pick to be that guy who probably won’t win it for you, but won’t lose it for you posting a big number the first two days. He has made the cut in four out of his last five and actually even has two top 10’s during that time. Good play for the price.

He’s not a big name, but he is a consistent performer. The Swede missed the cut in the PGA Championship but had 4 consecutive top 20’s before then. He is ranked 10th in scoring average on the tour and has made the cut in 17 or 21 tournaments in 2011.

Good luck on the links this weekend.