Hello Grinders. We have another Call of Duty slate upon us, and given this is only our third weekend of it, trying to figure out lineup construction options is still fairly new. I decided to search through the previous four main slates to see how Vegas has done with its odds in predicting the favorites, as well as go back to look at how lineups were constructed on DraftKings for the winning lineups. Note for my research below, I’m only focusing on DraftKings as that’s where the majority of my DFS action occurs, and I’m only looking at the 20-max contest as that’s where I previously played and the prior contests are easier for me to find. If you’re playing the large 150-max contest, expect way more variation in the lineup construction as there are just more combinations that can be submitted.

Let me preface this by saying something important – I realize this work isn’t necessarily predictive. In other words just because a winning GPP lineup used a 3/2/1 stack, for example, doesn’t mean that a 3/2/1 stack is going to be optimal tomorrow. Each slate is different in terms of matchups and pricing. But my goal of this exercise was to at least take the data I had available and try to see if there were any common trends among the winning lineups.

If you aren’t familiar with COD DFS, I’ll point you to this primer, which does a good job breaking down the game and scoring. The biggest point I need to make is that it’s a Best-of-5 series, but DraftKings doesn’t provide any bonus scoring if there’s a 3-0 sweep for the two games that don’t get in played. In other words you are almost penalized sometimes for playing players from a 3-0 sweep as they can be outscored from players in other series that go four or five games. It’s a common complaint from DFS players that it’s unfair, but that’s simply the nature of the game right now and we have to play within the boundary of these rules. I’ve taken the approach of game stacking all four games on previous slates with the hope they go the full five, but I wasn’t sure if that was optimal (and hence, why I started doing this research). While it may be unfair on the surface, you should always try to exploit the inefficiencies in DFS if it exists. Let’s dive in.

The winning lineup used a 3-man DAL (Shotzzy/Clayster/Huke), 2-man OGLA (Dashy/Kuavo), 1-man Team Faze construction. In other words, a game stack of the OGLA-DAL game and the Team that was the heaviest favorite on the slate in Faze. Noteworthy was that his Captain was from the side he was heavier on, DAL, which also won the series 3-1: 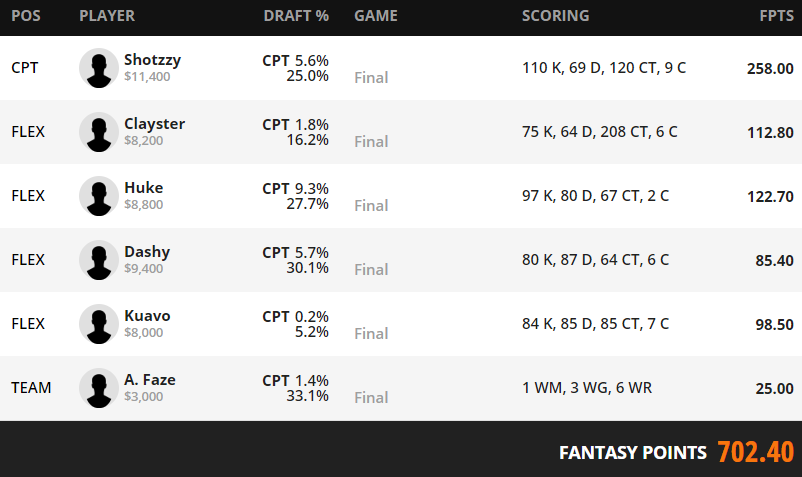 But take a look at the 2nd place team, which was only .3 DKFPs behind: 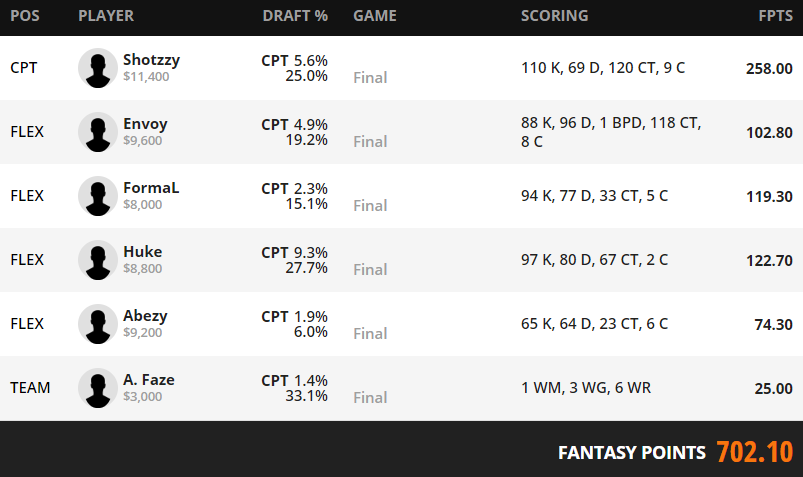 This 2nd place lineup used a 2-man DAL (Shotzzy/Huke), 2-man CHI (Envoy, FormaL), 2-man ATL (Abezy, Team Faze) construction. In other words, not a game stack and it even included a mini-stack of CHI, which lost its series to NYS. But CHI were favored and that series went the full five games against NYS. Granted, this was the first ever COD slate we had on DraftKings so we were all learning, but this construction was really interesting in that even pieces of a losing team in a series that went five games was part of a 2nd place lineup. 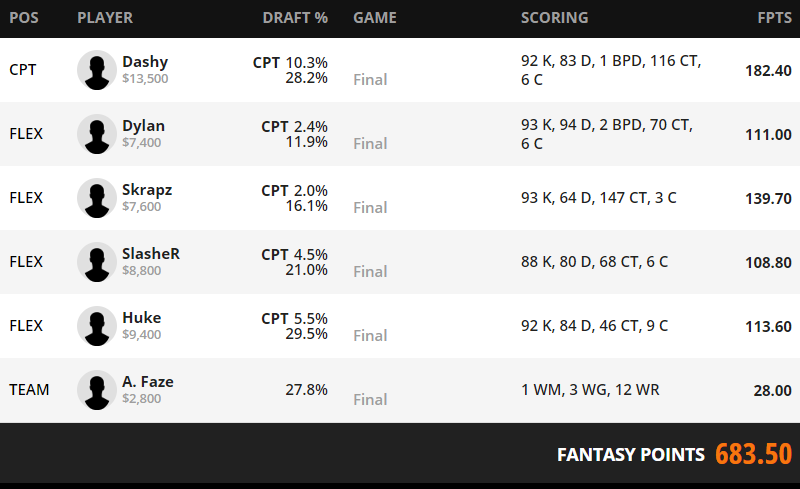 This was the winning lineup on April 25, but surprisingly it was duped four times. This one was a bit of a head scratcher as it didn’t have a game stack and instead used a 2-man OGLA (Dashy/Slasher), 2-man LON (Dylan/Skrapz), 1-man DAL (Huke) and 1-man ATL (Team Faze) lineup. It was interesting to me because LON lost its series to CHI, yet it was still optimal to use Dylan and Skrapz anyway as they both had solid games and they were cheap in the $7K range. There were no sweeps on this day so I also think that’s why it was fine to use two losing players from LON as that series went four games. 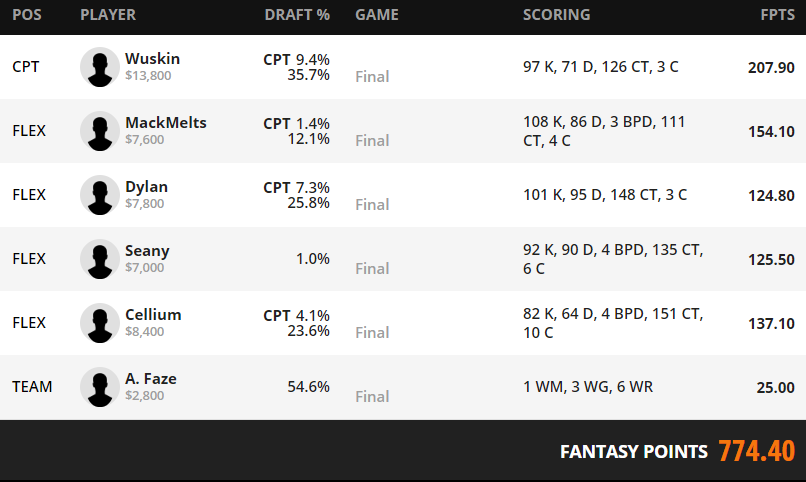 The winning lineup here used a 3-man LON (Wuskin/Dylan/Seany), 2-man ATL (Cellium, Team Faze), 1-man NYS (MackMelts) construction. This was pretty contrarian in that LON was an underdog but ended up winning the series 3-2 against OGLA, but it worked out considering this was on the only game that went the full five games. Cellium and Team Faze made some sense as ATL was a heavy favorite, so it seems like just eating the chalk of a heavy favorite at the Team spot continues to be a solid strategy. The inclusion of a one-off MackMelts seems odd at first glance but keep in mind NYS was a heavy favorite but ended up losing to TOR 3-1. MackMelts came in at relatively low ownership at 12% despite having some buzz about him, and he showed he could put up a GPP-winning score even in a series loss. 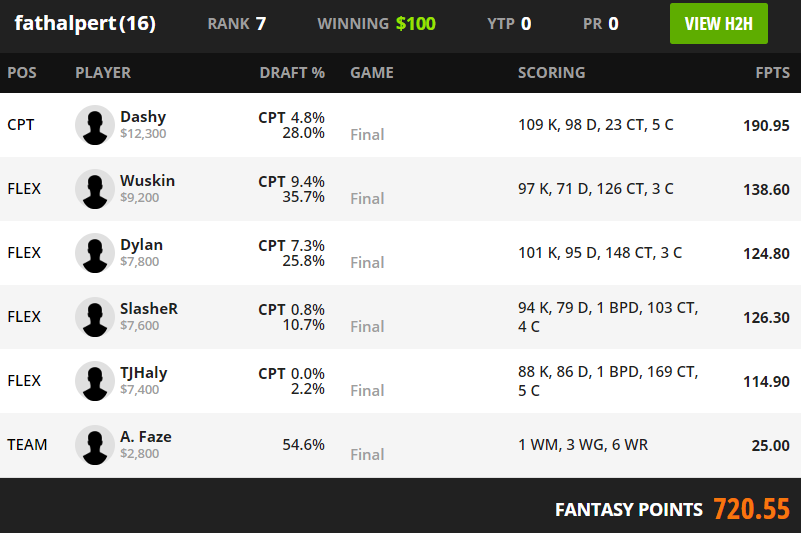 I did want to highlight another lineup, and it was mine that came in 7th. It was a straight game stack of the OGLA vs LON game, but the wrinkle was that I went heavier on the underdog by using a 3-man OGLA (Dashy/Shasher/TJHaly), 2-man LON (Wuskin/Dylan) 1-man ATL (Team Faze) construction. I was also different in that I used a 2.2% owned TJHaly instead someone like Kuavo who was $200 cheaper and much chalkier. This was a case of a game stack working out since it went five games and I was able to capitalize on a low-owned TJHaly going off, but I was still 50+ DKFPs off from that 1st place team which made me question the upside of a game stack even if it goes five games. 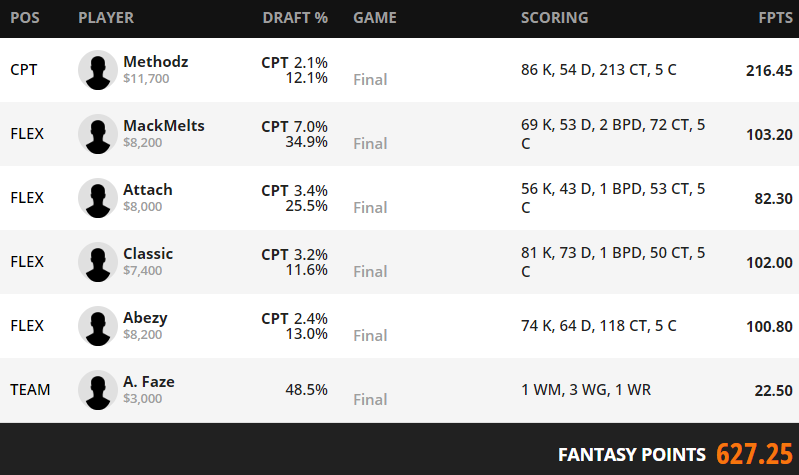 Finally, the winner of the May 9 slate used a 2-man TOR (Methodz/Classic), 2-man NYS (MackMelts/Attach), 2-man ATL (Abezy, Team Faze) approach. All three teams he stacked were winning teams, and noteworthy is that TOR and ATL both went four games so this had the advantage of the extra game.

I’m not going to show it, but the 2nd place team was only .5 DKFPs behind this and did a 2v2 swap that removed Attach/Abezy and instead plugged in the duo from ATL, Simp/Cellium. In other words it got heavy exposure to the two series that went four games instead of being three-game sweeps, allowing that lineup to rise to the top.

1. Of the 15 games where there was a favorite, the favorite has only won 9 of those games. In other words, you’d have a record of 9-6 if you only bet the favorite meaning we’ve seen a decent amount of “upsets” so far. There is plenty of merit to targeting underdog teams in this Best-of-Five format to be a bit contrarian.

2. Of the 16 games, 11 have gone four or more games and only 3 have gone the full five games. And based on what we’ve seen so far, getting exposure to those teams that play four or five games is extremely beneficial (which is common sense). In some cases we’re seeing winning GPP lineups even have players from the losing team of a series that went four or five games, so it doesn’t appear you’ll always need to pick players from the winning team only. I’m going to continue trying to prioritize mini stacks from teams I think will be winning, but I can see merit to using mini stacks from even the losing teams as their prices should be lower and there is still upside for losing teams if they don’t get swept.

3. It also seems like just eating the chalk of a heavy favorite as your Team is a solid strategy as the Team pricing is so soft anyway and the ceiling of a Team isn’t really worth chasing. Per the Primer I linked, a Team’s ceiling is only 28 points so you’re really just better off trying to play a team who is a favorite and hoping they come through with a win.

4. Stacking appears the way to go, as you’d expect, and I think your Captain needs to be part of your stack and not a one-off.

5. We saw a game stack take down the first slate, but then we saw more mini-stacking of cherry-picking pieces from different games take down the later slates. My initial thoughts are that game stacking is still a valid strategy but it may not have as high of a ceiling as taking pieces from multiple games. This is still something I’m going to need to explore and I’m likely going to continue doing a combination of both in my 20-max contests.

6. With only a few slates under our belt, it’s clear to me that we still have a ways to go in figuring out what may or may not be an optimal lineup construction, as it appears there’s a ton of variance in whether a series goes more than three games and even more variance in which of these players have big games. There doesn’t seem to be a one-size-fits-all approach yet and in some ways, that’s going to continue making COD DFS fun.

Let me know if you have any thoughts below in the Comments section. Thanks for reading, and may variance be on your side.