I didn’t get to make a blog last week because I was busy at the US Open qualifier, but it turned out to be a good thing I didn’t write one. Stephen Ames was very impressive in his warmups and on the course at the US Open qualifier. He also finished well last year at the FedEx St. Jude’s Classic so I took a shot with him, even though he hasn’t performed well this season, and he missed the cut on the number. Villegas also missed it on the number while David Toms had no chance. Needless to say, my picks would’ve been poor. 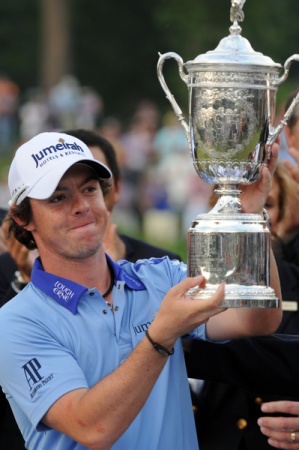 The 2012 US Open at Olympic Club, located in San Francisco, will be hosting it’s 5th US Open. Past winners include Jack Fleck, Billy Casper, Scott Simpson and most recently Lee Janzen in 1998. It will look fairly different from then with trees being taken out and holes lengthened among other things. The course will play to 7,170 yards with a par 70.

For a US Open, the course isn’t very long, but will have firm, fast greens along with tree-lined fairways with dog legs and reverse slopes or camber(for example, a dogleg right with a reverse slope would have the ground sloping right to left). Given what Rory McIlroy did last year, I doubt the USGA allows any chance for guys to shoot real low. The first six holes are being dubbed as one of the toughest opening stretch of holes in US Open history.

The first hole was played as a par 5 in the ’98 Open, but has been converted to a 520 yd par 4. The third hole is a 247 yd par 3 with a pretty small green. It is guarded by two bunkers and will also be a very tough par. Any golfers with nerves that are not fully committed to their golf shots will find tons of bogeys on the opening holes. But this is the great thing about the US Open, it separates golfers who are hitting it pretty good and those hitting it great.

On number 7, the players finally get a break. It should be one of the most exciting holes in the tournament. It’s a par 4 288 yds, but the USGA already said it will play as short at 267 yds. It is a classic example of risk/reward because I am sure some of the pins will be tucked on slopes or around the bunkers and almost everyone in the field has a realistic chance of driving the green. You could see eagles or bogeys here. I only wish this hole was later in the round to create more excitement around it.

Number 16 will be playing as the longest hole in the history of the US Open. It is a 670 yard par 5. Unless the USGA moves the tee forward, it will be a routine 3 shot hole. The only problem is if golfers miss the fairway off the tee, it will create a long 3rd shot to the firm green. Bogeys are much more realistic on the par 5 than most due to the length. Once players get through the 16th, they can breathe a bit easier as the 17th is a 522 yd par 5 followed by a 344 yd par 4. It much more likely for golfers to make a birdie to win the Open as opposed to bogeying and losing in the final 2 holes.

Do not forget to check the weather. The weather is important in every tournament, but is a great factor in majors (especially US Open and British Open). Right now, it looks to be a bit colder on Friday with a high of 67 as opposed to the mid to high 70s. The 67 isn’t a big deal, but that is the high. As the weather forecast becomes more accurate, I’d check to make sure your guys aren’t teeing off at 7am when its 45 degrees outside with a wind chill even lower. Also, and probably more important is the wind. If you go to weather.com and type in San Francisco you might see the difference in temperatures first. But if you look closer, you will notice the wind is N or NNE at 14-15mph Monday-Wednesday for the practice rounds. When the tournament starts, it will be playing SSE 9-15mph. The change in wind direction will create a whole different golf course if the forecast stays this way. Guys with more experience and a history at the course will have a great advantage over those that had to Monday qualifier and are just seeing the course for the first time.

Good luck and stay tuned for some player notes in the future!