Well it’s that sad time of the year right now where we have to say goodbye to the college football regular season. Sure we are going to have plenty of action during December and early January for the bowls, but it’s just not the same as the Friday night hustle to put in those lineups and then sit around on Saturday watching those games from start to finish.

Very sad day here in the Chopper Household and probably even sadder in the DB730 home, since that dude was on a serious heater to end the year. So much holiday joy during the month of December, but also a supreme amount of sorrow, I give to you my final regular season DailyJoust college football lineup(spruced up with some christmas colors).

I knew there was something special about this guy last year when I saw him fill in for RGIII in the 2nd half of a big game. He stepped in and looked great. From that point I had him targeted as one of my go to guys in 2012. No one, let me repeat that, NO ONE has stopped this Baylor freight train all year long. Florence averages around 38 FPPG this year and has been scary consistent. With a small player pool this week I am paying the salary and taking the single best fantasy player this week as my QB.

Speaking of heaters, this guy has 7 TD’s in his last 4 games. He has become a real fantasy stud at RB. His price is still fairly modest and too good to pass on. He has become the sole force of the Cincinnati offense.

Burkhead is a name most college fans have forgotten about. He had such high expectations coming into his senior year. Unfortunately for Burkhead and all college fans this was a total waste of a year for him. However there is time to salvage it. He has a super low price this week and in watching the game last week I would say he is back to being the #1 guy. They gave him the lion share of the work in the 2nd half last week and he looked good. For this price and this talent he is a must play in a championship game.

Another guy whose salary has hit the skids. Although with Street the problem has been that he has been supplanted in the pecking order of WR’s. Shanahan seems to be the #1 guy now and Street is 2nd. This is still a solid price though for a talented guy. You got to make some of these decisions to get that stud QB on the roster, so I am rolling Street out there this week. 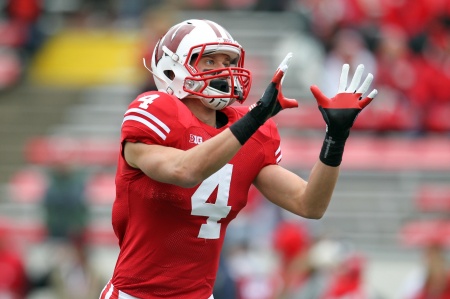 In that same championship game is Jared Abbrederis. His cold streak has driven his price down to bargain basement. Now is the week to capitalize. Nebraska will be sticking 8 or 9 guys in the box to stop Montee Ball and it should leave Jarred Abbrederis with his first big game in a while. Too much value to pass up at this price.

Georgia’s defense is overrated IMO. I do believe they can be beat. Cooper is as good of a WR as I have seen in the SEC this year. I think he can create some fireworks in this game and send the Crimson Tide to the national title game.

In the Joust format I am not looking for a PPR guy. And since most TE’s don’t rack up yardage then that really leaves 1 aspect of scoring- the Touchdown. O’Leary has scored a TD in 2 straight games and has a low price this week. The options at TE are particularly thin this week so I will not be spending a dime more than a need to. Even if Nick gets shutout, I’ll roll out this guy for cheap and watch as others spend decent money on TE’s that yield the same bad results. This is not the week to spend on TE’s.

Not much to say here except this is a solid K in a good matchup.

The Sooners still have the same vaunted defense that people were scared to play a month ago. Nothing has changed except the vicious schedule of facing offensive juggernauts like Oklahoma State, West Virginia and Baylor the last 3 weeks. That will drive your defensive price down for sure. This is a much more manageable game for Oklahoma’s defense.

And that will do it for the 2012 College Football Regular season for me. It’s been a great year filled with excitement. It was incredible to watch as all the sites rolled out their new college football products. Next year things will be even bigger and better. It’s been real and it’s been fun. So as I turn off the light switch on another year of the college football party and I close the door behind me, I say to you “You ain’t got to go home, but you got to get the hell out of here. Go play some NBA or something.”