OK guys, the countdown is on. Only 2 more full weeks of this wonderful CFB action, then we get a partial week and then boom; it’s over until bowl season. It’s time to get in while the getting is there. It doesn’t last forever. You want to know how fast this stuff fly’s by? This time next week I will be reading this article while enjoying some Ham and Turkey with the in-laws. With that in mind, I encourage you to take advantage of this sport while it’s still around. On Joust we get another dose of tournament and here is the one team I put together in hopes of winning the Camelot: 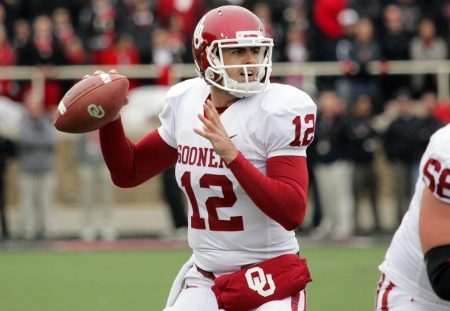 Landry Jones – OK, this guy laid an egg last week with one of the easiest matchups in the nation. This week is pretty juicy too. So if you got bucked off the horse, then just climb back on and ride this sucker some more.

John Hubert – This very well could be the Collin Klein show. However, I have a gut feeling Klein puts more on the plate of Hubert this week as it looks to me like Klein is wearing down a little. This could be a huge game for Hubert

Jeremy Hill – From the “WTF was that” department, I give you Jeremy Hill. This is a guy that put up 3 straight 100 yard games against the toughest teams in the nation to run on. He seized control of the LSU backfield. Then right when everyone was primed to jump on the bandwagon…he lays a complete dud against the easiest matchup in a month. I’m chalking the last performance up as a fluke and hoping for the former Hill to show up in this one.

Conner Vernon – He’s been pretty quiet for a few weeks now. I believe it’s time for a Conner Vernon sighting against Georgia Tech this weekend.

Justin Brown – So I have Landry Jones already. I need a good 1-2 punch. Justin Brown has been getting better and better each week. While Kenny Stills flopped last week, Brown was on the receiving end of one of the Landry Jones TD passes. For the much cheaper price I am rolling with Justin this week.

Darius Johnson – DJ was really a stud last year. This season he has come nowhere close to that status. He has had some good games, but also some real clunkers. It has driven his price way down though and it’s time to take advantage. Rice has a pathetic defense and it won’t take much for DJ to pay off this low salary.

Tyler Eifert – After closely watching Notre Dame for a few weeks now I will say this: No, I am not a believer. I think they will NOT finish the season undefeated. They possess a nice defense, but the offense is bad. They can run the ball for sure. However, their QB cannot complete passes to their WR’s. It’s Eifert or bust in the passing game. Wake Forest is not a good defense so I am thinking another 6 catches for 70 yards and a TD is in order here.

Washington State Cougars – They seem to be scoring points and this TK comes cheap. I got to cut salary here so I can afford this next pick

Florida State Seminoles – And here it is. I never..ever, ever, ever, ever (Chris Tucker in “Friday”, anyone?) pay this much for a defense. But I feel really good about this one. Maryland is one injury away from having to suit up their band director to play QB. You just cannot predict defensive TD’s, but I am going out on a limb here. The Noles find the end zone this week on special teams or defense. Book it!!!

And there is the Week 12, $22 Camelot winner on Joust in a nutshell. Quick word of advice- Purchase your turkey well in advance of Thanksgiving and let it sit in the fridge for a few days to start the defrosting. Once you’ve cooked it in the oven on Thursday, don’t be afraid to fire up the BBQ pit with some smoky wood chips and finish the bird off on the pit for about 20-30 minutes. That’s it for me, I am out.