Fading the Chalk: Can't Get No Respect 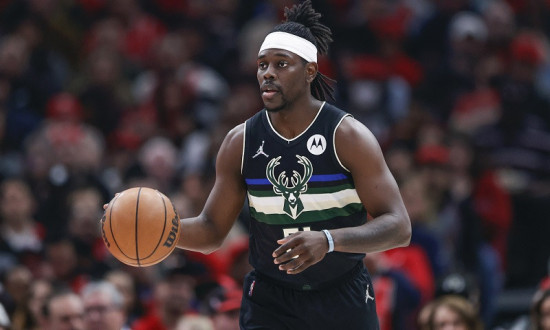 I had a bit of a setback with my recovery yesterday as my foot wasn’t thrilled with my attempts at walking and decided to wake me up in the middle of the night with a unique combination of pain and swelling.

As I was dealing with that around 3 am, I was also thinking about how slighted Jrue Holiday and Paul George would feel if they knew that I called their salaries “too expensive” just about every single day.

I wonder if that lack of respect is the motivation that is driving these guys to put up such elite numbers night in and night out this year?

My Lineup: The Team Giannis All-Stars

Let’s start at the bottom today with the two value plays that jumped off the page in Mohamed Bamba and Greg Monroe. The problem is that you had to pick one of them on FanDuel. I originally wanted to go with Monroe figuring that Toronto was just a better team, but swapped over to Bamba later in the day thinking that he would have more opportunity for the Magic.

I also saw Cheick Diallo as a possible money-saving punt play. He wasn’t going to put up a huge game, but at that salary, he wouldn’t have to do a whole lot to earn his keep.

On the stud side, you could have made a very good argument for Russell Westbrook, Giannis Antetokounmpo, or Anthony Davis. My first plan was to cram in both Russ and Giannis, but as I looked a bit deeper, I realized that there were two cheaper PGs that I really liked.

This PGs were De’Aaron Fox and Derrick Rose. And by not going with a second true stud, I was able to afford guys like D’Angelo Russell, Buddy Hield, Robert Covington, and Aaron Gordon.

Because this was a massive 12-game slate, there were tons of other options that all made sense, but these were the guys that seemed to offer the best combination of price and opportunity in my mind. 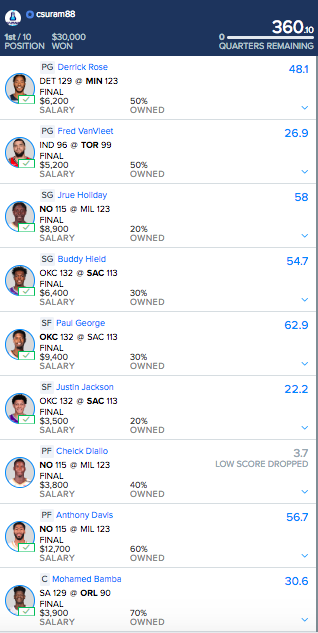 CSURAM88 took down the $5,300 NBA Beast with this lineup that started out the same way I did with Cheick Diallo and Mohamad Bamba. But Pete went even cheaper at PG with Fred VanVleet, and that gave him enough salary to get up to Anthony Davis and still fit Paul George. He also went down to Justin Jackson, which gave him even more flexibility in fitting Jrue Holiday and Buddy Hield. 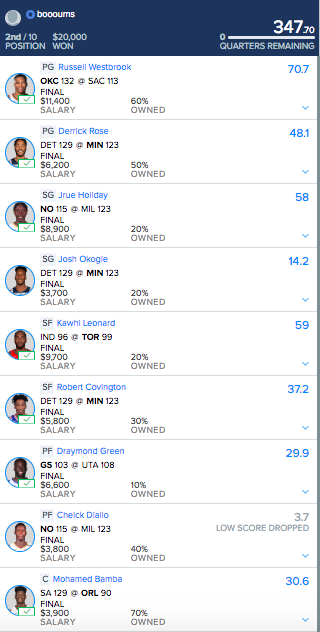 Booourns was right behind Pete with this lineup that started the same way with Diallo and Bamba, but then he went a different direction with Russell Westbrook and Kawhi Leonard as his studs. He was also able to fit Jrue Holiday, but he did it by stepping down to a super cheap Josh Okogie. 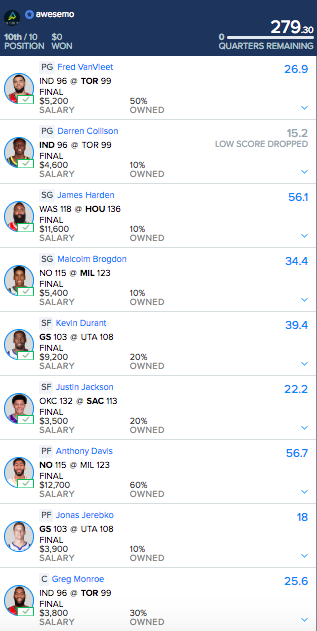 Awesemo was the dude bringing up the rear in the big money tournament. His lineup started out with two cheap guys, but he went with Jonas Jerebko and Greg Monroe instead of Diallo and Bambo. Then he rolled with the triple-stud combination of James Harden, Kevin Durant, and Anthony Davis and didn’t bother rostering Derrick Rose or Jrue Holiday like the other pros did. 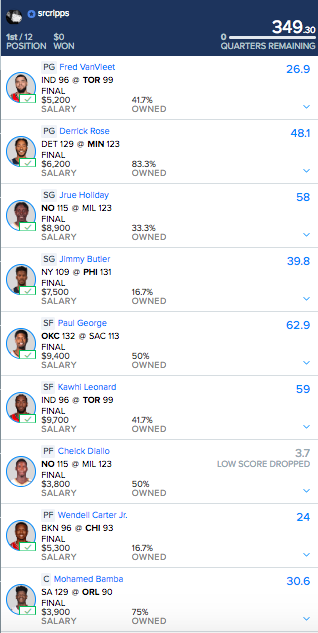 Scripps was the big winner in the AndyBowsers Slack Tournament with this lineup that paired Paul George and Kawhi Leonard at SF and still fit Jrue Holiday by going the cheaper route with Derrick Rose and Fred VanVleet at PG with some discount big men.

With 12 games on the main slate, there was a crazy number of options across the board last night. Too many. So if you missed something or decided to intentionally take a stand on a specific player or situation, don’t feel bad if it didn’t go your way.

My team played well, but I wish I would have embraced the upside of Paul George and Jrue Holiday a little bit more. I’m obviously not giving either of those guys enough credit for the way they are playing this season.

Sadly, we don’t have a great option to get back on track tonight with just two games on the schedule. I can’t imagine why TNT let’s the NBA get away with giving them such a short slate to pick from every Thursday. But a slate is a slate, so let’s get to work on that research and I’ll be back tomorrow with another edition of Fading the Chalk.