Fading the Chalk: Fading Brow With Break Your Heart…and Your Bankroll 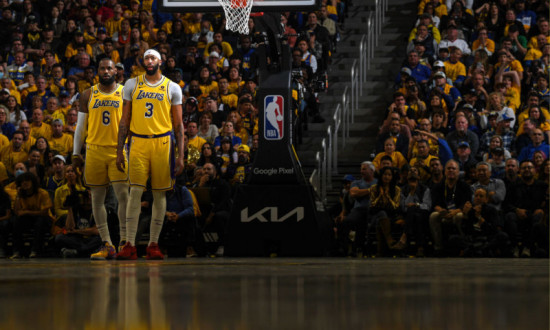 I usually don’t mess around with writing these posts on the weekends because everyone else, including me, is obsessed with the upcoming NFL slates. But I have zero interest in playing the garbage time NFL slate this weekend, so I think it’s time for the NBA version of Fading the Chalk to go back to seven days.

My Lineup: The Embracing News All-Stars 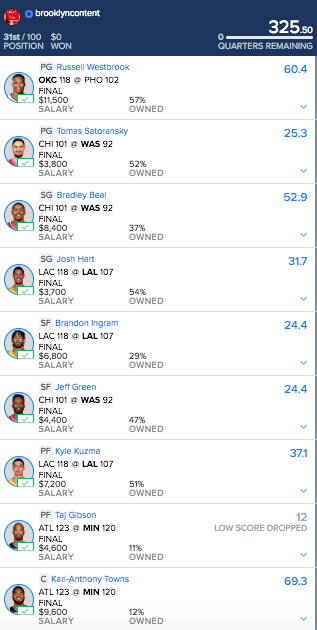 It was a wild afternoon for news yesterday, and that all started when we got word that Paul George was going to be taking the night off. That was a devastating blow for BigWilburStyle and his “play Paul George every night” strategy, but for me, it just meant that it was time to lock and load Russell Westbrook.

We also learned fairly early that John Wall was not going to be playing, and that Markieff Morris was doubtful. With those guys out, there were going to be minutes aplenty for Tomas Satoransky, Bradley Beal, Trevor Ariza, and Jeff Green.

On top of all of that news, we also had all of the Lakers value that was still just as good as it was on Thursday night, and just about all of the Timberwolves were in play as well, with Karl Anthony-Towns being one of the best plays of the night.

Once again, we had so much value out there that it was not going to be a problem to fit whatever studs I wanted to play. My plan was to start with Russell Westbrook and Bradley Beal up top, and then to fill in with value as I worked my way down to either Anthony Davis or Karl Anthony-Towns.

The obvious value guards were Tomas Satoransky and Josh Hart, but I had a few different options at SF, including Brandon Ingram, Robert Covington, Trevor Ariza, Jeff Green, and Lance Stephenson. Best to finish everything else and then just optimize to see what fits best here.

The options that I strongly considered at PF were Anthony Davis, Kyle Kuzma, and Taj Gibson. And while I didn’t mind pairing Kuzma and Taj, there really wasn’t anyone below Karl-Anthony Towns that I wanted to play at C. So with that, I once again made the decision to fade Brow in a good spot knowing full well that I was potentially signing my own death certificate on this slate.

With a bottom three of Kuzma, Gibson, and Towns, I was able to fit Brandon Ingram and Jeff Green at SF and this lineup was ready for action. 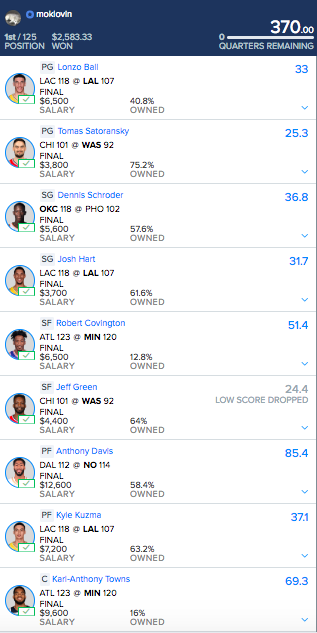 Moklovin took second in the $222 Single Entry Tournament with this lineup that ignored the Paul George news but embraces the John Wall news. Skipping Russell Westbrook allowed him to pair up Anthony Davis with Karl-Anthony Towns and still fit Kyle Kuzma and Robert Covington. 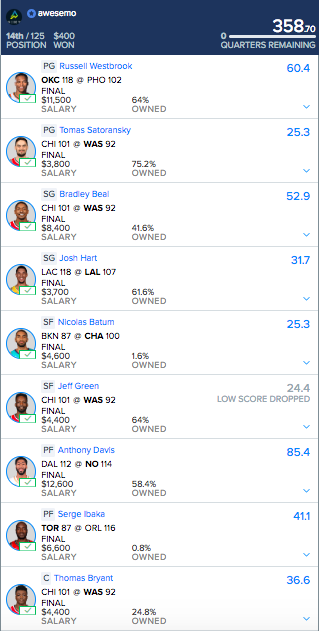 Awesemo went a different direction and came down off of Karl-Anthony Towns all the way down to Thomas Bryant, which allowed him to play Russell Westbrook along with Anthony Davis. He also got creative with playing Nicholas Batum and Serge Ibaka. 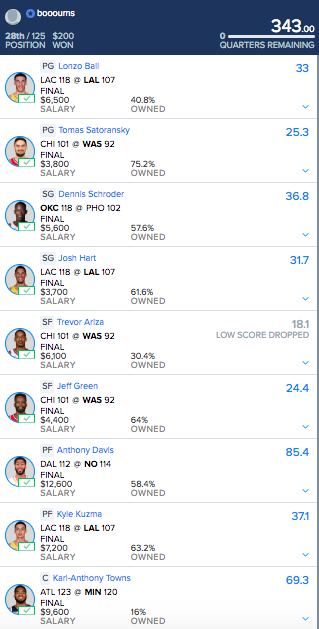 Booourns put together the exact same lineup as Moklovin except for the slight tweak of going with Trevor Ariza over Robert Covington. Unfortunately for him, Ariza only put up 18 compared to the 50-burger for BobCov. 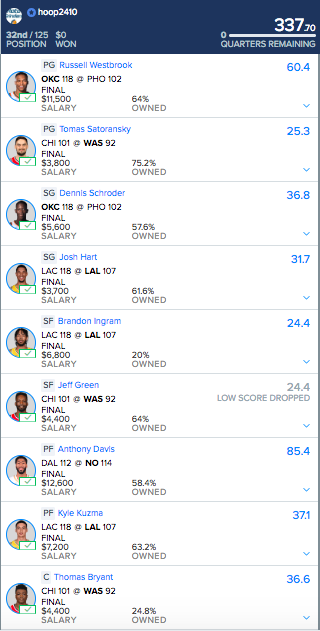 Hoop2410 was right outside the money with this Westbrook/Davis lineup that stuck with Dennis Schroder instead of moving up to Bradley Beal. 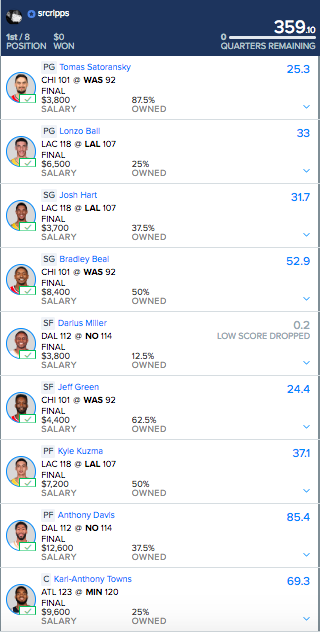 Scripps was the top score in the AndyBowsers Slack Tournament…again…with this lineup that took the same Davis/Towns approach we saw from Moklovin. The one place that Sripps differed from Mokloving was that he stepped up to Bradley Beal by playing some Pelicans dude that no one has ever heard of as a pure punt. Dig it. Keep winning, brother!

I said going into the slate that I was going to regret not having Anthony Davis. Sure enough, I did. But I also wasn’t comfortable coming off of Russell Westbrook, and I really didn’t like the idea of stepping all the way down to Thomas Bryant.

In hindsight, the right move was to stick with Lonzo Ball and Tomas Satoransky and then have the money for Brow and Towns, but there is also a good chance that I don’t feel that way if Westbrook goes off for 80+ and Brow has a pedestrian night of 60.

That means that the big takeaway today is that I have to hang my hat on the fact that I had the right player pool and just picked the wrong guys out of that pool. And in my experience, having the right player pool is the key to everything, so I’m going to choose to be happy with my decisions despite my results.

And of course, we also have a brand new slate to tackle tonight. Let’s get to work on that research and I will be back here tomorrow for a special SUNDAY edition of Fading the Chalk!