Fading the Chalk: Has NFL DFS Passed Me By? 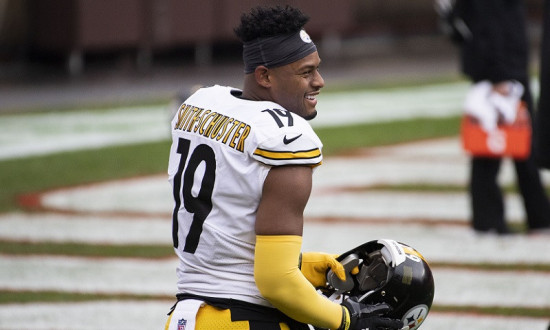 After spending another Sunday sitting through “seven hours of commercial-free football” on the RedZone Channel, I was left with the same empty feeling that I seem to have every week when my lineup fails to live up to expectations.

I went out of my way to avoid guys that were likely to bust, but I still ended up with quite a few of them. And that has me wondering if maybe the NFL DFS game has simply passed me by this year.

On the bright side, my Achilles recover is moving right along and I’m sitting up with both feet on the floor as I write this, so that’s a huge win regardless of where my FanDuel balance is sitting.

My Lineup: The Chalky McChalk All-Stars 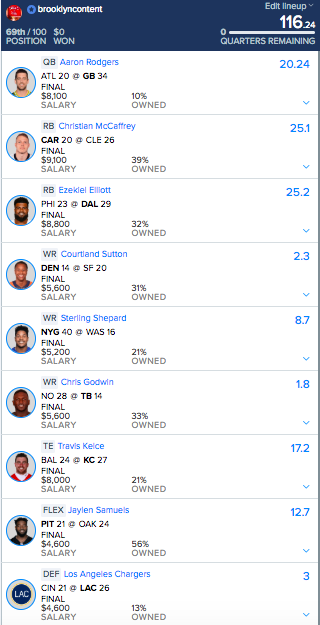 After sitting on the couch all weekend and listening to most of the RG podcasts, I had what felt like a solid plan going into my Sunday morning roster construction.

I knew that I wanted to pair up Christian McCaffrey and Ezekiel Elliot as my workhorse backs with Jaylen Samuels as my discount RB in the flex spot. Then I wanted to pay up for a still-too-cheap Travis Kelce and also find a way to fit Aaron Rodgers in what should have been a big F-U game for him.

In order to make all of that fit, I was going to have to go super cheap at WR. Fortunately, guys like Courtland Sutton, Sterling Shepard, and Chris Godwin were sitting right there waiting for me.

Then I finished with the Chargers D because they were a huge home favorite.

Now let me double back for a minute and talk about the guys that I wanted to avoid.

I believe that story from a few weeks ago about the Giants avoiding giving Odell Beckham Jr. and Saquon Barkley the ball in the second half, so I was off of Barkley.

Then I didn’t want to play anyone in the soggy Tampa rain game, so I stayed away from Jameis Winston and Alvin Kamara, although I did spring for “(player-popup #chris-godwin)Chris Godwin”:/players/chris-godwin-37002…but he was just too cheap. 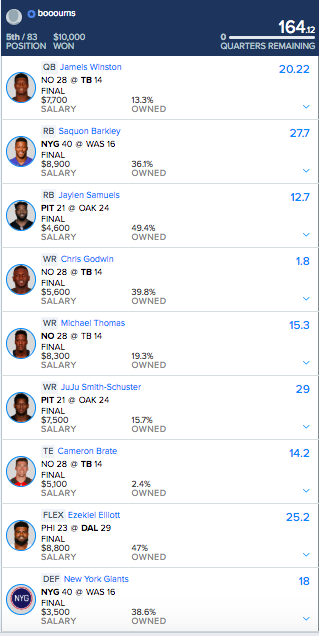 Despite rostering Chris Godwin, Booourns had a big day by pairing Saquon Barkley and Ezekiel Elliott with Jaylen Samuels. That’s not far from what I started with, but he was willing to go cheap at TE with Cameron Brate, which freed up enough salary to get up to Michael Thomas and JuJu Smith-Schuster. And don’t forget that Giants D! 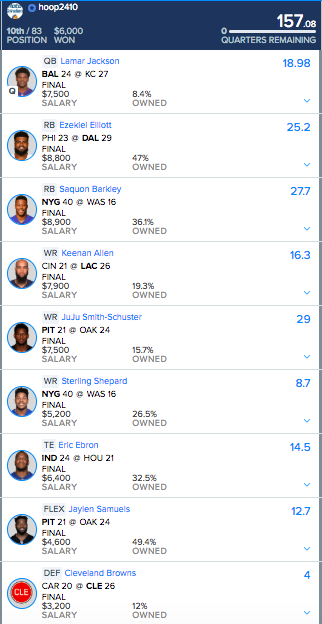 Hoop2410 had a similar build, but he went with Keenan Allen and Sterling Shepard instead of Michael Thomas and Chris Godwin. Combine that with stepping down to Lamar Jackson and the Browns D and he was able to move up to Eric Ebron at TE. 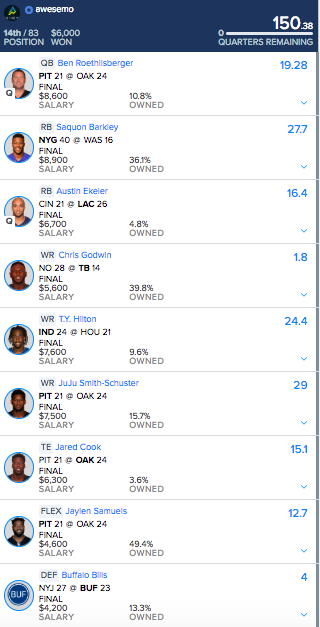 Awesemo went cheaper at RB by stepping down from Ezekiel Elliot to Austin Ekeler. That gave him the extra salary needed to get up to Ben Roethlisberger, who put up a solid game despite sitting out for most of the second half. 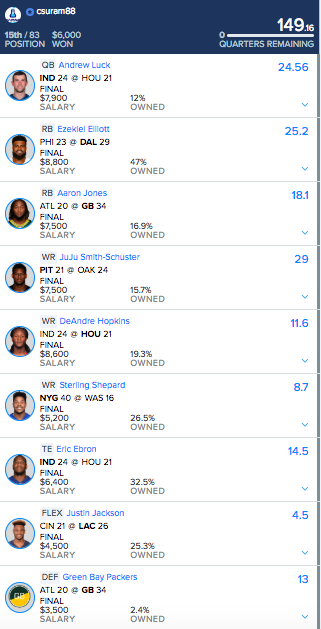 I’m going to include one more lineup here just because CSURAM88 was able to cash in this big time tournament despite taking a 4.5 from Justin Jackson and a light day from DeAndre Hopkins. The key is that he nailed everything else.

Once again, I wasn’t far off from the guys that cashed in the big money contests. But I also didn’t have the key guys that set them over the edge. None of those experts paid up for Travis Kelce against the Ravens Defense, and they all spent more money on WRs that I did.

I was also out on an island with Aaron Rodgers and the Chargers D. I also didn’t pair any pass catchers with my QB, or any RBs with my defense.

Fortunately, we are back on that NBA grind with a nice big 11-game slate to tackle. Let’s get to work on that research and I’ll likely see you back here tomorrow with another edition of Fading the Chalk.

Did you play the NFL slate yesterday? How did you do? Did you fall into the traps of playing guys who didn’t produce? Or did you crush and find yourself up at the top of your contests? Either way, leave a comment and let me know what went into your process!