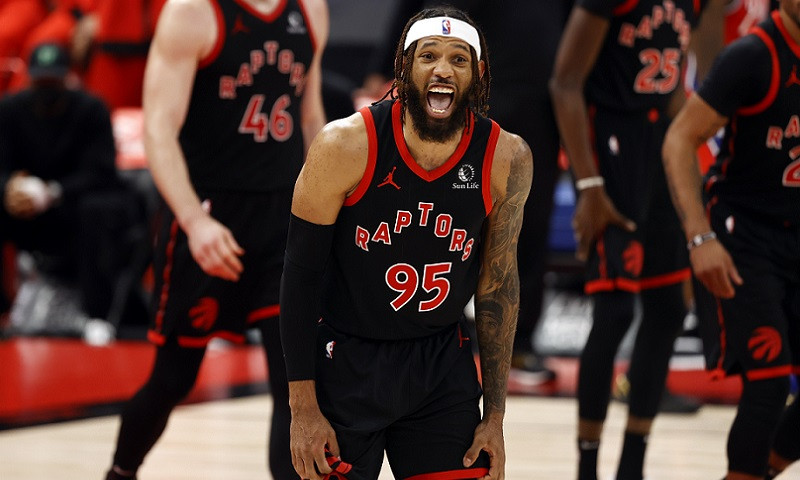 I have been working extremely hard to get a new project up and running at work over the past week or so, and when you combine that with my Achilles rehab, I haven’t had my normal allotment of time to devote to DFS research and reviews.

Unfortunately, that lack of time is showing up in my results. But now that everything is moving in the right direction on both fronts, I should be able to get back to my winning ways here over the next few weeks.

Let’s start that return off on the right foot by reviewing all of the bonehead mistakes that I made last night.

My Lineup: The Lakers/Bulls All-Stars 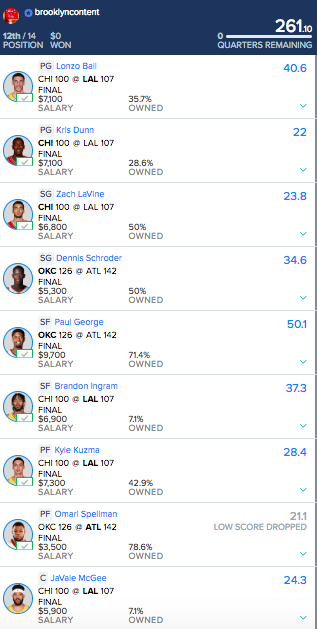 Hindsight is 20/20, but what on earth was I thinking running those Bulls guards last night? Clearly, there is something wrong with my game that needs to be addressed.

I started out with a simple plan of pairing the value of Omari Spellman with Paul George as my stud. Then I definitely wanted to get Brandon Ingram and Kyle Kuzma involved, and I was pretty open to other options from there.

Dennis Schroder and Lonzo Ball were my next guys in, and Zach LaVine seemed like the likely guy to do something if the Bulls were able to hang with the Lakers. Then if I went down to JaVale McGee at C I could take my pick of Kris Dunn or Trae Young. I figured that if I was going all in on Lakers and Bulls, then I might as well go all in. 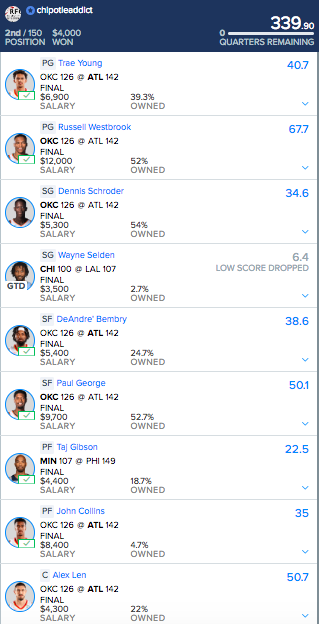 ChipotleAddict went all in on a Hawks stack. Then adding Wayne Seldon and Taj Gibson as cheap punts gave him enough salary to cram in Russell Westbrook along with Paul George and Dennis Schroder. Huge nights from all of the Hawks. 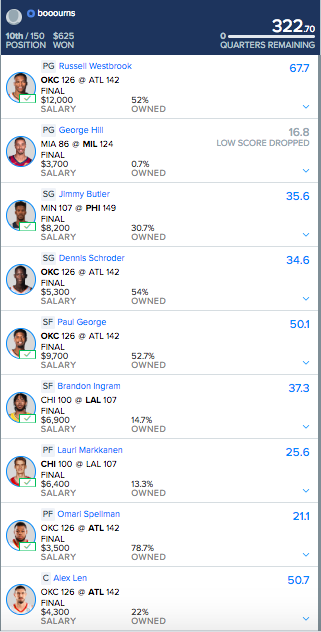 Booourns got the same big night from Alex Len, but he used Omari Spellman instead of John Collins, which saved him enough salary to work in guys like Jimmy Butler and Brandon Ingram. 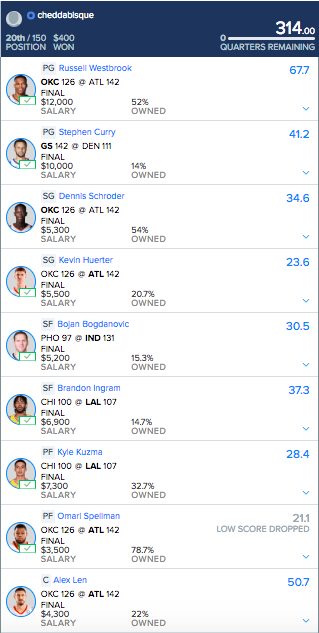 CheddaBisque was one of the few people who skipped over Paul George. Instead, he locked up some serious points up top with Russell Westbrook and Stephen Curry. Then he worked in the Hawks value with the two key Lakers plays. 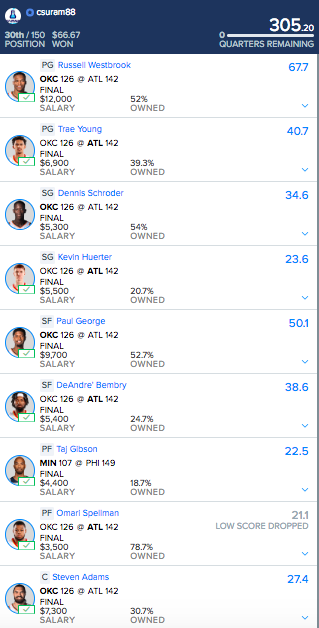 CSURAM88 was one expert that didn’t go all the way down to Alex Len, and he was still able to make it up to Russell Westbrook by skipping out on paying for the Lakers guys. But it looks like anyone who stacked up that OKC/ATL game did well last night. 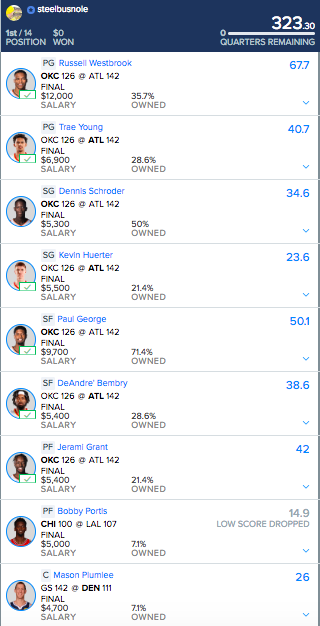 Steelbusnole was the top score in the AndyBowsers Tournament last night with this lineup that featured plenty of exposure to Thunder and Hawks players.

I would love to use the fact that I didn’t have access to late news at work last night as an excuse, but as I look back at my notes from about 2 pm yesterday, all of the things that I needed to know were already there.

That’s why today’s big takeaway is to trust Vegas and focus in on the highest team totals. I didn’t do that yesterday, and I ended up with a horrible lineup of Lakers and Bulls with not nearly enough exposure to Thunder or Hawks players.

Fortunately, we have a brand new slate in front of us today, so I am going to dust off all of that negative energy and get back to work figuring out today’s puzzle. Let’s get to work on that research and I’ll see you back here tomorrow with another edition of Fading the Chalk.