Fading the Chalk: I Almost Won Without Any Sixers 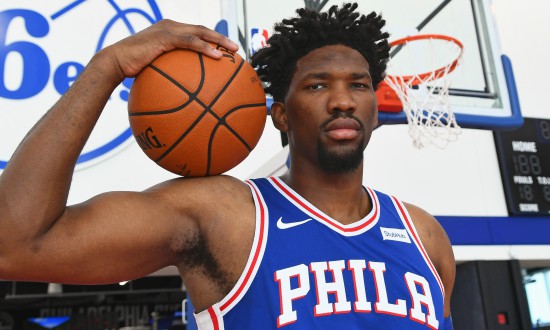 I had a nice score last night, and it was good enough to min cash in enough tournaments to turn a profit, but it wasn’t the legendary, win-all-the-money night that I was hoping for when I saw some of the scores that my guys put up.

My Lineup: The Almost Perfect All-Stars

My original plan yesterday was to try to use Emmanuel Mudiay or Colin Sexton along with JJ Redick, Harrison Barnes, Larry Nance, Jr., and Noah Vonleh as my cheaper/value guys. Then I wanted to pay up for Russell Westbrook, Luka Doncic, Paul George, and Joel Embiid.

Obviously, I’m not great at math, because that didn’t even come close to fitting.

So at that point, I made the decision that if I couldn’t afford Joel Embiid, then I would move all the way down to Kevon Looney.

Then, when the news broke that Jaylen Brown wasn’t going to play, I was able to step down from JJ Redick to Marcus Smart, and that would save me enough salary to move up from Noah Vonleh to my man Marcus Morris.

I also elected to go with Emmanual Mudiay over Colin Sexton because the Knicks were slight favorites over the Cavaliers, which gave them the higher team total. And I probably had a bit of a bias towards Mudiay because I can remember him putting up 40 a few weeks ago. 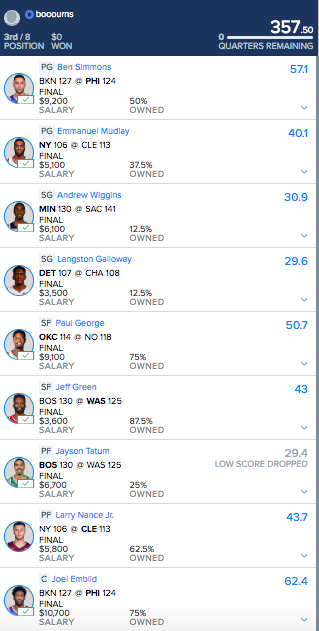 Booourns was on a lot of the same guys that I was, but he stuck to Joel Embiid and stepped down from Russell Westbrook to Ben Simmons. He also went cheaper than I did with guys like Langston Galloway and Jeff Green. 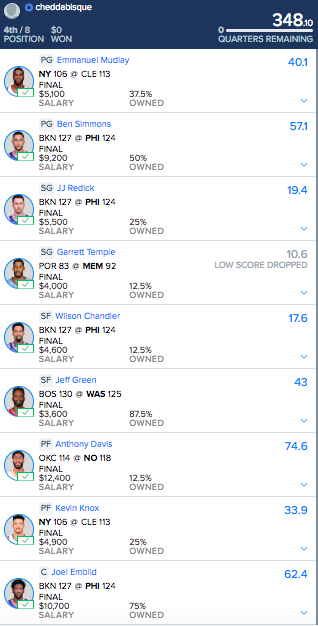 CheddaBisque took that approach to the next level and was able to fit Anthony Davis in with Ben Simmons and Joel Embiid by going with guys like Garrett Temple, Wilson Chandler, Jeff Green, and Kevin Knox. 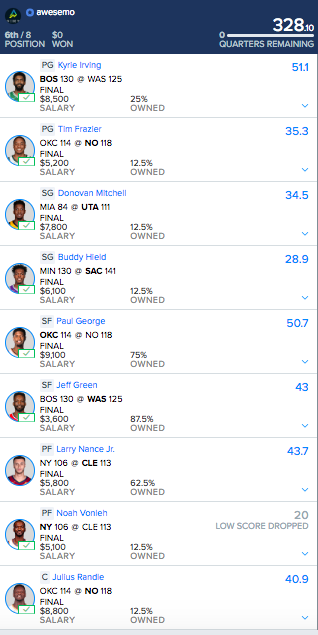 Awesemo went a totally different direction and faded Simmons and Embiid in favor of Kyrie Irving and Julius Randle. But he used those savings to pay up for Donovan Mitchell and Buddy Hield, which didn’t work out well for him at all. 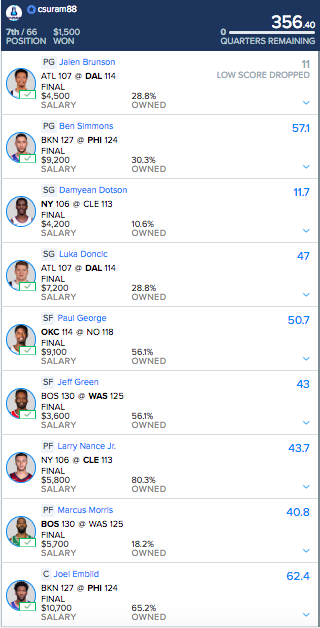 My man CSURAM88 had a nice version of the Ben Simmons, Paul George, Joel Embiid framework that he was able to fit together by going down to Jalen Brunson, Damyean Dotson, and Jeff Green. 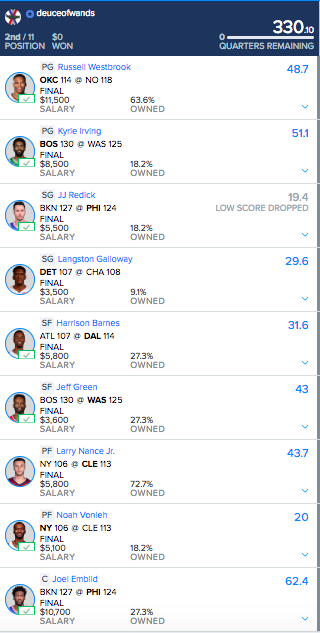 I was the winner in the AndyBowsers Slack Tournament, but I should note that DeuceofWands came in second. I gave him a hard time about playing Langston Galloway while encouraging him to stick with JJ Redick and Noah Vonleh. Whoops!

Big slates are usually fun because they give us plenty of options, but those big slates can also create situations where there are a lot of different ways to win. A ton of guys went off last night, and what would have been a dynamite score on any other night wasn’t all that impressive on this night.

If you just missed a cash line despite having some great plays in your lineup, don’t beat yourself up too much. If your process was sound, then those good plays will show up on nights with lower scoring too. Just be patient.

Now let’s dive into that research for a short Thursday night slate and get ready for some more fireworks tonight!