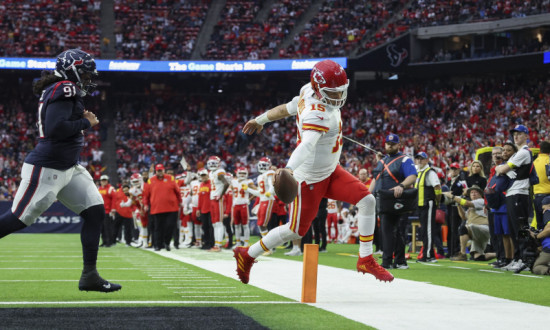 I said that I wasn’t going to get caught up in playing the last regular season NFL slate of the year. I didn’t want to mess around with trying to figure out which teams were actually trying to win and which ones were happy to just get the season over with.

But then, about 30 minutes before kickoff, I realized that I had one friends league that was still going to be playing. I had to kick in the ten bucks either way, so I might as well see if I could put together a decent lineup in a hurry.

And if I’m putting together a lineup, I might as well enter it in some other contests as well! And that’s how you know you have a problem. Oh well, let’s get into the lineup.

My plan of attack has been the same for most of the NFL season. I like to find three solid RBs, and then use what I have left to pair up a QB with a pass catcher and fill in the rest.

Yesterday, the three RBs that seemed to have the best combination of price and upside, focusing mostly on upside, were Saquon Barkley, C.J. Anderson, and Jamal Williams. And with even Saquon being reasonably priced, I felt that gave me enough room to squeeze in Patrick Mahomes and Travis Kelce.

From there, I needed three WRs with upside, so I locked in Tre’Quan Smith and Chris Godwin for some value, and that left me just enough for JuJu Smith-Schuster if I was willing to play the super cheap Buffalo Bills Defense.

As with most weeks this NFL season, I have no idea how sound any of these decisions were. That’s why we also need to look at some of the expert lineups. 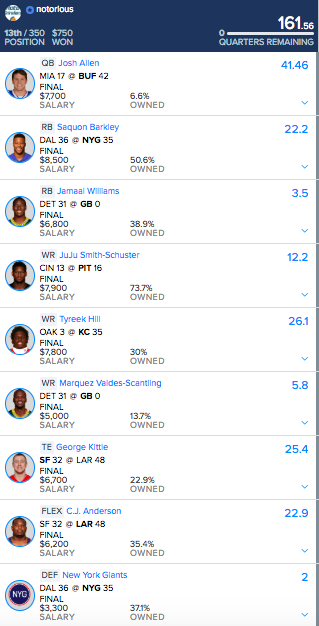 Our buddy Notorious found himself near the top of the $222 Single Entry Tournament with this lineup that took my three RBs and JuJu but stepped down to Josh Allen and George Kittle in order to move up to Tyreek Hill as well. Hindsight is always 20/20, but I really feel like I should have saw this as an option. 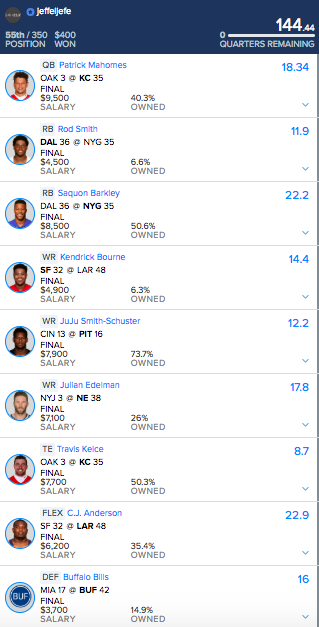 This lineup from JeffElJefe made me feel pretty good about my choices. He had almost the exact same lineup as me, except he swapped out Jamal Williams for Rod Smith and the replaced my two cheap WRs with Julian Edelman and Kendrick Bourne. 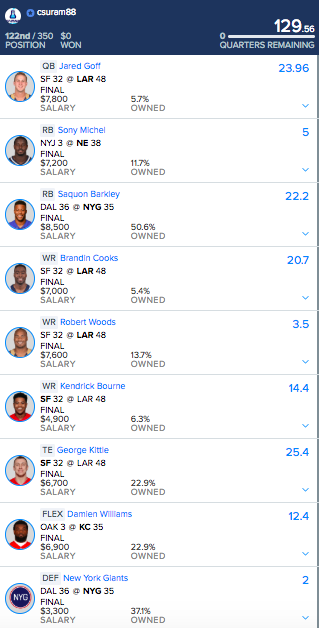 Pete swapped out C.J. Anderson for a Jared Goff to Brandin Cooks and Robert Woods stack. Woods wasn’t great, but the play that really crippled this lineup was Sony Michel. There were a few guys in my friends league who also fell victim to that play.

Despite the fact that I did well in cash games yesterday, I pretty much lucked into that money thanks to three touchdowns from Tre’Quan Smith and Chris Godwin. And one thing I definitely know from experience is that you can’t count on that kind of production from bargain basement WRs week in and week out.

So with that in mind, the big takeaway this morning is that football is officially over. It’s time to move on and focus 100% of my energy to the NBA season, which has actually been treating me pretty well so far this year.

There is a five-game main slate on tap tonight that I fully intend to dominate. So let’s get to work on that New Year’s Eve research, and I’ll be back here tomorrow morning with another edition of Fading the Chalk.

Did you play the NFL slate last night? How did you do? Did you fall into the traps of playing guys who didn’t produce? Or did you crush and find yourself up at the top of your contests? Either way, leave a comment and let me know what went into your process!