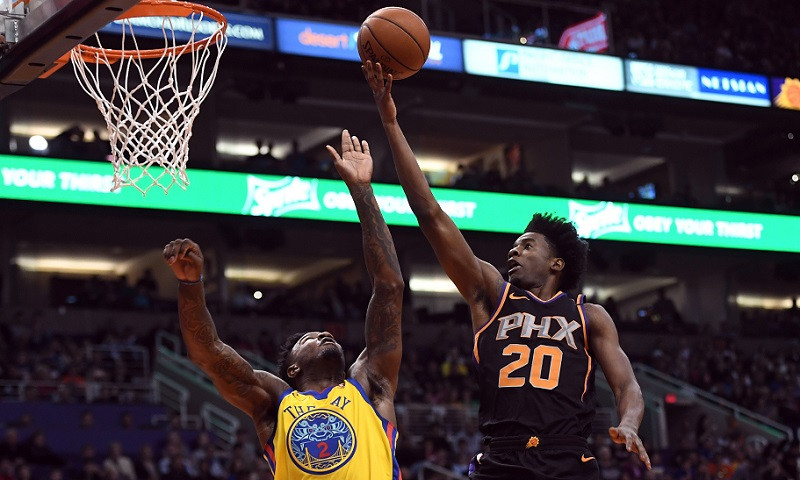 I had positive news to report on my Achilles recovery yesterday, but I made some even bigger news last night when I was able to put on a pair of shoes. It wasn’t pretty because my foot is still pretty swollen, but I got it on and managed some steps. We’re almost home.

As for the NBA slate, I don’t know that I would have gotten through the past few months with such a positive attitude without NBA DFS, so I couldn’t wait to dive in and start working on solving the Wednesday night puzzle.

My Lineup: The Harden & Giannis All-Stars

The first time I worked my way through the starting lineups and prices, the only guy that jumped out at me was Domantis Sabonis. Then, once we got confirmation that Devin Booker was going to be out again, De’Anthony Melton, Kelly Oubre, Jr., and Josh Jackson jumped up on my list.

My original plan was to go cheap with Jae Crowder at SF and someone like Alec Burks at SG. That would allow me to fit James Harden along with Ben Simmons and Joel Embiid.

However, after spending some more time thinking about it, I realized that I was going to see a lot of expert lineups with James Harden and Giannis Antetokounmpo when I woke up in the morning. How were they going to make that happen?

The answer that I came up with was going down to Collin Sexton and Jordan Clarkson, and then coming down to Jarrett Allen at C.

I didn’t love the idea of playing two guys from Cleveland with one of the lowest team totals on the slate, but they were both going to have the opportunity to get plenty of minutes, and that’s what I thought the experts might do. Now, let’s see if I was right about that. 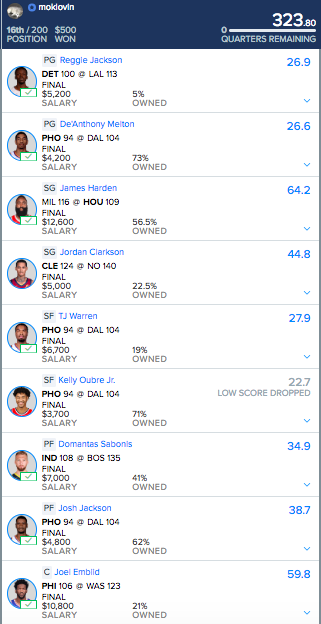 Close, but not quite. In the $222 Single Entry Tournament, Moklovin came down to Reggie Jackson and TJ Warren in order to move up to Joel Embiid at C. I understand the motivation to get up to Embiid, and Warren was definitely on my radar, but I really never even considered Reggie Jackson. 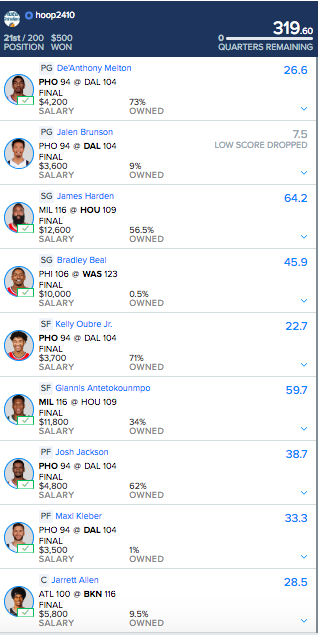 Hoop2410 was in on James Harden, Giannis Antetokounmpo, and Jarrett Allen, but he went double cheap at PF with Josh Jackson and Max Kleber. He also went way cheap with Jalen Brunson, which allowed him to get all the way up to Bradley Beal as his second SG. 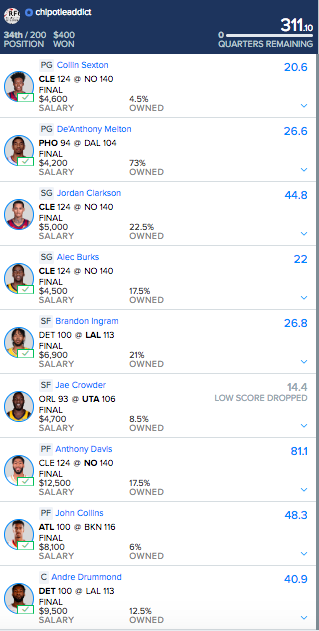 ChipotleAddict was way outside the box with De’Anthony Melton as his only Suns player. He also got contrarian with his studs and went with the combination of Anthony Davis and Andre Drummond. John Collins was also a low-owned play that really paid off for him. 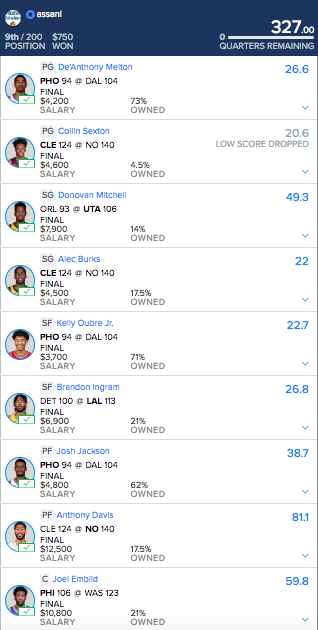 Assani was up in the top ten with this lineup that paired Anthony Davis with Joel Embiid and also got a big game out of Donovan Mitchell. It’s interesting to note that he was the second expert lineup that went with Brandon Ingram over a similarly priced TJ Warren. 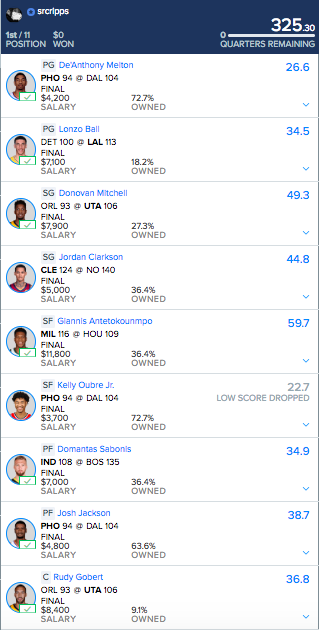 I had a strong showing, but Scripps was the top score in the AndyBowsers Slack Tournament last night with this lineup that stepped down from James Harden to Donovan Mitchell. The salary savings from that move allowed him to upgrade to Lonzo Ball and Rudy Gobert. And with Mitchell going for almost 50, fading Harden didn’t really hurt.

I did better than min cash in every tournament that I entered last night, and that was awesome. But I’m still not sure that I did the right thing by moving off of Joel Embiid up to Giannis Antetokounmpo. But even if I was wrong on that one, I still saw every one of my players pop up on expert lineups, so I definitely had the player pool right last night.

On account of all that, I am going to say that the big takeaway today is that what I said yesterday about sticking to your process actually works. I didn’t think there were any good plays at all as I was working through the rosters yesterday, but I still managed to isolate the best options. The process is sound.

We will get to put that process right back to work again tonight with a short four-game slate that is actually an improvement over the previous few Thursday night slates. Let’s get to work on that research and I’ll see you back here tomorrow for another edition of Fading the Chalk.