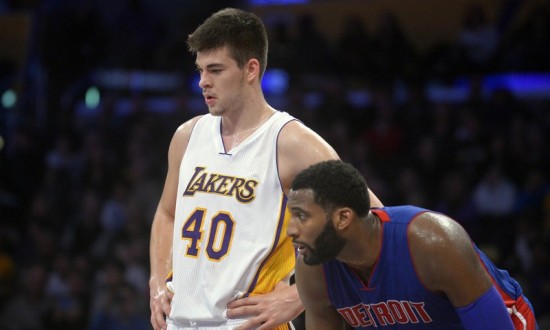 It’s not every day that you get to lead off a DFS article with a picture of Ivica Zubac, so let’s all take a minute to appreciate that.

And now that we have that in order, I hope your Christmas Day slate was filled with just as much food, wine, beer, and cookies as mine was. And if you’re just as happy to get back to your normal routine as I am, then Merry Day-After-Christmas to you as well!

I get angry about halfway through the Christmas Day slate every year, but things went a little bit better than normal for me yesterday, so I have nothing to complain about right now. Let’s get into it!

My Lineup: The Giannis and Harden All-Stars

I always try to start my process by isolating the value plays that are going to make my lineup work, and the key one yesterday was obviously Ivica Zubac. But on top of that, I also liked Danuel House, and to a lesser extent, Rajon Rondo and Jonas Jerebko.

Starting with that framework, I was probably going to have enough salary to fit two studs, and the obvious plays there were James Harden and Giannis Antetokounmpo.

From there, I filled in with Emmanuel Mudiay and Kyle Kuzma, which left me enough salary for Tim Hardaway, Jr. in my last spot. 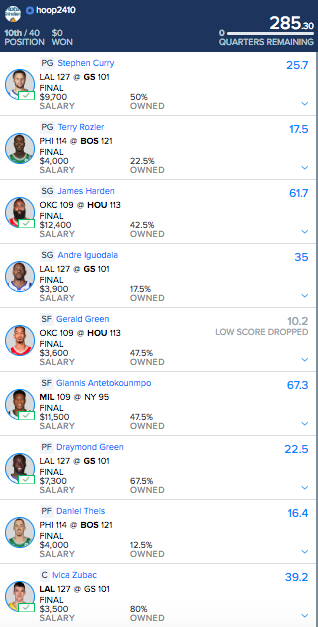 Hoop2410 looks like he started with a similar framework to what I came up with, but he went even more stars and scrubs and was able to fit Stephen Curry and Draymond Green along with James Harden and Giannis Antetokounmpo. He did that by loading up on cheap guys like Terry Rozier, Andre Iguodala, Gerald Green, and Daniel This along with Ivica Zubac. 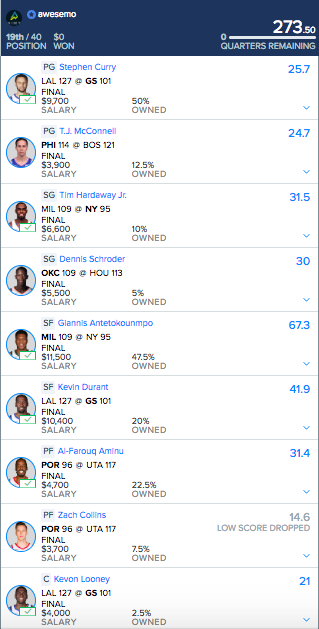 Awesemo also rolled with three studs, but he opted for Kevin Durant over James Harden, which allowed him to fit Tim Hardaway, Jr. and Dennis Schroder as his SGs. Then he went super cheap at PF with Al-Farouq Aminu and Zach Collins. 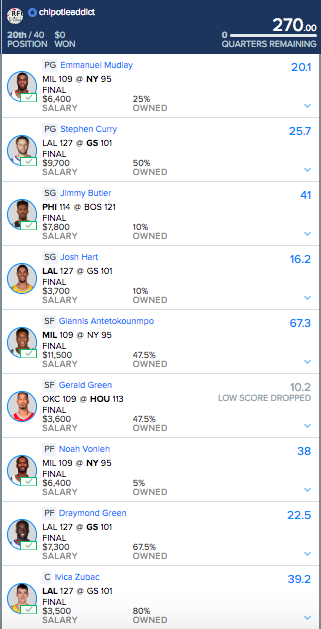 ChipotleAddict was probably the closest thing to fair and balanced with this lineup that was anchored by Stephen Curry and Giannis Antetokounmpo. He skipped out on James Harden in favor of Jimmy Butler and Josh Hart, and that allowed him to fit Emmanuel Mudiay as his second PG along with Draymond Green and Noah Vonleh down at PF. 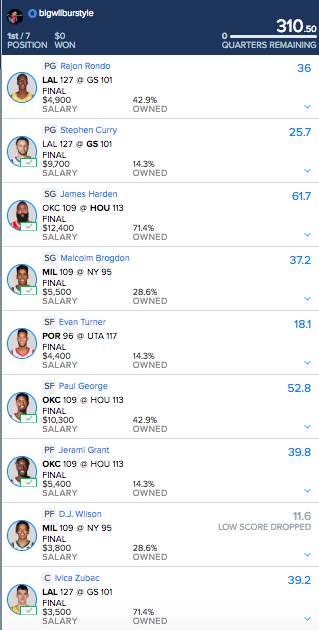 BigWilburStyle was the top score in the AndyBowsers Slack Tournament with this lineup that stuck to his new strategy, which he describes as “I just play Paul George every slate.” It’s working.

Coming down to Paul George allowed Wilbur to easily fit Stephen Curry and James Harden, but it was actually guys like Rajon Rondo, Malcolm Brogdon, and Jeramy Grant that pushed his score up over 300.

The Christmas Day slate is a tough one every year because you have to set your lineup at noon for a slate that includes 10 pm games. That part is not fun, but sitting around watching hoops all day sure is.

If you did well yesterday, take some time to enjoy it this morning. If you didn’t, don’t worry about it. But either way, it’s just another five-game slate, so let go of your results and move onto the next one.

Fortunately, we have a brand new 10-game slate to break down today. Let’s get to work on that research and I’ll be back tomorrow with another edition of Fading the Chalk.