Fading the Chalk: Russ Laughing at the Faders 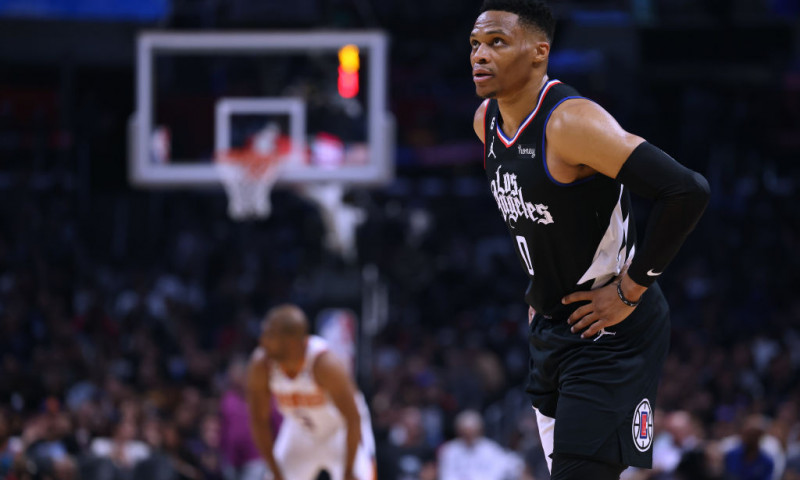 Remember those stretches over the past few years where you simply couldn’t fade Russell Westbrook at any price? We’re not necessarily back to that, but you likely didn’t do very well without him last night.

This was another frustrating slate for me, but I have to keep reminding myself that the only way to get better and fix mistakes is to take an honest look at them with a calm mind the following day. So with that in mind, let’s get to work.

My Lineup: The Trash Performance All-Stars

Heading into last night’s slate, my primary goal was to get as much upside into my lineup as possible while avoiding any potential pitfalls. Pretty much the same thing that I try to do every night.

In my mind, the first guy that I wanted to lock in was Bismack Biyombo, who provided some much-needed salary relief. That would allow me to get up to guys like Kemba Walker, Devin Booker, and Paul George.

From there, I filled in my open guard spots with Fred VanVleet and Dennis Schroder. Then if I went down to Kelly Oubre, Jr. or OG Anunoby, I had just enough to finish out with Pascal Siakam and Serge Ibaka.

When it was announced that Kyle Lowry was playing but Fred VanVleet was going to start for Kawhi Leonard, I left FVV in my lineup and swapped out OG for Oubre. 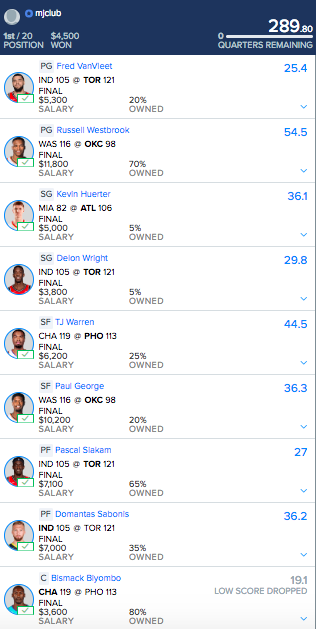 MJClub took down the $535 Rainmaker with a lineup that started out trying to do the same thing I did with going down to Bismack Biyombo for value. But he skipped Kemba Walker and Devin Booker in favor of Russell Westbrook and TJ Warren. Then he got great games from cheap SGs and moved up to Domantis Sabonis instead of Serge Ibaka. 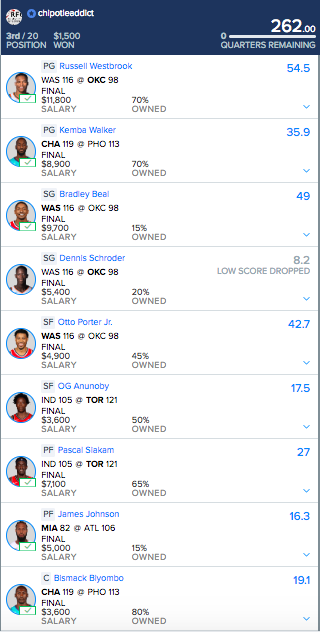 ChipotleAddict made the double-cheap-SF approach work by jamming in Russell Westbrook, Kemba Walker, and Bradley Beal up top. Combining those three with a huge game from Otto Porter, Jr. was enough to get him deep into the money pretty much everywhere. 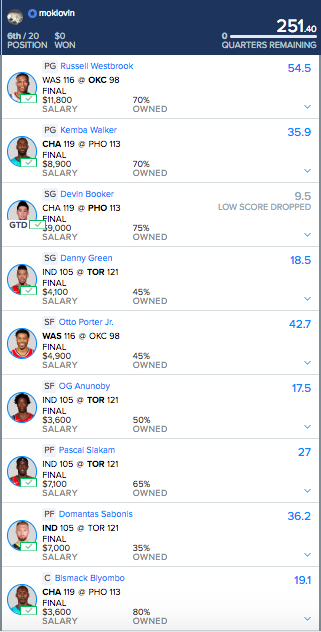 If I would have swapped my Paul George play for Russell Westbrook, I probably would have landed on something similar to this lineup from Moklovin. But I likely would have come off of Otto Porter, Jr. in order to play TJ Warren and stepped down from Domantis Sabonis. 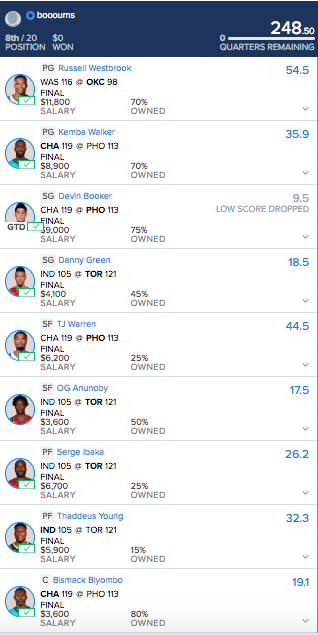 That version of the Moklovin lineup I was just talking about is pretty much what Booourns went with. I could have gotten on board with this, but it obviously didn’t do a whole lot better than the lineup I rolled out. 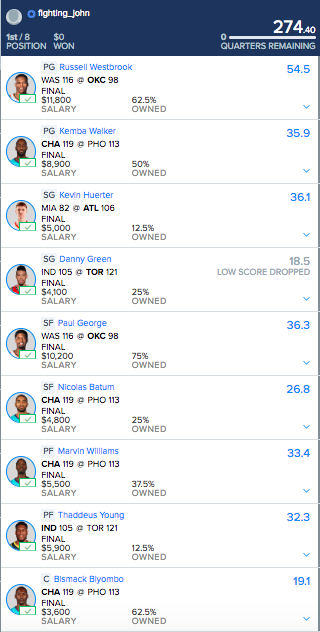 FightingJohn was dropping stunners left and right in the AndyBowsers Slack Tournament with this lineup that combined Russell Westbrook and Paul George and also paid up for Kemba Walker. Then he got that big game from Kevin Heurter and the rest of his role players came through with solid lines.

It feels like it’s been a good while since I’ve had a strong NBA lineup. When that happens, the key for me is to get back to basics and continually ask myself what the experts are going to do on a slate and how that compares to what I am attempting to do.

Fortunately, we have a very nice eight-game slate to break down tonight. Let’s get to work on that research and get that money tonight! I have an early doctor appointment tomorrow, so I’m going to take the day off from Fading the Chalk, but I’ll be back on Wednesday morning to let you know how it went.