Fading the Chalk : The All Lakers Slate 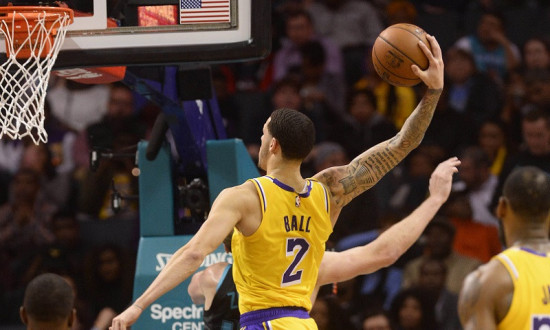 With LeBron James out and the most games we’ve had on a Thursday night slate all month long, last night was sure to be fun and exciting…but then it actually delivered on that promise with high-scoring games and all kinds of value guys going off.

I was happy to go to bed a loser on Wednesday and wake up a winner yesterday morning, but the opposite happened to me last night as the cash lines slipped away from me while I struggled to fall asleep after midnight.

My Lineup: The Lake Show All-Stars

Between the Lakers and the Kings, there were more good value plays on the board last night than any of us knew what to do with. And when that happens, the difference between winning and losing typically comes down to who can figure out the best way to put those pieces together.

With so much value out there, I decided to flip the script and start with my stud play of the night and lock in James Harden. From there, I paired him with Josh Hart, then got some extra value from Lance Stephenson and plugged in Lonzo Ball and Kyle Kuzma as my third and fourth Lakers.

On the Kings side, I didn’t have any more SG slots for Buddy Hield and I wasn’t going to be able to afford Willie Cauley-Stein, so I settled for De’Aaron Fox and Nemanja Bjelica. Then I finished out my lineup with Draymond Green and Brook Lopez.

I would have liked to come up off of Lopez, but I wasn’t willing to cut back on salary anywhere else, so I was kind of stuck there. Let’s check out what the experts did and see if I could have done something different if I came at it from a different angle.

JeffElJeffe was near the top of the $222 Single Entry with this lineup that paired Giannis Antetokounmpo and Kevin Durant at SF. My first instinct was to write off this lineup as extremely contrarian, but then I noticed that Luke Kornet posted 36.1 and was over 40% owned, so that was the piece I totally missed on last night. 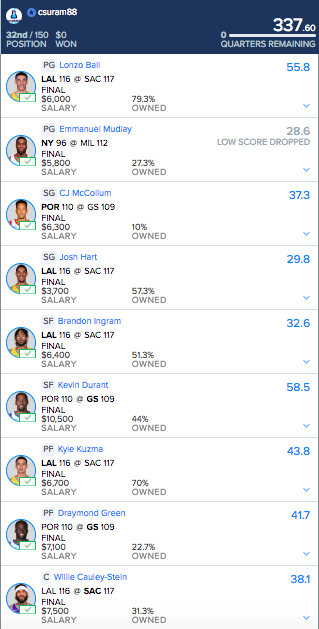 CSURAM88 was also on a different page than I was with this lineup that rocked Kevin Durant instead of James Harden, stepped down to Emmanual Mudiay as the second PG, and then had enough salary left for Willie Cauley-Stein. 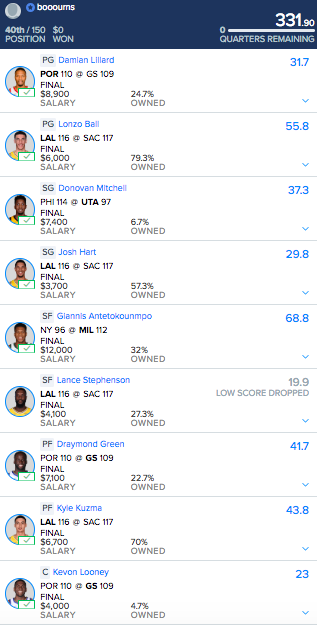 Booourns paired Giannis and Lance at SF and went all the way down to Kevon Looney at C. That gave him the extra salary to get up to Damian Lillard and Donovan Mitchel paired with the Lakers guards. 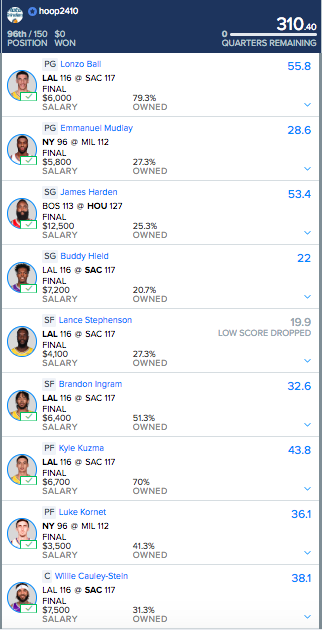 Hoop2410 did what I probably should have done to build a Harden lineup by going down to Emmanuel Mudiay and Luke Kornet in order to move up to guys like Buddy Hield, Brandon Ingram, and Willie Cauley-Stein. 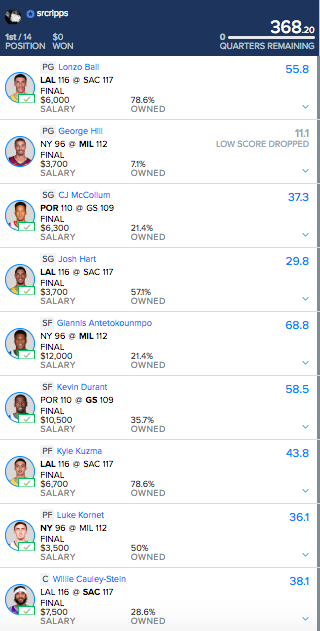 Scripps absolutely destroyed us in the AndyBowsers Slack Tournament with this lineup that took all of the best parts of JeffElJeffe’s lineup and then went a step beyond that by going down to the George Hill punt in order to free up enough salary to get up to guys like CJ McCollum and Willie Cauley-Stein.

It looked like my big takeaway was going to be that I should have gone with Luke Kornet with Kyle Kuzma at PF, but after looking at all of the expert lineups I am thinking that I was wrong to default to James Harden as my stud of the night. Obviously, the Giannis and KD lineups did much better.

What’s even more frustrating is that outside of Lance Stephenson and maybe Brook Lopez, everyone on my team performed well above expectations. So with all of that in mind, I’m going to chalk this up as a strange slate with too many options that were all reasonable choices.

Fortunately, we have a brand new 10-game slate on tap tonight that will fill our lives with new choices to make. Let’s get to work on that research and I’ll see you back here tomorrow for another edition of Fading the Chalk!