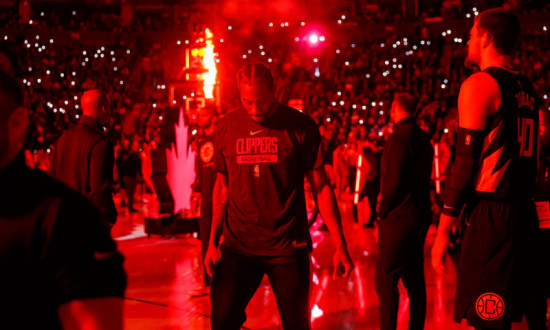 In addition to being the first slate of the new year, yesterday was also my first night back to bingo since before Thanksgiving. I wasn’t able to move around quite as much as usual, but I did help contribute to the evening, and it felt really great to be back at work.

On the other hand, I was back to missing any late news, so had there been anything major, I definitely would have missed it. But I’m used to that, and we got lucky last night.

I spent the better part of the day yesterday trying to scheme a way to fit Damian Lillard, Kawhi Leonard, and Giannis Antetokounmpo into the same lineup. But after realizing that it wasn’t going to happen, I took a hard swing and decided to fade Giannis.

The two value plays that I really liked yesterday were Maurice Harkless and Luke Kornet. After that, I also thought that Fred VanVleet, CJ McCollum, and Lou Williams were all good plays at their price points.

And when I combined all of that into one lineup, I had just enough salary to fill in my last two spots with Serge Ibaka and Willie Cauley-Stein.

That lineup was good enough to have me finish right in the middle of the pack in all of the contests that I entered, but I’m still not exactly sure if I did anything wrong. So with that in mind, let’s get to the expert lineups and check out what they did last night. 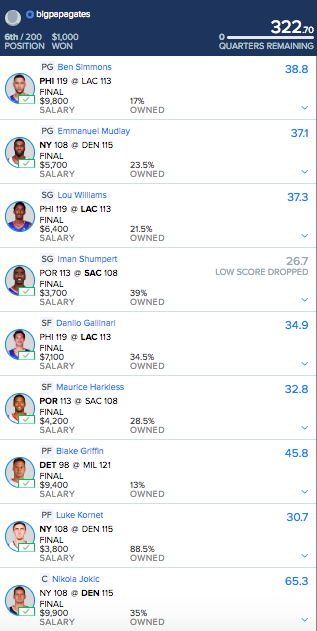 BigPapaGates took sixth in the $222 Single Entry Tournament, and he didn’t mess with any of the three studs that I tried to cram into my lineup. Instead, he rolled with Ben Simmons, Blake Griffin, and Nikola Jokic.

He did utilize my Harkless and Kornet plays, but also was in on big games from Emmanuel Mudiay and Iman Shumpert. Of course, Papa is also one of the more contrarian experts, so let’s what some other guys went with. 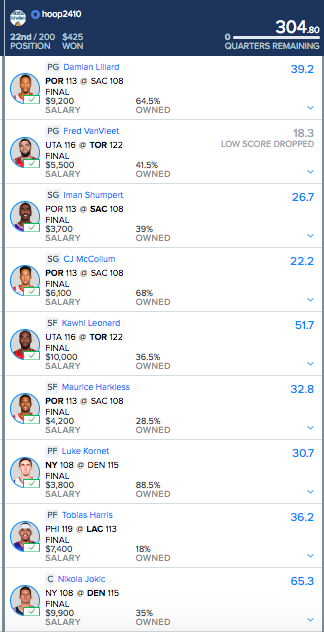 As you might have guessed, Hoop2410 was much closer to the lineup I rolled out. The big difference is that he was willing to go down to Iman Shumpert in order to get up to Nikola Jokic. And that also saved him enough salary to roll with Tobias Harris over Serge Ibaka. 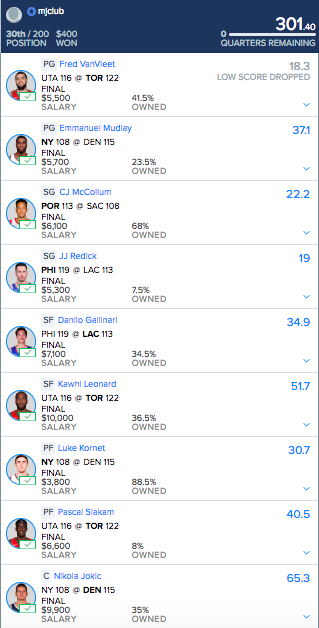 MJClub had a similar framework, but he came down off of Damian Lillard in favor of pairing Emmanuel Mudiay with Fred VanVleet. He also swapped in guys like JJ Redick, Danilo Gallinari, and Pascal Siakam, but it looks like Jokic was the key to everything last night. 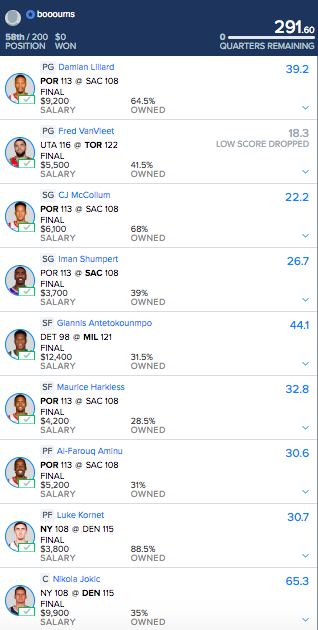 Booourns went cheaper at PF by pairing Al-Farouq Aminu with Luke Kornet, and that saved him enough salary to move up from Kawhi Leonard to Giannis Antetokounmpo. 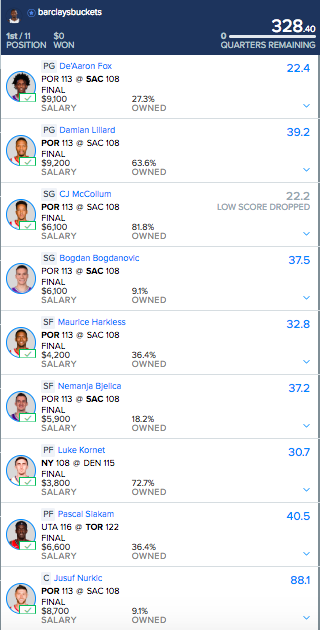 BarclaysBuckets went way off the board with Jusuf Nurkic and was handsomely rewarded with an 88 point night and the top spot in the AndyBowsers Slack Tournament. Unfortunately, his bold call on De’Aaron Fox didn’t work out quite as well, but he was still good enough to finish deep in the money in just about any tournament he entered last night.

I made a very good decision in sticking with Kawhi Leonard and avoiding Giannis Antetokounmpo last night, but I messed up by not trying to get up to Nikola Jokic. The combination of those two decisions got me halfway to the money, which is pretty much the same as finishing in last.

I feel like I keep making those kinds of errors on small slates. Fortunately, we have a nice nine-game slate to tackle tonight, and I’ve done very well on those over the past few months. Let’s dive into that research and I’ll be back tomorrow with another edition of Fading the Chalk.