Fading the Chalk: The Sunday Edition 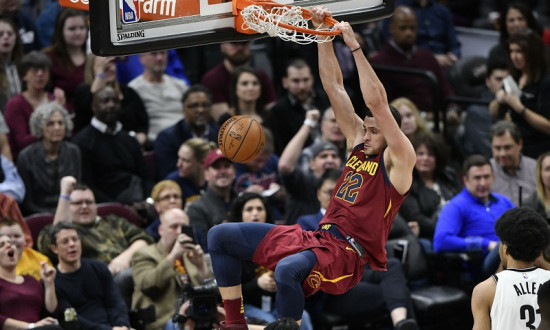 Remember yesterday morning when I made a plan to get up early today and write about NBA because I wasn’t planning on playing the NFL slate? Everything about that was wrong. Everything.

First of all, I stayed up late watching Jon Jones, because that’s what you do when you have money in your MyBookie account and there is a late-night UFC fight.

Then, after sleeping in way later than I should have, I realized that one of my friends leagues was still playing this week, so I had to put together a lineup. And if you’re going to make a lineup for one league, you might as well enter a bunch of other contests too, right?

So now I’m like 5 hours behind schedule and I’m not going to get anything else done because I’ll be glued to the NFL RedZone Channel all afternoon. My wife hates me. My clients are pissed I didn’t get yesterday’s work finished yet. And I’m probably going to spend the rest of the day eating Domino’s and watching football. Long live America.

My Lineup: The Obvious Lineup All-Stars 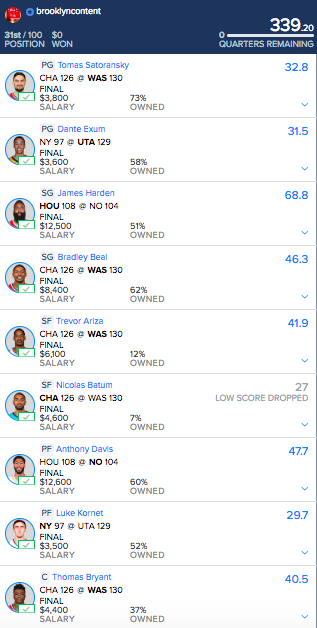 Stop me if you’ve heard this before, but I figured that the best approach last night was to use all of the great value options out there to fit James Harden and Anthony Davis into a lineup. Prob wanted to get Bradley Beal in there too. Not exactly Houston Rockets science, right?

With value plays like Tomas Satoransky and Daunte Exum up top at PG and my man Thomas Bryant doing work down at C, finding the right value plays wasn’t hard last night. And that’s before I even got to Luke Kornet.

From my perspective, the only place where you could get creative was in what you did at SF. My preference was to get Trevor Ariza in there, even though it meant stepping down to a Nicholas Batum play that I wasn’t 100% comfortable with.

But while he was the score that I dropped, Batum showed up for me anyway with a solid 27. 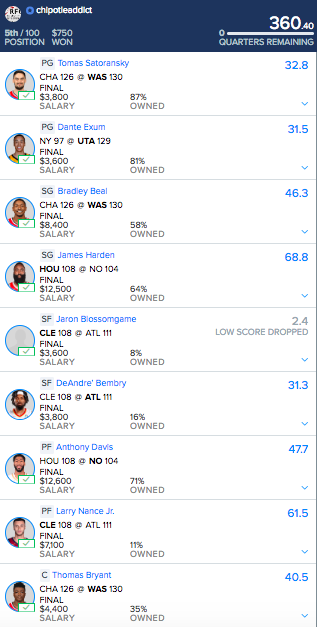 I spent the first half of the night in the very top of the $5 100-entry contest I played duking it out with this ChipotleAddict lineup that also did very well in the $222 Single Entry Tournament. It was almost identical to the one I rolled out except that he went double cheap at SF in order to squeeze in Larry Nance, Jr. That worked out well for him with DeAndre’ Bembry combining with Nance for almost 100.

The Dude JeffElJefe was right behind Chipotle with this lineup that showed that you didn’t NEED Larry Nance, Jr. to win. El Jefe also skipped Bradley Beal in favor of Alec Burks and stepped up from Tomas Satoransky all the way to Damian Lillard. 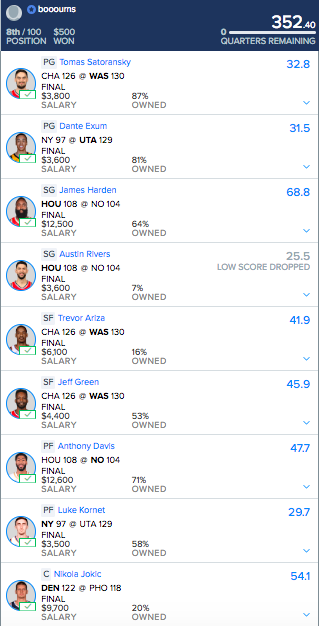 Booourns was also in the mix with this lineup that skipped Beal and Nance in favor of going cheap with Austin Rivers and Luke Kornet in order to get up to Nikola Jokic as a third stud. 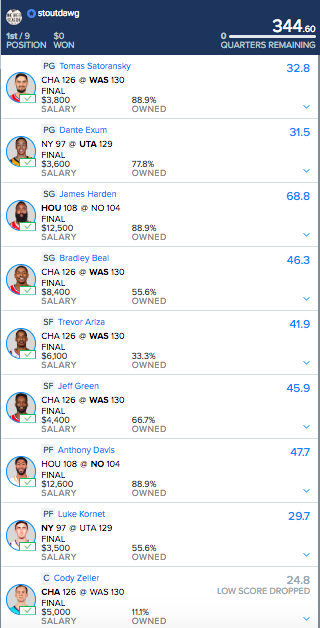 My man StoutDawg just barely edged me out in the AndyBowsers Slack Tournament. His tweak was to fit both Washington SFs into his lineup by coming off of Thomas Bryant and pivoting to Cody Zeller at C. Nicely done, buddy!

Once again, I didn’t win anything. But once again, I was right in the thick of it. But I also feel like down to Bembry and up to Nance is something that I could have considered if I was a bit more focused heading into lock.

I could use work as an excuse like I used to, but based on the fact that I’m still rocking the boot and crutches, it’s not like I was on the line cooking. I was just sitting at my desk and should have played around a bit more.

Fortunately, I have the opportunity to do exactly that with the five-game main slate on tap for tonight. Plus I might not lose all of my money on this super-random NFL slate. Either way, I’ll be back tomorrow with a recap of whichever slate makes me less angry.