July 8th Recap: What a slate this was! As for the picks, they went 3/3; Rafa dominated Sousa start to finish, though I was a little disappointed he was not the high score on the board; but still a great score nonetheless. Querrey came through again and was not broken once in the match and now through four matches has only been broken once. The Pella match was something else! Being at work not able to watch the match and just having the score constantly be refreshed was nerve-racking. At one point I believe in the fourth set Pella was broken and Raonic was serving for the match, but Pella ended up breaking right back to get on serve. The bet on the Kvitova/Konta over was an easy winner as well, putting the record for the year at 2-0 +2 units.

There were plenty of upsets on the day. Zhang, Riske, Muchova, along with the Pella upset were all fairly big upsets. As fun as the tournament has been, we are getting into our last slate of Wimbledon with the quarterfinals, and with the slate being only eight matches and 16 players I will be doing just a two-player write-up. I will give an expensive play still and do a low to mid-range play, so let’s get into it!

Novak Djokovic – $24, the most expensive player on the slate

When you get down to so few matches, things start to get harder even though your options are fewer. For this slate, I would say there are really only three players, maybe a fourth you could argue would be included in the expensive range. Between Djokovic, Nadal, Federer, and Serena, I like Djokovic the most for this slate. Djokovic has a career record against Goffin of 5-1, with Goffin winning their most recent match in 2017. Djokovic comes in as the biggest favorite odds wise at -2300, the next biggest favorite coming in at -950. 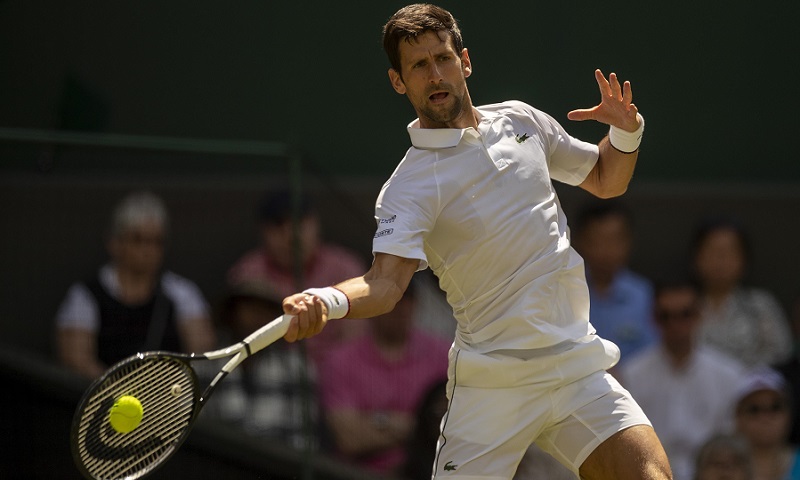 Djokovic does not have any grass stats from 2019 pre-Wimbledon to look into, but for his career he is holding serve 89% of the time on grass. This is not the elite Federer range but very impressive in itself. Djokovic has only been broken four times in four matches at Wimbledon thus far, and he did not even face a single break point against his opponent on Monday, Humbert. Goffin like Djokovic does hold serve on grass at a respectable percentage, 84% in 2019, and has been broken nine times in his four matches at Wimbledon. Goffin has never been known for his serve — it isn’t powerful and also doesn’t tend to have much movement to it. Add in Wimbledon traditionally being Goffin’s worst major (57% winning percentage coming into this year) and first time into the quarterfinals here, and Djokovic could have plenty of opportunities to break Goffin’s serve.

Speaking of breaking serve, Djokovic wins 26% of his return games on grass and has converted 40% of his break point opportunities. Again, with Goffin’s lackluster serve, I do not anticipate Djokovic having trouble putting Goffin into a lot of break of serve opportunities. Djokovic has generated 53 break points in his first four matches of the tournament. This match really is David vs. Goliath, but I anticipate a different outcome than the original.

Roberto Bautista Agut – $18, T-5th most expensive player on the slate

I have written Bautista Agut up before and I absolutely love his game on grass. He holds a career 2-0 record against Pella with his most recent win coming this year on clay. Bautista Agut is currently a -480 favorite, which is the lowest favorite of the four men’s matches Wednesday.

Bautista Agut has cruised through his first four matches of Wimbledon, winning all 12 sets he has played. The same cannot be said for Pella, who has now played two, five-set matches and one long four-set match in the first round. I do believe once you get this far into a major, fatigue really does come into play even with a day off between matches. Bautista Agut on grass has an 83% service games won percentage and a 23% return games won percentage. Pella, on the other hand, has a 79% service games won percentage and a lowly 13% return games won percentage, though this year at Wimbledon he is doing much better than his career percentage is. While Bautista Agut does give up points on his serve, he does not face a ton of break points and does well to manage each point. Bautista Agut rarely goes for it and is content playing long rallies, forcing a mistake out of his opponents most of the time. If you go back and watch the Khachanov match, this is exactly what Bautista Agut did; he would play the long rallies and Khachanov would finally make the mistake. With Pella’s fatigue a factor and just how well Bautista Agut has been playing here at Wimbledon, I think he by far the best mid-range play on the board.

Plugging in Djokovic and Bautista Agut into your lineup will give you an average of $15 to spend on your last four players.

I am going to be putting one unit on Svitolina to beat Muchova 2 sets to 1 at +240. Muchova should be tired after the last match, but Svitolina isn’t necessarily the greatest grass court player. This match of the eight has the least fantasy appeal to me.