As most sporting fans across the nation are looking at their brackets, picking which 12 is going to beat that 5 and circling Kentucky to dance all the way to a national title, the PGA is finishing off its final leg of the Florida swing. In DFS PGA, there is no elite eight, or final four. Instead we strive for that spectacular six that helps us cash in all our leagues. So while the NCAA might have their March Madness, we can all agree that in the DFS world every month is madness all you have to do is pick your poison.

Speaking of madness, what a ending to a tournament. A three-way playoff between two of the brightest upcoming stars in the game and veteran golfer trying to write a remarkable comeback story. I had Spieth on one team and Reed on another, but I found myself rooting for O’Hair. Spieth and Reed will be around for many years; O’Hair on the other hand was playing through a sponsors exemption and the former 12th ranked player in the world almost pulled off a surprising win to earn his two year exemption. In the end it was Jordan Spieth who earned his second PGA Tour win and his third win worldwide in recent months (Australian Open and Hero World Challenge). 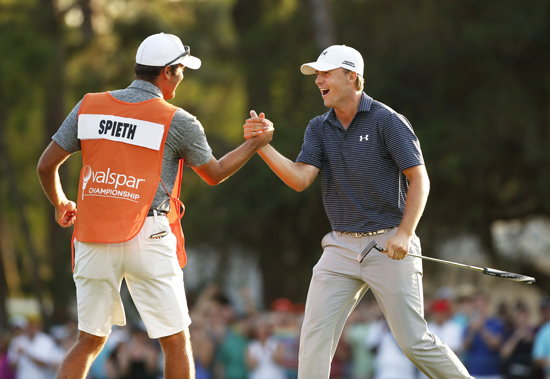 As for the fantasy aspect of last week my picks did okay. Henrik finished forth again, Todd performed well, Furyk made the cut but under performed. Byrd, despite his hole in one couldn’t find a way to make the cut. Choi disappeared and the only way to comment about Charley Hoffman is by this clip from the late Heath Ledger

One fun thing that happened last week was a challenge posed to me on Twitter. The challenge was to create a team that would cash with the condition that I had to use the winner of the reality golf show Big Break, Jimmy Brandt. As a prize for winning that show he was exempt into the Valspar. It turns out my Jimmy Brandt team was the highest scoring lineup I put together. The other five players were Jordan Spieth, Henrik Stenson, Jim Furyk, Brendon Todd and Brian Davis. Placing 391st out of almost 19.5K. For me it generated the most fun and in the end that is why we play, right?

Whenever you have a name like Arnold Palmer hosting an event, the top players will flock to it. With Rory making his debut at this tournament we have the top five ranked players in the world teeing it up. The field is reduced to 120 players; a usual PGA event has 156. The same cut rule applies. The fantasy relevance for this is you might find fantasy owners having a greater percentage of players make the cut. If you only have four players make the cut then you could be in risk of not cashing in 50/50’s or even H2H’s.

The Arnold Palmer is played at the Bay Hill Club & Lodge in Orlando Florida. The course runs 7,419 yards long and is a Par 72 track. There are 103 bunkers on the course with water in play on 9 holes. It has average size greens and the rough is around the four inch mark.

There you have it folks, my plays for the Arnold Palmer Invitational.

Good luck to everybody!