So with 12 events in the books and the last of the specialty events we can now get down to business with the real part of the PGA season. Of course there still is the match play event but unless some sites decide to try something special for that event there is no fantasy relevance to it.

Well all I have to say is thank God that event is over. I am not just saying that because my teams and picks were average, it just wasn’t very interesting to watch from a fantasy perspective. I mean, take the staple of fantasy PGA, Shot Tracker. Since Pebble Beach is played on three courses you could only track your players one course each day, plus those who made it to Sunday. Well that’s okay, I will just flip it over to the golf channel to watch it. Oh wait that’s right, lets just show Peyton Manning and company all day. I guess it might be good for the casual fans but I wasn’t interested in seeing the celebs signing things. Finally when the real golf started (Sunday), Jimmy Walker was so far a ahead I could not justify sitting around watching it. Decided on shoveling snow into a massive ramp for the kids and took them to see the new Lego movie instead. Congrats to Stlcards for a great team as well as Notorious in picking the winner in his article. Rotogrinders is on a two week roll in picking the winner. Lets see if we can go for 3 weeks in a row. 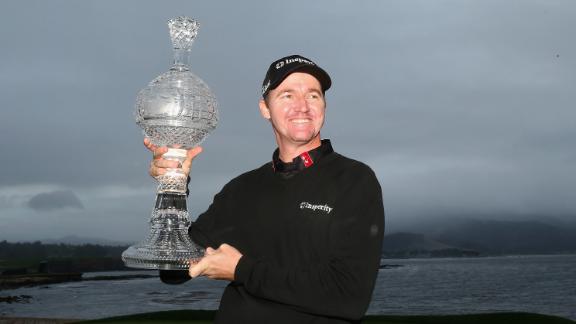 This week the PGA travels south to Los Angeles, home of the Riviera Country Club. Just a stone throw from Beverly Hills. The course is a par 71 track that runs 7,349 yards long and the best thing is that this tourney is played on the same course the entire time.

John Merrick is the defending champ, who used his course knowledge as a UCLA Bruin to come from 3 strokes back on the final day to be the 1st LA native to win the Northern Trust. It will be tough for Merrick to repeat though. The world match play event is next week and most of the top talent in the world has come in early and are competing this week.

According to weather.com the forecast for this weekends event should be ideal. Weather Report

So there you have it folks, my Northern Trust picks.

Good luck to all and look out for my Masters articles coming soon.