We are reaching the halfway point in the PGA season. Hitting our second major of the year (though its not an official major). Here are my Draftkings picks this week for THE PLAYERS championship.

Well wasn’t that an interesting little tournament. In a field regarded as “weak”, it certainly took some strong contenders out, including my two top picks from last week—Lee Westwood and Jimmy Walker. Westwood stunned me. I am lost for words on what happened to him. At one point he was coming tied tenth during the second round, only to implode dropping all the way to 100th. The type of stuff that makes you just scratch your head.

Jimmy Walker was a big disappointment as well. I figured he would have a much better showing than he did but he never got into a groove. One player that doubled Walker’s score but went 11K cheaper was Bronson La’Cassie. Now Bronson was doing very well until Saturday, then he bombed the whole weekend to finish near the bottom of the weekend leaderboard. For 8K though he filled his role, but when he is your 4th best player on your team you are in trouble. I also said Blixt could be a nice sneaky play. Turns out he wanted to hide this week.

In the end, the only players that did me well were Pat Perez and Gary Woodland. I think if they want to keep Woodland’s price down I will continue to ride him in that mid value range. I really believe Greg Norman has worked wonders with him. 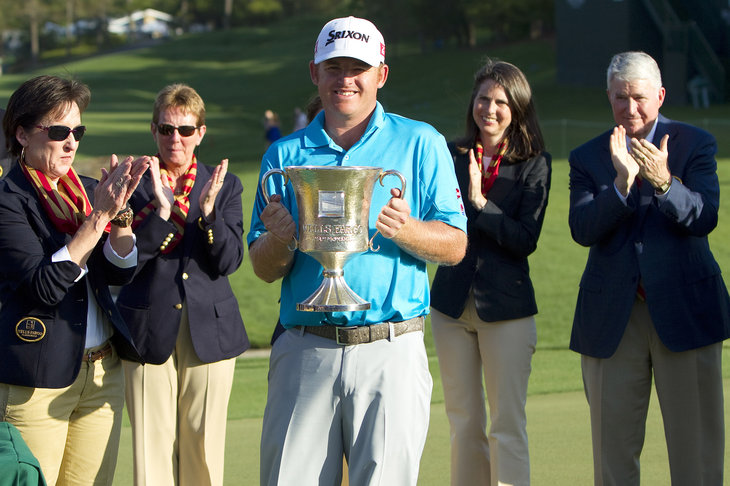 The eventual winner of this tournament was J.B. Holmes. Such a great story coming back from brain surgery. When watching the ending they panned to Furyk (coming in second) and I really believe from the look on Jimmy’s face he wanted JB to finish it off for the win. Just like all sports, there are some really great stories in the PGA that don’t revolve around Tiger Woods. Though I wish David Feherty would not have cracked a “losing brain cells joke” at the end. Sort of lacked class. None the less a big congrats to JB.

As stated above this is a non-major with major feel to it. Not only does it offer a large purse, the winner receives the following: An automatic five year Tour card, three year invite to The Masters, three year invite to the US and British Opens and an automatic entry into the PGA Championship later this year. So as you can see there is a lot on the line for these players.

The course was designed by Peter Dye in a way to test every aspect of the golf game. No two back-to-back holes go in the same direction. There are doglegs left and right. There are short holes and long holes for every PAR. Not to mention its signature 17th “Island” hole.

One issue the PGA is facing is that some of the greens (in-particular holes 4, 11 and 12) have remained closed due to weather conditions and “application error”. You know someone is getting fired over an “application error” before one of the biggest golf tournaments in the world. I’m not sure how this will effect players though. I could see some strong putters who make their living on the greens be mentally disturbed by greens that may not be 100%.

As I mentioned on GrindersLive last night I would link a PGATour.com article that gives you a hole by hole walkthrough from the players themselves. An interesting read. Click the link

As stated before, these are my picks for Draftkings. I really tried to narrow it down to players that will give you a solid chance to contend as well as picks to give you maximum roster flexibility. Justin said it perfectly last night. “Anybody can come out and recommend the Matt Kuchar’s of the world”.

So there you have it. Picks that you might not have thought about for this weeks PLAYERS Championship.