As a good percentage of sports fans around the nation collectively mourn the loss of their brackets, the PGA swings from Florida to Texas for a Texas Two-Step towards Augusta. With the Masters right around the corner and the Millionaire Maker prices out, owners are keeping an eye on some cheaper players already. I have to admit, it puts a different dynamic on the way you attack your Masters research.

Editor’s Note: This article is a free preview, and will soon be a part of our DraftKings PGA Incentives. Check out the official announcement on our forums for all the details about this new offering.

At one stage on Saturday I thought I might have written my best ever article when Stenson, Kokrak and English were all tied for second place, just one stroke behind Morgan Hoffmann. Vijay did what I expected him to do, make the cut and hang around the 60’s mark. A nice security blanket to keep the scoreboard ticking over.

As I said before the Valspar event, Stenson goes on spurts of top-10 and top-5 finishes. With Bubba Watson withdrawing prior to the tournament starting, a lot of players jumped off Bubba and onto Stenson. Stenson’s faltering at the end led to the ninth consecutive event where the leader after round three has failed to close the deal. His poor play down the stretch really cost a lot of owners.

In the end, it was Matt Every who became the third person this season to successfully defend his championship. As of Monday morning, Every has not been added to the Millionaire Maker and I’m not sure how that works either. None the less, Every will be now heading back to Augusta. 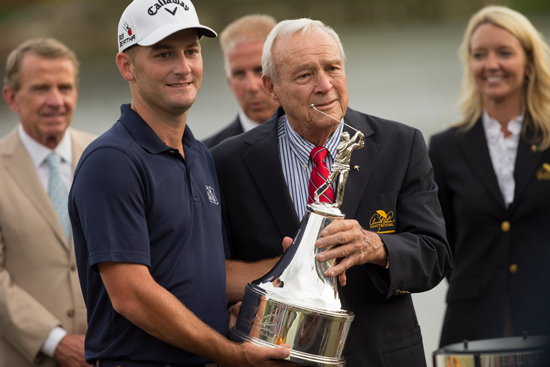 We head from an event hosted by one of the oldest icons in pro golf, to an event that is one of the oldest running events on the PGA Tour, the Texas Open. PGA players will be sinking their teeth into a course designed by The Shark, Greg Norman with Sergio Garcia as the consulting pro for the project. This course, the TPC San Antonio, has been the home of the Texas Open since 2010.

An interesting stat I was looking at was the relation between Australian golfers and this course. As most would know, Greg Norman is an icon in Australian sport. He had the rare chance to bring a piece of Australia to the US in terms of course design. I feel this has benefitted Australian players at this tournament. Two of the five champions at this course have been from Down Under and the Australians within this field are 14 cuts made in 18 starts. Subtract Robert Allenby and that stat goes to 14 cuts made in 16 starts. Allenby must be a fan of the Copa Wine Bar, just 20 minutes away.

The course itself is 7,435 yards long and plays to a par 72. It is protected by 50 odd bunkers and has three water hazards. The greens are Bermuda grass, as is the rough. Considering the five champions that have come from this course, only Ben Curtis can be considered an above average putter. For the stats guys, I would weigh the Strokes Gained: Tee to Green stats over Stokes Gained Putting.

So there you have it folks, my picks for the Valero Texas Open.