Hello Grinders. Something that I’ve been wanting to do more of is to review my cash game lineup from the night before. My goal for this is twofold: one is for me to continue studying and learning from my mistakes, and two is that I hope anyone reading this can benefit from it.

Let me preface by saying I’ve typically been a GPP player, but I decided to try something completely different for 2019. Instead of focusing on GPPs, I wondered what would happen if I started grinding cash games, specifically double ups. My thinking was simple: GPPs have a ton of swings and require you to have a top 1% outcome to really profit. Instead of banking on a top 1% outcome, what if I played double ups where I just needed to be among the top 44% in order to double my money? I specifically focused on the single entry double ups so I’m not competing against 150 lineups from someone else. This evens the playing field.

Let me state the obvious: grinding cash games isn’t sexy. There is no glory in winning cash games. There is no #screenshotlife. But I surprisingly have found myself really enjoying this shift to cash. I’ve basically traded in the hope of a huge payday for more consistent (smaller) winnings. I still love GPPs, but it’s been emotionally easier to handle single entry double ups where I basically have to beat a little more than half the field on a given night. I’ve also found my background playing GPPs has come in handy, because I can jam in the chalk in cash games but I’ve built up the tolerance to play a bit more risky than a normal cash game player when I’m chasing the ceiling. Cash games are so sharp and tough now that I really do think you need to aim for ceiling plays in some cases to differentiate yourself and push you to the top half of a double up.

Feel free to reach out to me on Twitter here. Let’s dive in!

It was an ugly night on Wednesday and the cash line was extremely low (230.75). This single entry double up paid out the top 800 of 1,839 entries. I was able to finish in the green in 175th place. My lineup consisted of: D.J. Augustin, Avery Bradley, Allen Crabbe, Jerami Grant, Nikola Vucevic, Russell Westbrook, Jonathan Isaac and Chris Paul.

I followed Meansy’s core plays of Chris Paul, Nikola Vucevic and Jerami Grant. On a slate with no value, I agreed Grant was a building block. We didn’t get news before lock on whether Markieff Morris was out due to his neck injury but given his history of neck problems, I assumed they would play it safe with him. Morris’ absence would allow Grant to play even more minutes.

I also agreed Chris Paul was a core play because his $6,900 price tag was too cheap for someone of his caliber. He’s been slumping lately due to poor shooting, and his price has been dropping. Paul was an easy way to get exposure to the Rockets and their 116 implied team total, second highest on this slate.

Lastly, I agreed Nikola Vucevic was a core play. The matchup against the Wizards was an elite one on paper. I would’ve liked Vuc even more if Aaron Gordon didn’t play (he ended up playing), but at $9,200 I had no problem paying up at center. I noticed many lineups paid down at center using Jarrett Allen at $4,700, which completely made sense, but I didn’t love the matchup against Steven Adams, who I consider an elite defender.

It’s worth noting that the ownership on Grant was 52%, 62% for Vucevic and 63% for Paul. In other words, the masses agreed they were good cash game plays as well.

Here’s my thought process on the rest of my lineup that I was sure of:

D.J. Augustin – Isaiah Briscoe is done for the year, meaning Jerian Grant is now backing up Augustin. That’s one less body on the Magic for Augustin to contend with. Additionally, opposing point guards against the Wizards has been a position we’ve targeted all season. At $4,300, I wasn’t passing up on Augustin.

Avery Bradley – If you follow me on Twitter, you’ll know I’ve been screaming we need to just play guards against the Hawks. It’s a fantasy goldmine. Sadly, Bradley busted big time here and finished with 6.75 DKFPs. The good news is he was 57% owned, so I wasn’t alone. Ideally I would have played Mike Conley, but I didn’t have the salary and I needed to play someone at the SG position. Bradley felt like the best fit to me (outside of Klay Thompson, which I’ll touch on later). In the end, it turned out to be a C.J. Miles game, and he was the real winner of this matchup against the Hawks. No regrets here despite the poor performance.

Allen Crabbe – Crabbe was coming off a 36 DKFP performance and the team was without DeMarre Carroll, so I thought Crabbe’s role was pretty secure. I know Crabbe is a volatile player but I thought his upside was good enough here. This was my biggest mistake of the night. In retrospect, I probably should have played Andre Iguodala here, who ended up starting for the injured Kevin Durant. Iguodala finished with 15.75 DKFPs and cost the same as Crabbe ($4,000), so I missed out on 3.5 DKFPs. I still believe Crabbe’s ceiling was higher but Iguodala was 40% owned in this double up compared to 13.5% for Crabbe, so the industry definitely gravitated towards Iggy. I live in the Bay Area so I’ve had the benefit of watching Iguodala for years now, and he’s just not someone the team prioritizes on offense as he’s never looking for his own shot. Since he makes his living on defensive stats, I didn’t think he’d see a major boost even with Durant out.

I’ve typically found that my cash game lineup will come down to me struggling on a 2v2. I had a guard and forward spot open, and debated whether to play Russell Westbrook / Jonathan Isaac or Bradley Beal / Draymond Green. I wanted to play the second pair because getting Green would allow me to get exposure to the Warriors, which I’ve faded thus far on my cash game lineup. Beal has also been rock solid lately. I could’ve also done some combination of Curry + another forward or Klay + another forward, but none of the other forwards at those price ranges were appealing. I really wanted exposure to Golden State but couldn’t find anything I loved.

On the other hand, Westbrook has typically crushed matchups against D’Angelo Russell and I felt he had the highest ceiling of any player on this slate. Counting last night’s game, Westbrook has now scored at least 71 DKFPs in four of his last five matchups against Russell. I didn’t necessarily expect 70+ fantasy points again, but I figured the upside was there, and on a slate with no good value, I thought it was worth playing Westbrook for the raw points alone (photo credit: Statmuse). 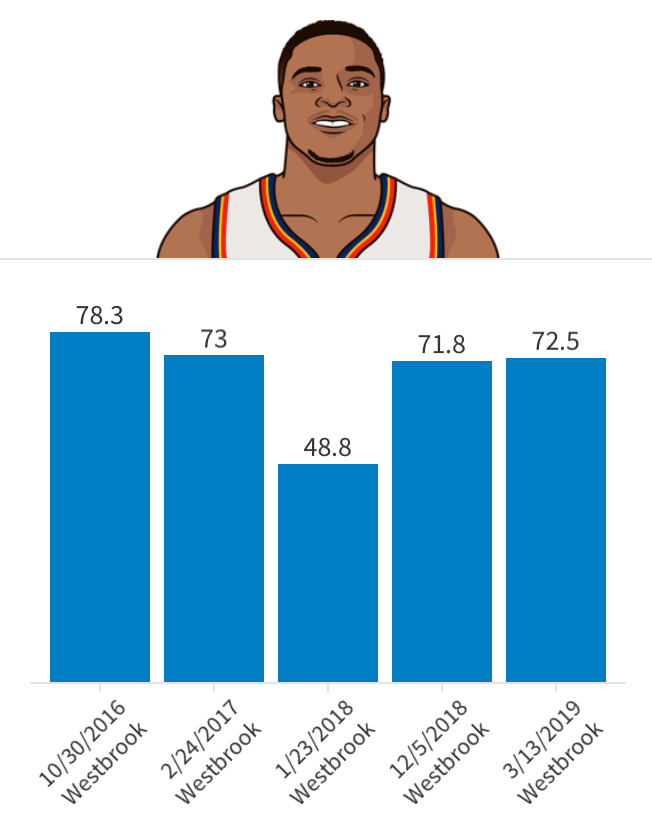 I didn’t love Jonathan Isaac with Aaron Gordon playing, but he was $5,000 and putting him in my last spot would use up all $50,000 of my salary. None of the forwards priced below him were appealing and I figured the matchup against a poor Wizards defense was at least good enough. So in the end, I was hoping Westbrook + Isaac could outscore Beal + Draymond. Westbrook + Isaac finished with 100.25 DKFPs while the Beal + Draymond pairing finished with 63.25 DKFPs, so that difference pretty much decided my night.

Let me point out the obvious that maybe it was dumb of me to fade the Warriors completely on a night they didn’t have Durant. DeMarcus Cousins finished with 50 DKFPs, Klay Thompson finished with 43 DKFPs and Stephen Curry finished with 41.5 DKFPs. In GPPs I would’ve found ways to jam them in. I think in retrospect I probably should’ve found a way to play one of the big three, mainly Klay. I didn’t want to do a complete fade of the Warriors, but my roster construction led me another way.

I got lucky with my Westbrook/Isaac 2v2, as I could’ve easily went Beal/Draymond and that would’ve been game over for me. I also got lucky that my decision to play Crabbe over the chalky Iguodala didn’t come back to haunt me. I still believe it was a viable route, but I probably should’ve been more open to Iggy at the same price tag.

I completely missed the boat on C.J. Miles, as he wasn’t even on my radar. He was dirt cheap but it feels like an outlier game that forced the Grizzlies to use him over Bradley. Despite Bradley and Crabbe posting duds, I was able to overcome it.

Lastly, I ignored the Jazz/Suns and Pistons/Heat game. With Ricky Rubio, Dante Exum and Raul Neto all back, that made plays like Donovan Mitchell and Royce O’Neale unappealing. I also didn’t want to play anyone on the Suns side against a good Jazz defense, even a somewhat cheap DeAndre Ayton. As for the Pistons/Heat game, once we got word that Josh Richardson was playing, that took me off the Heat completely. The whole game environment wasn’t very exciting.

Thanks for reading, and good luck tonight. May variance be on your side.