Hello Grinders. I hope you are all staying safe and healthy. It’s been exactly two months since I wrote my last article on RotoGrinders. Goodness, it feels like yesterday that Rudy Gobert was rubbing himself all over Donovan Mitchell and the Utah press microphones. From a content perspective, a part of me has missed writing but it’s also been refreshing to be able to solely focus on playing DFS and attend to other aspects of my life (like my family).

Like many of you, I’ve been grinding the KBO League (aka Korea Baseball Championship) to scratch my baseball itch. There’s been a huge learning curve trying to get to know hundreds of new players. But I thought I’d list my observations from Week 1 with a key point at the end from a DFS standpoint, because after all, we are watching and playing this for DFS purposes. Granted, we have just one week of data under our belt and by no means do I consider myself an expert, but these are some observations I’ve made that caught my attention and that I will be monitoring closely moving forward. Let’s dive in!

Observation #1 – The MLBers Are Dominating 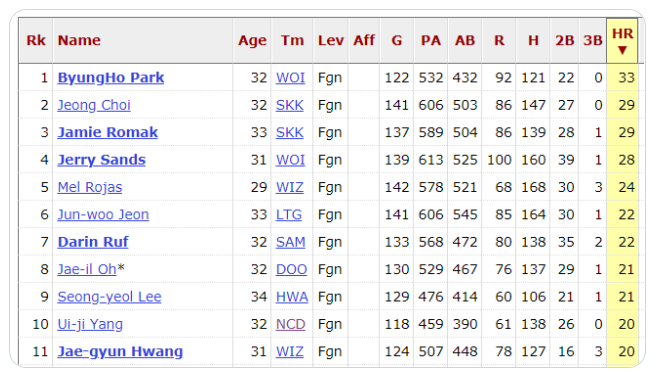 Based on the data from 2019 where 6 of the top 11 home run hitters were former MLB players (ByungHo Park, Jamie Romak, Jerry Sands, Mel Rojas, Darin Ruf, Jae-gyun Hwang), it shouldn’t come as any surprise that former MLBers are continuing to have success once again early in 2020. Preston Tucker and Dixon Machado are tied for the league lead in homers with three apiece. Tyler Saladino was already moved into the cleanup spot for Sunday’s game. And Aaron Altherr nearly had three dingers in his first two games.

But perhaps the most surprising performance so far has been the rise of Dan Straily. Yes, this is the same Dan Straily who owned a 4.2 HR/9 ratio last year in 47.2 innings for the Orioles before getting run out of town. Straily is coming off an 11-strikeout performance where he looked completely dominant. If you want to see all 11 of his punch outs, check out the clip here. The batters look completely baffled, and Straily was using a combination of going high/low as well as off-speed/fastball pitches to keep the hitters guessing. I remember in Discord people were completely writing off Straily even before his first pitch in the KBO, but if he keeps this up, he may very well be the highest priced pitcher in the KBO in a few weeks.

Former minor league pitcher (and former KBO pitcher) Deck McGuire was fielding some questions this week so I asked him if there were certain pitch types that fared better in the KBO than it did in the states. I think there was a typo in his response where he said sinners have more success in the KBO, and I agree we are all sinners, but I also think he meant sinkers. Looking at Baseball Savant, they list Straily as a mainly four-seam (52%), changeup (24%), slider (20%) and curveball (3%) pitcher. If I can find Straily’s KBO pitch type breakdown I’d be curious if that ratio of slider to non-slider has changed given McGuire’s observation, but if it’s true, then perhaps Straily can continue his success in the KBO as he’d be less reliant on his fastball and more on his off-speed stuff.

We had our first rain out this past week, but things are trickier. For starters, we don’t have a Kevin Roth in South Korea right now, so we were all relying on Kevin’s work here in the states and Twitter for the latest news. We ended up getting news of all three PPDs 15-30 minutes before lock, which wasn’t a ton of time, but it gave us something to work with before lineups locked. No, it’s still not an ideal situation, but it was much better than the move the Washington Nationals tended to do of letting their fans into the stadium for several hours and then PPD’ing the game after lock.

There’s a really good Twitter thread here by user @Jeeho_1 detailing the weather situation in the KBO. Basically, the KBO will make up games on their Monday off day or as double-headers. The KBO also cut their All-Star weekend to fit in the whole season, but there won’t be any double-headers during the Summer months of July and August.

From a DFS perspective, it’s noteworthy that only the Kiwoom Heroes have a dome. They were on the schedule when this chaos happened this past week, and if you really wanted to, you could build nothing but Kiwoom stacks knowing they were for sure going to play. I personally went heavy on Kiwoom given the uncertainty of the weather and uncertainty of how the KBO handles rain outs, and it worked out.

DFS Point #2 – The KBO only has one dome (Kiwoom) and given the lack of reliable weather information, weather is going to be even more of a headache in this league.

Observation #3 – The Hours Are Rough

From a US perspective, having lineups lock at 1am PST or 2:30am PST can be challenging, especially when we haven’t been getting consistent starting lineups this past week. The large number of names with similarities is also causing some confusion.

On opening night, I pulled ownership on the DraftKings main contest. Despite there only being 100 starters on a given night (10 teams x 9 hitters x 10 starting pitchers), there were 283 different players rostered. In other words, there were 183 non-starters that were rostered. The next night, I did the same exercise and found there were 214 different players rostered. An improvement over the 283, but that still means 114 non-starters were rostered, which made up 8.5% of ownership. It was a sign that people weren’t around during lock to confirm their players were starting and that the names of these players may be causing some confusion.

Now flash forward a few nights to the slate where everything got rained out. Starting pitcher Yong Chan Lee was 51% owned and in a PPD game. Mel Rojas Jr. cost $5,400 but was also in a PPD game and was 21% owned. My guess is that as we continue to go deeper in the season, more casuals are not going to want to deal with these headaches and sharper players will remain in our contests.

DFS Point #3 – The hours are tough from a US-perspective, but there is still some edge being around 30 minutes before lock to ensure you have players who are starting and not in any rain-impacted games. If you’re willing to put in the work and effort to be around during lock, it will help you avoid some of these landmines.

Observation #4 – Are We Back To The Juiced Era?

The KBO de-juiced their baseballs in 2019, which is why power numbers saw a big drop last year. Teams averaged 0.7 home runs per game last year, half the 1.39 home runs per game averaged in the MLB. Through the first week, however, we’ve already seen 44 homers in 44 games. I realize that could very well be variance and 1 homer per game on average is still not a huge jump from the 0.7 average, but teams are also averaging half a run more. I have no idea if the KBO would even consider re-juicing their baseballs to pique more interest as they know all eyes are on them right now as the only game in town, but it will be interesting to see if these power trends continue upward.

DFS Point #4 – The long ball may be more in-play here than we initially thought, which is going to make me want to roster some of these power hitters even more if the juice is back.