The leaves are starting to fall, the temperature is starting to drop, and I nearly forgot to shut off my sprinkler system before things froze (as usual), so NBA must be right around the corner! As usual, I took my self-induced break for MLB, but this year’s NFL has proven to be a slippery slope for me (as usual), and let’s not talk about my season-long auction team that involved me losing my Wifi for 30 seconds and having the computer autodraft Larry Fitzgerald for $35. So yeah, I’m sure you can imagine how that league is going. In other words, I am ready for some NBA!

For those of you who are new, I have done season-long NBA Challenges the past six years, with varying degrees of results:

However, what made last year different was that, for the first time ever, I managed to (mostly) balance DFS with my social life on a much higher level by playing only in later, smaller slates. You see, when I first started these challenges seven years ago, I wasn’t even married. Now, I’m married, have two cats and a dog, a new mortgage, and, oh yeah, two sons, so I don’t quite have the freedom to spend hours upon hours both researching NBA and grinding out sweats until 12:30 am every day. In fact, last year made me realize that, quite simply for the sake of my family and marriage, I could not do that. So, switching to late slates made all the difference in the world, and was basically the motivation behind this year’s blog.

So, it’s time to mix things up a bit as we enter the seventh year of the blog. This year, there will be no specific “challenge” to achieve from a monetary perspective. No, the challenge is much broader this year, as this year’s “challenge” is to do everything in my power to make sure I maintain the balance between DFS and the rest of my life. Gone will be the daily journal-style entry for each week with the balance tracking, replaced by summaries of the highs and lows of the week, as well as highs and lows of maintaining the balance with my personal life and DFS. When I play, I’ll stick with the later slates again, because there’s no reason to walk away from a format that was successful both from a personal and financial standpoint last season. However, I am also going to branch out my play to include more DS and Yahoo rather than strictly focusing on FD. Speaking of FD, I’m still a little bit on the fence as to what this new change of dropping the lowest score will mean for me and my bankroll. On the one hand, I have a few ideas on how I can manage it, as I think it potentially can be exploited depending on how the salaries and position scarcity line up on certain nights. I would like to believe it will be beneficial. On the other hand, it could potentially lead to a lot of chaos on smaller slates, because now you may just be playing 8-on-8 each night instead of 9-on-9, and we all know how many ties we had in place before they knocked a position out (I’m also curious to see how it’s going to look with live-scoring and how many scoring goofs there will be early, but I digress). Only time will tell, and I’m excited to adapt my play accordingly. I also see that DS brought back the late swap, too…. I guess we can’t say the sites aren’t listening anymore, at least! I’ll be perfectly honest, though; as someone who has rarely been burned by late scratches throughout the years (and, more importantly, has benefited from them more often than not), I’m not super excited for these two changes to be coming into effect this season. However, I do get that I’m probably in the minority here, so I understand. I am also glad more people will have a chance to be successful (or at least less frustrated) because the more new people who are able to stay alive in this game, the better!

So, that’s about it! With the season starting just a few short days away, I’ll be back here next weekend with hopefully some good news, and I’m looking forward to taking this new journey with all of you, as these were the kind of blogs I used to write back in the day when I first joined Rotogrinders a few hundred blog entries ago. In an odd coincidence, this week also just so happens to coincide with my two boys starting at a new daycare, so, with these two goobers, I’m sure I’ll already have some stories to tell about how that transition goes. Seamlessly, I’m sure…. I mean, how could anything possibly go wrong with these two goons? 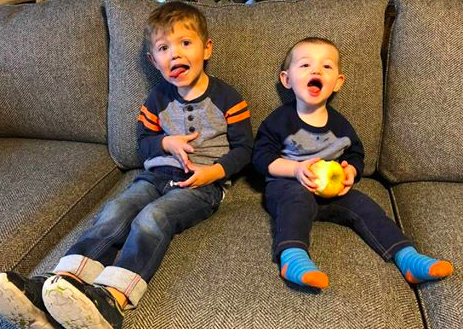 (PS: my youngest son does have curly hair, but my wife decided to give him a trim and he basically looked like Jim Carrey in Dumb & Dumber, so we cleaned the slate and decided to start over)

Here’s to hoping we all get to spend some time at the top of the NBA leaderboards, and see you here next weekend!