We have a nine-game slate to dive into today. And finally, we have some incredible matchups to pick from. We have plenty of matchups and studs to choose from; this will spread out ownership across the board. This is a good thing for tournaments, because we know we will be picking the best and right spots. 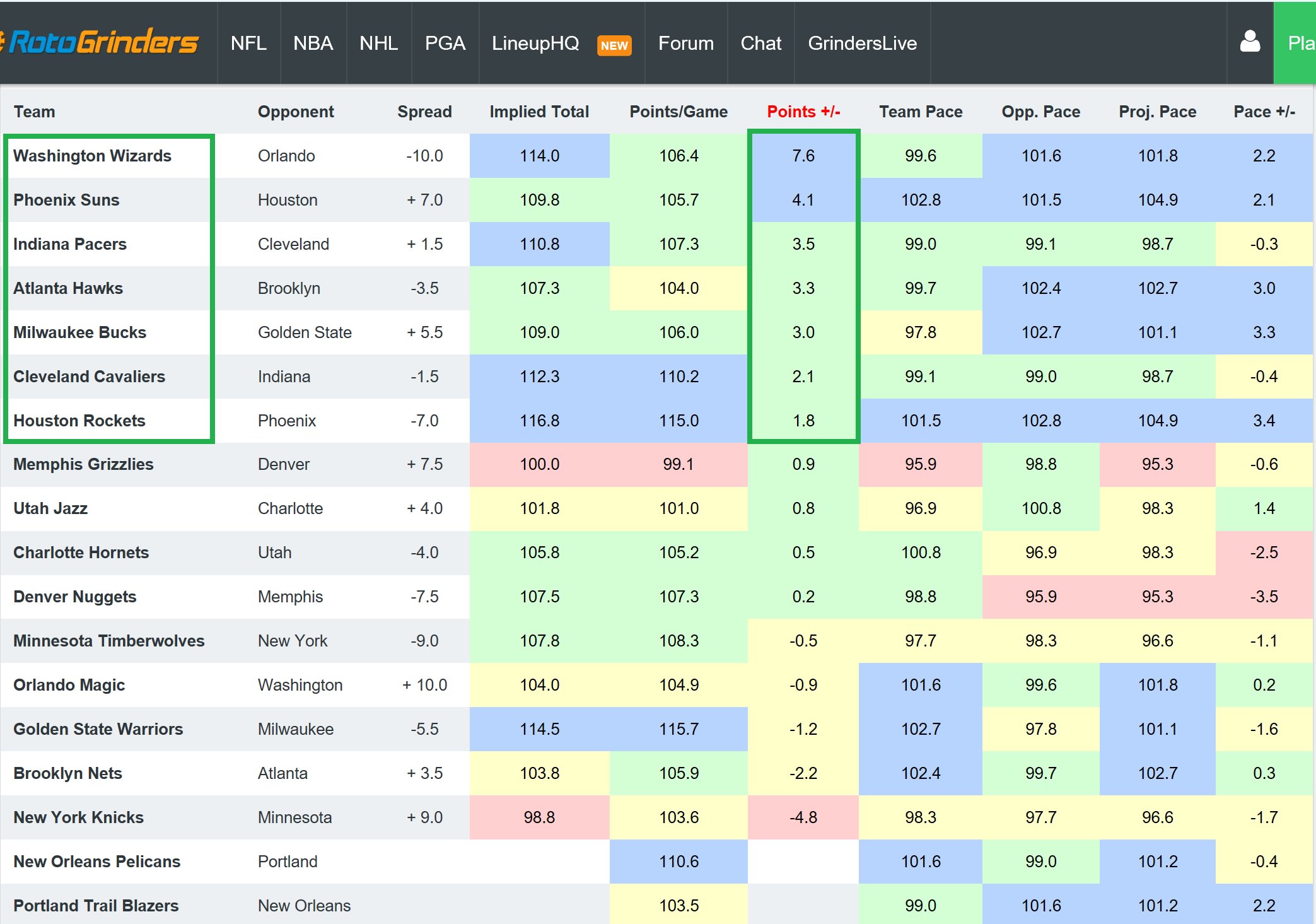 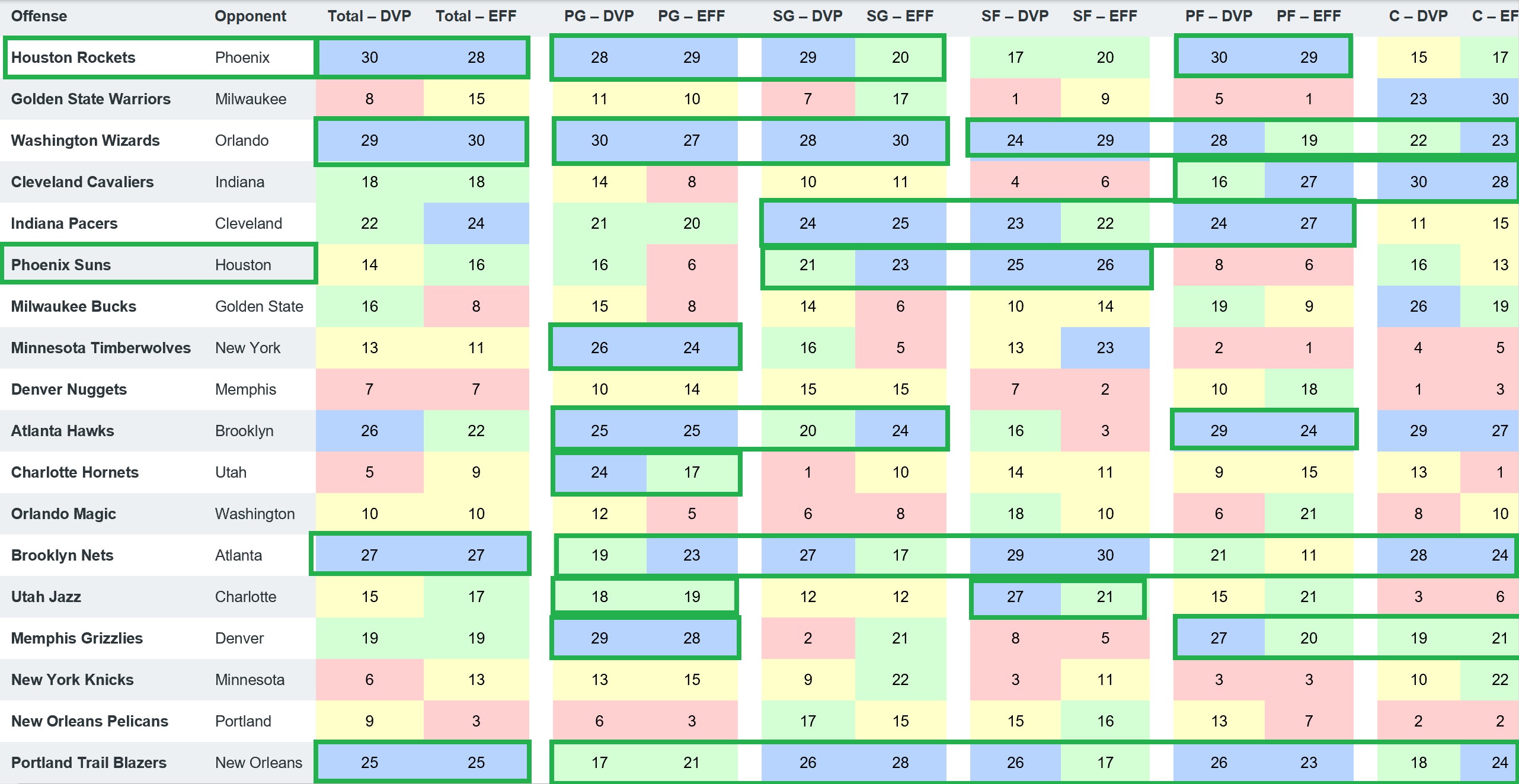 Cavaliers AT Pacers; Cav’s on a B2B, IT2 OUT & Myles Turner is OUT. Close spread and massive total. With Turner out, Oladipo is going to soak up the most minutes (38 last game), followed by Bogdanovic, Sabonis, Thad, Collison, and then Lance Stephenson (almost 25minutes last game). We can attack the Cav’s in anyway, so I would put more of an emphasis on minutes and usage.

Elite (Cash/gpp); LeBron James, 11,500 on DK – Great spot for Bron to take over and put up a huge game. With many studs on tonights slate, I see this as a cash/small tourney type of play.
GPP target; Victor Oladipo, 9,000 on DK – Dipo is priced up at that stud level. He’s not a stud we typically think about targeting, but carries massive upside in this matchup. Love Dipo for GPPs.
GPP target; Kevin Love, 7,900 on DK. We can attack Indy at the C spot and Love’s matchup against Sabonis is one he should easily take advantage of. If I don’t go Bron, I really like going with Love in GPPs.
Value target; Bojan Bogdanovic, 4,200 on DK
Value GPP; Darren Collison, 4,900 on DK… Under 5k and has 40-50pt upside if he is on his game. 4,900 is just too cheap.

Sabonis, Thad, etc, you can make a solid case for many of these players. This is a great spot for fantasy production

Magic AT Wizards; Usual suspects out for ORL. High total but the wizards are heavy favorites. Wall & Beal are each sporting massive usage rates of 30%, and they are playing massive minutes (Wall 42 & Beal 39 vs the Jazz). And, they really aren’t blowing teams out. But, Orlando has been so bad recently. The only way I see this game staying close is if the Wizards come out flat.

GPP; Otto Porter, 6,000 on DK; remember this guy? I know it’s been the Beal and Wall show, but Otto is very capable of having a blowup spot in this game.

GPP; Evan Fournier, 5,500 on DK; Price is way too low and he looked very good in his last game.

Jazz AT Hornets; Favors & Hood are listed as probable. (Pricing here is interesting) The pricing alone makes Kemba and Howard in play. My preferred target would be Kemba against Rubio.

GPP Value; DeMarre Carroll, 4,700 on DK, if he plays and no mins restriction announced

Blazers AT Pelicans; Lillard is probable and Brow is questionable. Portland does a great job at limiting fantasy production. Since we have many games to pick from tonight AND if Brow is IN; my preferred target in this game is on the Blazers side.

Elite GPP – Damian Lillard, 8,600 – he’s tough to fade assuming he gets Rondo defense. . . Which I would assume Rondo will be guarding him, because Rondo vs CJM is an even worse matchup. Lillard is very much in play tonight

Blazer frontcourt – pretty much dart throws for me. This FC is tough to predict.

Warriors AT Bucks; Curry- Questionable, Klay, Livingston, Iggy all probable. If all warriors are healthy, I will have limited exposure to GSW. They all take usage away from each other. If Curry is out, KD is definitely in play.

GPP – Khris Middleton, 6,800 – For me, this would be a price play. Middleton under 7k in a big pace up spot. Middleton is locked into his minutes, and has GPP upside (he just hasn’t shown it recently).

Knicks AT Timberwolves; I will have very limited exposure to this game.

Grizzlies AT Nuggets; Conley and Parsons OUT. Gary Harris is OUT, Paul Millsap is OUT. With Harris out, Jamal Murray carries the highest usage rate at 29.3%, followed by Jokic at 26%. Jokic carries the highest FP/min rate at 1.31/min. Given Memphis’s current injury situation, I would prefer to attack them with wings as Gasol grades out as an elite rim protector.

GPP – Will Barton, 5,500 – Barton is in a slump right now, but this is a perfect spot for him to get his ‘thrill’ back. I really like him as a GPP play today.

GPP – Jamall Murray, 5,800 – Murray was in the 6k range the last few games, I’m sure DK adjusted his price for this matchup. Well you know what, now Harris is out, so we should all thank DK for the value that can be found in J Murray. I like Murray in all formats, he should be considered a top play tonight

Elite GPP – Tyreke Evans, 8,300 – With Gary Harris out, we should also upgrade Evans. Denver loses an elite Denver with Harris off the court.

Rockets AT Suns; Chriss OUT, J Jackson Doubtful, Dragan Bender Starting. James harden OUT, Mbah Moute OUT, NeNe OUT. We can attack the Suns from any position. So again, I like targeting guys who soak up usage (CP3 for example). We can attack the Rockets at the SG, SF, and C position. If I had to make a prediction; I’d guess the winning lineup tonight has exposure to this game.

Elite GPP – Chris Paul, 10,600 – His price is up, which may keep ownership down, but I believe he is fully capable of hitting GPP value at this price in this matchup.

Elite GPP – TJ Warren, 6,200 – Assuming CP3 matches up against Booker, I think this will open up things for TJ Warren.

Value – Dragan Bender, min priced on FD – Bender played max minutes last time out as a starter. You could argue playing him on either site if he assumes the same role.

Blog will be updated at 4pm central; final thoughts (maybe spots I missed) plus my tourney template will be posted below