We have a massive 11 game slate to tackle tonight. This will always give the edge to those who stick to their research process. The other thing I like about large slates is ownership should be spread out.

Heat, Mavericks, Magic, Thunder, and the Blazers are all on back to backs. The far-right column has relevant injury news as of this morning. please use whatever resource you prefer to monitor injury situations throughout the day… RG Alerts is a great tool 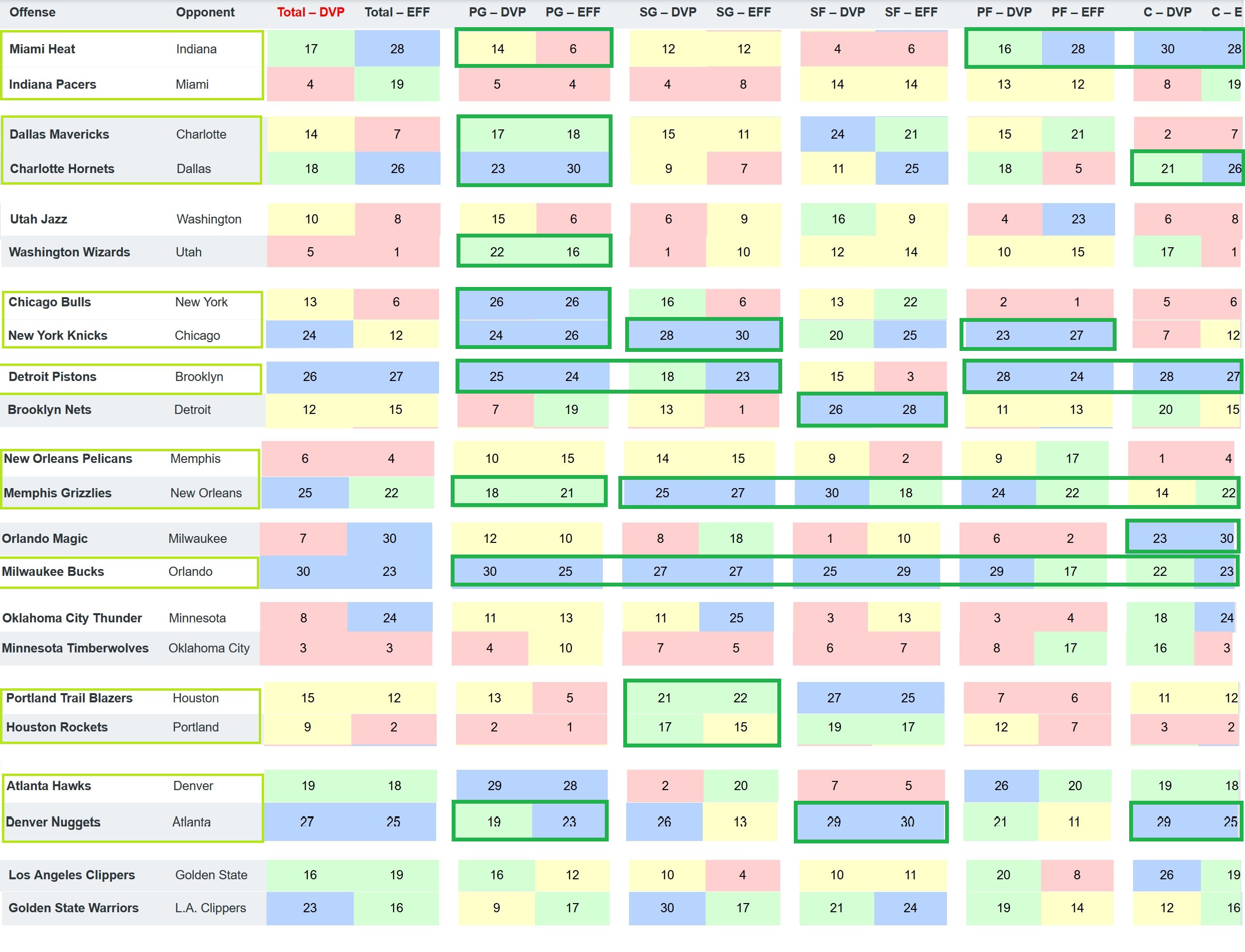 I like to take a big picture approach first. I’m also a visual learner so I prefer this DvP sheet that can be found in the First Look article from Rotogrinders. The matchups circled in green are spots that stick out to me at first glance. I haven’t looked at pricing though, so my thoughts could change as I research the slate more. For example; The Pelicans vs Grizzlies could provide some great fantasy production, but I did not circle anyone from the Peli’s side. I will definitely be giving the Peli’s a strong look, especially if Davis is ruled out, nothing just stands out to me. Obviously, Boogie gets a huge boost if Brow is out, but attacking Gasol still has me hesitate. Jru holiday might be the play.

Game notes/breakdown
Heat at Pacers; Waiters, Winslow, OUT, JJ Doubtful, TJ questionable, Turner OUT. We can attack the pacers at the PG, PF, C positions. We can attack the Heat at the SF & PF positions. If TJ is ruled out, I’ll be plugging Dragic into my lineup again (most likely), his FP/min rate jumps to 1.35/min in that situation. Whiteside’s minutes have steadily ticked up, he makes for an excellent GPP play tonight based on his price and minutes uncertainty. Bam’s price hasn’t changed and that 50 burger he put up is hard to ignore. On the Indy side; Oladipo is arguably matchup proof but his price is getting up there. I am definitely not the Lance Stephenson whisperer, but if this game goes small, he would be in play at 4,700. With turner out, Sabonis gets a nice upgrade as well.

Mav’s at Hornets; Mav’s on B2B, DSJ homecoming game. We can attack DAL at the PG & C spot & we can attack Kemba. On paper, this is an excellent Dwight and Kemba spot and if you like narratives, you can roster up DSJ.

Jazz at Wizards; pace down spot, Wall is still under priced at 8,500. Rubio is more appealing on FD at 4,800, but he has not been good on the road as of late.

Bulls at Knicks; Mirotic doubtful, Beasley questionable. We can attack the bulls at the PG, SG, SF, & PF spots. We can attack the Knicks at the PG spot. At 8,300, Porzingis is in play tonight. Kris Dunn is the man, but his price is getting up there. On a slate with many guards, Dunn greats out as a GPP play only for me. W/ Mirotic doubtful, Bobby Portis is firmly in play.

Pistons at Nets; Carroll OUT, Crabbe Doubtful. We can attack the nets in from every position. We can attack the Pistons at the SF/PF spot. Rondae Hollis-Jefferson is an excellent play on DK tonight at 6,600. The net’s will need his production and that is a spot we can exploit vs the Pistons. Tonight could be an excellent night to bang the drum, I’m not sure who will be able to match up with him from the nets. Avery Bradley is firmly in play on FD and is playable on DK. LeVert disappointed against the Raptors going 2 or 13 from the field. Tobias has also been taking more shots recently and his production is up. Sneaky game stack opportunity right here

Pelican’s at Grizzlies; Brow Doubtful. We can attack the Pelican’s at the PG-PF spots. We can attack the grizzles with guards. Tyreke Evan’s has seen lots of minutes and has been consistent fantasy producer as of late. Assuming Brow sits, I really like Jrue Holiday at 6,900 in this spot. His usage and production bumps up with Brow off the court. Boogie sees the largest usage bump with Brow off the court. He is firmly in play tonight, but he is also priced up.

Magic at Bucks; Magic on a B2B. The magic just look so bad right now. We have real blowout concerns in this spot tonight. Who knows, it’s not like Jason Kid is that great of a coach, maybe this game stays close, ha. It deep field GPP’s you could go with the mini game stack approach here. . . Maybe pair it up with the Nets/Pistons game. Or you could plug Brogdon in on DK as a steady fantasy producer type of play. Bledsoe at 7k vs ELF defense is interesting. He could probably get to 40+ on limited minutes.

Thunder at Timberwolves; Roberson OUT, Teague questionable. On paper (DvP), this matchup doesn’t look great. But, due to each teams tight rotation, this is a game you can target. Adam’s is a tough matchup, but Towns at 8,900 is very attractive. Gibson, vs Melo, might be my preferred route at 5,700. Everyone loves Jimmy, but I’m not a fan of his price and this matchup (overall).

Blazers at Rockets; Lillard Questionable, normal guys for the rockets are still OUT. Eric Gordon is one of my preferred targets in this game. At 7,200, his price will probably keep ownership down. But, with Harden off the court, his scoring and peripheral stats have ticked up substantially. CJM is also interesting for the Blazers; if Lillard sits, I’ll be locking in CJM. Nurkic is also interesting at 6,600.

Hawks at Nuggets; We can attack Schroder and the Hawks frontcourt. Jamal Murray has been taking tons of shots and now gets an elite matchup; he’s a great GPP play tonight. Bazemore and Gary Harris pretty much cross each other out (imo). Lyles has been a beast but his price is starting to catch up, GPP consideration. Seems like Lyles as been eating into Barton’s production, and Will the Thrill only played 18 minutes against GSW. Recency bias will scare people away, but 5,600 for a guy who can get to 50 makes me interested. For tournaments, this is a great time to NOT take the “wait and see approach” with his minutes. Will Barton makes for a great GPP play tonight. Saved the best for last. Nikola Jokic. Jokic is such a beast; he has an elite matchup and is priced lower than Towns. Jokic is an excellent play tonight.

Clippers at Warriors; Splash bros OUT. Milos/Blake OUT. Kevin Durant, grades out as the best stud of the night in this situation. 100% Durant. Jawun Evans & Lou Williams & CJ Williams (punt play) on the clippers side of this game.

Game breakdowns are brutal, not sure I’ll do that again on an 11-game slate

Best of luck to everyone