We have an eight-game slate to break down tonight. With NFL coming to an end; these NBA fields are only going to get sharper. I think bankroll management, chalky ownership pivots, roster construction, and interpreting injury news correctly is going to be vital to your success moving forward.

Tonight, we already have many games with high totals posted. We all know the Nuggets/Warriors game will also carry a high total. That is six on paper spots to attack. Hopefully this spreads out ownership a bit and hopefully we are very concentrated on the right plays.

Best games to target on paper (lots of them, ha!);
Rockets AT Bulls
Raptors AT Nets
Nuggets AT Warriors
Hawks AT Clippers
Bucks AT Pacers
Cavaliers AT Timberwolves
Spurs AT Kings – potential value spot

Relevant injury news/situations
DeMarre Caroll is OUT & Caris LeVert is probable
Nikola Mirotic is doubtful – Significant upgrades to Lauri & Bobby
Nene Hilario is still out – We can predict Houston will go with a small ball approach again
Kawhi Leonard, Rudy Gay, Manu Ginobili, Danny Green are all out AND the spurs are on a B2B – proceed with caution
Kevin Durant – OUT – Curry is very much in play tonight
George Hill & Frank Mason are OUT – Fox is in play
Blake Griffin – OUT

Bold call of the day; Rockets at Bulls game wins someone a GPP today. This is the game I want to fully understand.

The Rockets have played three full games without their all-star James Harden. Obviously, Chris Paul, Eric Gordon, and Clint Capela have seen the largest usage bumps. However, we have yet to see an elite game from CP3 or elite minutes from Capela. Matchups aside; Mike D’Antoni appears to prefer a small-ball approach, which has limited Capela to 23-27 minutes in these three games. In my opinion, this small-ball approach increases pace and creates matchup opportunities we can take advantage of.

Against the Warriors; this small-ball approach led to a great matchup spot for Draymond who finished with a 17/14/10 line.

Against the Pistons; this small-ball approach led to a great matchup spot for Tobias who finished with a 27/8/1 line. *Due note, Drum was ruled out in this game. Another thing to note, Gerald green wasn’t as efficient and Capela saw a minute’s uptick. 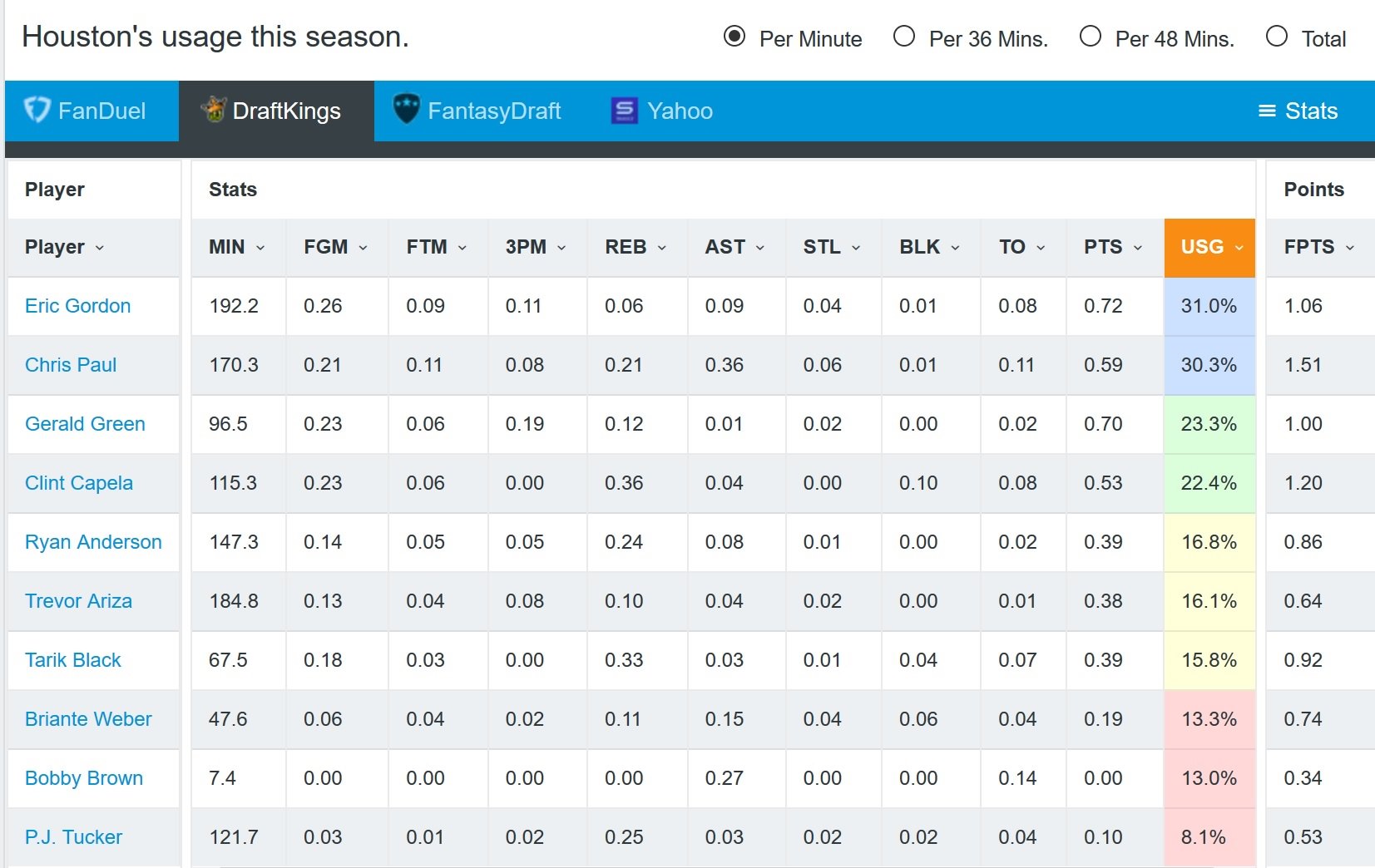 The best players to target on the Rockets is Chris Paul and Eric Gordon. Much of “(player-popup #eric-gordon)Eric Gordon”:/players/eric-gordon-1077’s usage depends on if his shot is falling. For example; he was very efficient vs GSW resulting in 21 FGA’s 10 of which were 3PA’s. The downside to the Rockets is DK has done a very good job at adjusting their prices. One way we can target this game is to take advantage of Houston’s small-ball lineup and pace by rostering a few Chicago players.

Update; Mirotic is doubtful for this game

If you want exposure to some other studs on the slate; I still think getting value from this game will be crucial. Justin Holiday, Bobby Portis, Lauri Markkanen, Kris Dunn are all firmly in play.

I should be able to post one image that captivates everything that needs to be said for this situation. 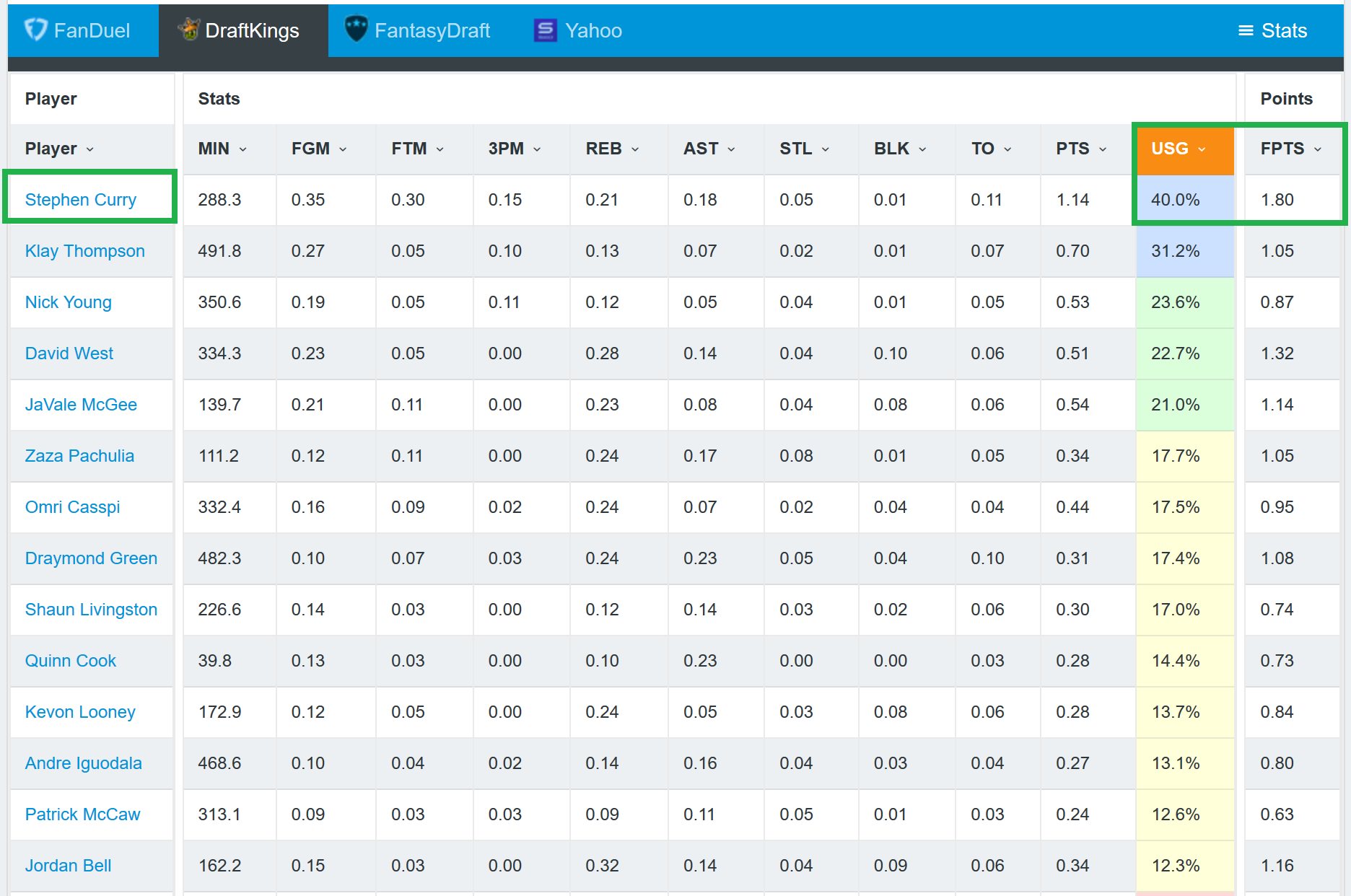 “Hey AP, who would you pick,

When anyone talks tonight, or asks a question about anything, my response will probably be Curry. Lmao. Seriously though, the matchup is elite as it can get. Sure, the game could definitely get out of hand, but even in that situation I see Curry getting you 5x.

Here’s my problem; CP3 also has an elite matchup & arguably has more peripheral / triple double upside. So, as much as I love Curry, I do think CP3 is a very fine play, and probably the better tournament play if Curry happens to be chalk.

This is where I’ll heavily weight price, matchups, and injury situational usage shifts (made up term/phrase, sounds pretty cool though).

Oladipo – I was all over him in his return and he did not disappoint. I’m wondering if this will make him popular against the Bucks. I know “wings vs the bucks is a theme” but avoiding a chalky shooting dependent player is also a theme. Currently, I’d rather spend up to Curry or CP3.

Update to come around 5pm central