Calling home runs, besides great fun, often makes the difference between a wildly profitable night in DFS and missing the cash line. Throughout the 2019 MLB season, I will endeavor to find a few home runs in three salary tiers on DraftKings. Join me throughout the year and call your home runs for monthly and seasonal RotoGrinders prizes. Without further ado, let’s play Home Run Derby! 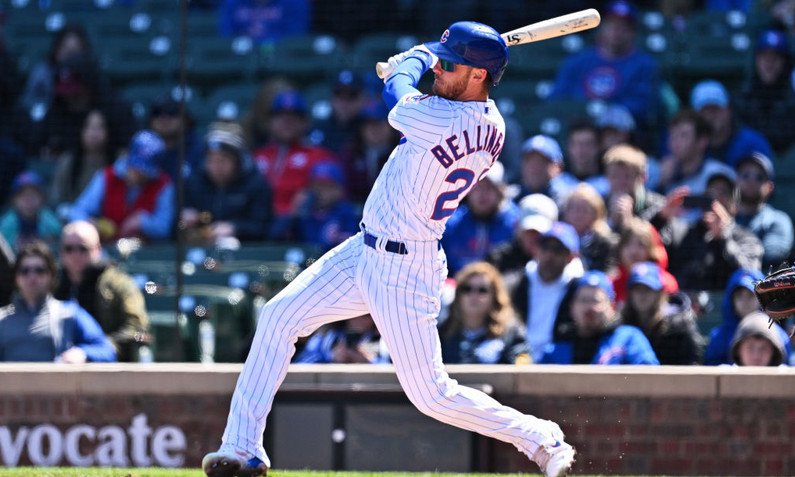 Throughout this season, I will produce the Home Run Derby for main slates on DraftKings 2-3 days per week — selecting a home run from three different pricing tiers. If you want to call your home runs, please use these tiers for your selections to be eligible for any Derby prizes. Here are the tiers.

Hitters must be selected from the DraftKings Main Slate.

Happy Tuesday, Grinders! We see a loaded slate of 15 games this evening around the MLB. With the temperatures rising, a home run explosion would not surprise anyone this evening. Fresh off of 16 runs, the Dodgers face Vincent Velasquez in Philadelphia. Coors Field hosts a game with a 14-run total. Andrew Cashner makes his Red Sox debut and the Orioles will start another jabroni in their friendly-for-hitters home confines. Just before a leaderboard update, here are my three home run calls for this loaded slate.

The statistics for each player are for the 2019 season.

Last night, Cody Bellinger went off for two home runs against Zach Eflin and the Phillies as the Dodgers routed the home team to the delight of DFS owners. This pick is not meant to be taken as lazy — especially when you consider the massive amount of options available on tonight’s loaded slate. Instead, I do not see a reason to pick anyone other than Cody Bellinger in this environment.

The only change from last night’s selection is really the price. Bellinger costs a bit more but I am sure anyone would after hitting two bombs against a bad righty. Vincent Velasquez is not Eflin-bad against lefties… but he is not good either. The Dodgers will throw the entire platoon at him, tonight. Despite a hot game in Coors Field, I am going to stick with Cody after his big night in Philly.

Regrets, I’ve had a few…

My big regret was not piling on Zach Eflin last night with additional left-handed Dodger hitters. While I had Verdugo in all three of my tournament entries last night in my Dodgers’ stacks, I did not pick him in this tier. Talk about flawed logic! I loved Cody Bellinger against Eflin for all the same reasons I should have loved Alex Verdugo.

Tonight, I will not make that mistake. Admittedly, Verdugo does not lean on the fly ball side like many of his teammates. Nevertheless, the wind is blowing out to right field, it is hot and humid in Philadelphia, and Vincent Velasquez does not provide close to enough resistance for me to avoid additional Dodgers tonight. Assuming Verdugo gets the start in the two-hole, he makes for a fine DFS play and home run call this evening.

Just in case Verdugo cedes his lineup spot to A.J. Pollock, I will just use Pollock as a pivot at $3,900 in this tier so I do not have to scramble later when I am with the children.

Khris Davis has not hit a home run since June 18th. Khris Davis only has 16 home runs this season. His ISO is only .189 this season. Marco Gonzales does not dole out many home runs. Wait, why am I picking Davis, tonight?

Because he is Khris Freakin’ Davis! That’s why! I wouldn’t care if Davis hadn’t hit a home run since 2018. In this tier, when you can latch on to a player with Davis’ track record in the power department, you latch on. Davis is still hitting the ball very hard this season when he does make contact. Marco, despite being a groundball pitcher this season, is giving up a bountiful amount of hard contact. Yeah, not going to overthink this one.

Strgzer585 and Gillik9486 hold a share of the July lead with five home runs apiece after they both collected two home runs last night. We had several contestants collect a pair of home runs — including yours truly — because of Bellinger’s big night. Otherwise, Shanekern03 is still in the lead in the overall standings with 42 home runs. WestCrook1 is his closest rival at 37 bombs. As the heat rises, more home runs will be available. Who is going to make it a big night this evening?

Will Coors Field run wild? Can the Dodgers repeat last night’s massive performance? Will Khris Davis be Khris Freakin’ Davis just for one night? I will be back on Friday with an update and the answers to all of these questions. Until then, good luck, everyone.

I am happy to announce that at the end of each month I will be rewarding the highest home run total with a RotoGrinders T-shirt. Having a rough month? Don’t let up. The RotoGrinders member with the most home runs throughout the season — until the end of August — will be awarded a 3-month Combo Premium subscription to start the NFL season!

Thanks for reading! If you enjoyed the article, stick around for the rest of the MLB season. Want to compete against me? Drop your expensive, mid-tier, and cheap home run calls in the comments (DraftKings pricing). Otherwise, give me a follow on Twitter where I typically post slate-relevant statistics and embarrassing comments about professional wrestling.