Thesis statement: Chan-heon Jung is the chalk SP2 on DK, and he very deserves to be at only $6,500.

He’s a strikeout pitcher who’s evolved through his career to improve his control and widen his pitch arsenal to prevent runs against bums like the Hanwha Eagles on the Tuesday, June 16 slate.

Jung is a 30-year old RHP in his tenth KBO season. He …errrrrch…

Let’s hit the brakes on Jung and not bury the lede: Hanwha is anemic.

But, wait, there’s more: last week, Hanwha sent ten players—some of their best players other than Jared Hoying—down to their minor league affiliate. To make a point? Who knows, but Seong-yeol Lee ain’t walkin’ through that door.

We get this out of the way to illustrate that it doesn’t take much of a pitcher at $6,500 to be worth rostering against Hanwha. Especially if we can get innings and Ks. If we can get Ks, Hanwha will do the rest to prevent runs.

While Hanwha isn’t last in K rate, as I’m pretty sure Kiwoom is worse, their 19.4% clip is pretty horrid in a league where the rate is around 17.6%.

In 2018, Jung threw his fastball 43.3% of the time, hitting the zone 50% of the time, but under 40% of the time the slider and change. So far, in 2020, he has completely abandoned the fastball for the Korean Kryptonite, the sinker.

This season, Jung has thrown the fastball only 5.6% of the time, while raising his sinker usage from 4.3% in 2018 to 34.6%. The sinker isn’t great. He throws it for strikes a bit too much (58%), but it is 87 mph—about the average speed of a KBO fastball. The velocity makes it a breaking fastball. Using this as his fastball seems to have greatly improved his curveball for whiffs. 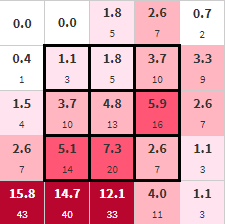 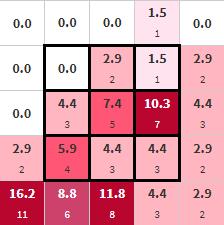 Sure, our curveball is money when it starts in the zone and the bottom drops, but when it’s the pitch where you have a contact rate of under 75%, we want some deception in the pitch. If a curveball is always dropping like Jung’s was dropping in 2018, hitters just start to lay off of it.

By flirting with the bottom of the zone and hanging some with large breaks into the zone, Jung can get more called strikes when he freezes the hitter who is told to take the curve. This can also create more chases if a batter has caught onto the fact that Jung can throw it for a strike.

This is the long way of saying that there is something legit, to a degree, about Jung’s 9.78 K/9 this year and something very sticky about his greatly improved 2.35 BB/9.

And this is all to say that Jung is not the pitcher he was in 2018. That he is greatly improved. And in line for a big one against the woeful Eagles tomorrow morning.

Besides, we need money to bats on this slate and Jung is the only SP under $7,500 who isn’t horrible. It’s why he’ll be chalk, but we’re playing worthy chalk as it’s super cheap chalk.

— I have no idea who to play at SP1, but it isn’t Aaron Brooks. He has the talent and the Korean Kryptonite sinker, but the NC Dinos are a matchup we just don’t touch. Not for cuteness. Not for leverage.

— I still think Raul Alcantara sucks. Not enough Ks in his stuff and too many HRs.

— Bats are fun. Kiwoom and Doosan will be the hot pairing with our cheap SP2. I recommend picking just one and pairing with LG or even, gulp, SK. Samsung is the leverage stack against Alcantara. I’m more of a single lineup guy, leaning Kiwoom and wincing SK. Doosan faces a lefty and that can be unpredictable for their lefty power. If Roberto Ramos is back in the lineup after a rest with a bad back, it will be hard to not go Kiwoom-LG.Gotta play my boy.

— The contests got bigger on FD and DK. I hope there were plenty of complaints. I also hope this isn’t a one-off to just take advantage of people spending PGA, MMA, and Nascar money. That these hold. The best way to keep them going is to play, y’alls. PLAY!