Welcome back to the blog! If you read last week’s premiere, you know that I am completely new to MLB DFS. If you are new to the blog, welcome! Last week I learned the hard way that pitching wins are vital to Fanduel MLB DFS, even in GPPs which is what this blog is based on. My week 2 strategy was to pay up for the best pitcher I could that I believed had a good K% & a great chance at getting the win while still trying to stack teams in a good position to score 4+ runs. Lets see my high & low for the week and break them down. 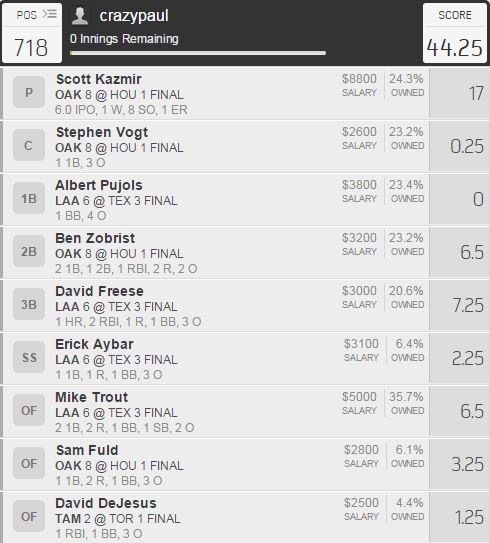 Thoughts Before:
I started off this week looking for the best pitcher I could get with a high K% & chance to win at the best price. This day Scott Kazmir was one of my targets. He played great in his first start to the season and was facing the Astros who tend to strikeout at a high rate. I also liked the A’s bats against Astros starter Scott Feldman so I stacked 3 of them. Using the three A’s bats were pretty cheap so It allowed me to stack my favorite team for the day as well, the Angels against Ross Detwiler in the Ballpark in Arlington.

Thoughts After:
Boom! My best score yet! Kazmir paid off big with 8 K’s & the win. He only lasted 6 innings, but who can complain about that right? The A’s stack did decent and the Angels stack paid off with 16 points. This lineup could have been huge if Pujols didnt give me the goose egg, but as I am quickly learning, that’s baseball.

Worst Lineup of the Week: 16 FTPS 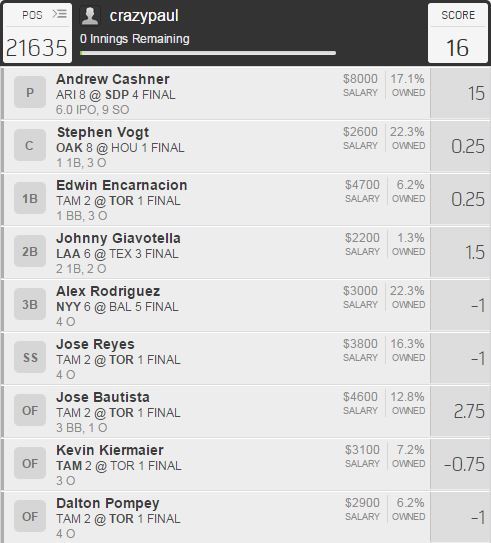 Thoughts Before:
Andrew Cashner was my 2nd favorite SP this day and seemed like a sure thing. Stud SP + Petco + bad opposing SP in Rubby De La Rosa = must play in my book. I really liked the BlueJays bats at home against the Rays so I stacked them up. After my BlueJays stack I didn’t have much salary left so I just filled in with bats I could afford that I thought had good matchups.

Thoughts After:
Welp. Cashner had a decent score with 15 FTPS, but that game was weird. Arizona scored 4 runs in the 2nd inning due to an error, and Rubby De La Rosa locked down the Padres bats. I got lucky there, but not so much with my bats. Jake Odorizzi completely destroyed the BlueJays killing any hopes I had of this lineup cashing & my fill in bats did nothing.

Week 2 was a much better week for me than week 1. I still didn’t cash much, only 4 times. However, my average score out of 22 total GPP lineups was 30.21. That is much better than last weeks average score of 23.36. I did encounter a bit of bad luck this week as well. There were at least 6 lineups this week that missed the cash line by less than 2 FTPS, so I’m going to chalk that up to bad luck and keep going with this same strategy next week.