Have you ever loved something so much, yet knew it was so bad for you but couldn’t stay away? That is how I am beginning to feel about MLB DFS. I played it every year from when I was 5 years old throughout high school. I’ve watched baseball all my life, been to numerous games, & have played season long fantasy for almost 2 decades. Yet I find my self in a struggle to grasp MLB DFS. My scores have been decent, but each day something goes wrong, even on the good days. I’ve quickly learned the variance in MLB DFS is extreme, but I’m determined to figure this out so lets see what went right & wrong this week for me 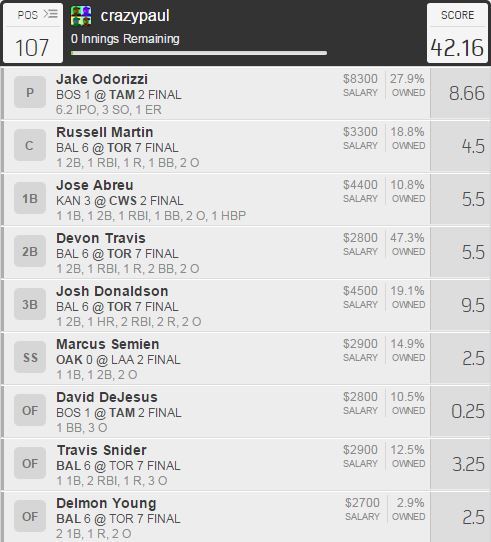 Thoughts Before:
I have to admit something, I made a noob mistake. This lineup is actually my cash game lineup that I forgot to convert into a GPP stack after making my lineups in the morning. I built my own projection model to find players in good situations for cash games and this is the lineup I came up with for this day. With that said I chose Odorizzi because he started the year off hot, and was playing at home. This was also a Thursday, and there were only 4 night games so he stood out as the best of the bunch to me. The BAL/TOR game had a high O/U so I targeted that game with only 4 games to choose from and picked my favorite bats from the rest.

Thoughts After:
What do you know, my cash game lineup resulted in my best GPP finish of the season, just missing the top 100 in the Bunt. Odorizzi pitched well, but didnt pick up the win & 6 out of 8 bats had positive FTPS for the day, exactly what I’d want from a cash game lineup. After this result I have decided to throw my cash game lineup into 1 GPP a night, as it will be contrarian to the stacks and could be unique. 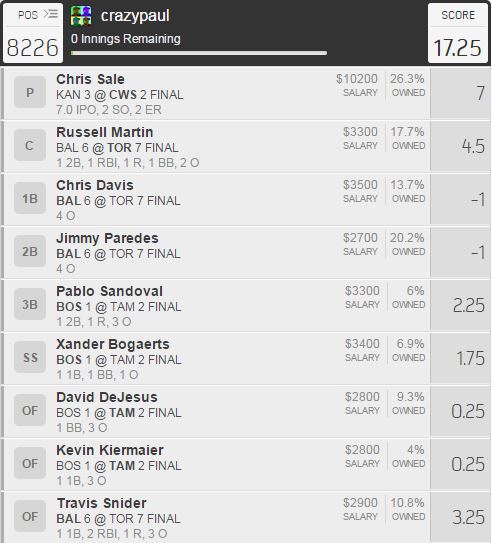 Thoughts Before:
It’s a 4 game slate and Chris Sale is pitching. He actually wasnt my favorite SP of the day, but he was close. I figured since he was expensive & playing the red hot Royals that he would be low owned, so I went with him. I really liked the Orioles this day so I started my stacking with them. I couldn’t afford 4 of them with Sale and make a lineup I liked so I used Davis & Snider to give my lineup some power in what I predicted to be a high scoring matchup and added Paredes who was a great value.

Thoughts After:
What the hell was I thinking? To be honest, I hated this lineup and I’m not sure why I used it. As my cash game lineup shows, I really thought the BOS/TB game would be low scoring, but somehow 4 players from that game filled out the rest of this GPP lineup. I blame myself and really latching onto Chris Sale instead of moving off of him. I thought the bad matchup & high salary would result in a very low ownership, but I was wrong. He only scored 7 points and the fact that I used him really forced my hand with my bats.

Once again my best & worst lineups are on the same day. That seems to be a trend and I’m not sure why. This week my average score out of 20 GPP lineups was 28.43 FTPS. A little lower than last week, but still acceptable. Also my lowest score each week has improved, so I am happy with that. I’ve really been trying to stack 2 teams per GPP lineup so this upcoming week I’m only stacking 1 team per lineup and filling in the rest. I am also going to target the stack first, then the SP, then fill in’s. That was I can be sure I am using the players I like best from the stack I like best. Check back next week to see how it went.