Did anyone else have trouble picking a pitcher this past week? Using a mix of top-tier, mid-tier, and low-tier pitchers, I managed to not pick a single pitcher who got the win all week. That seems almost impossible. However, there is good news to come. Let’s check out my high & low for the week and break them down so hopefully we learn something. 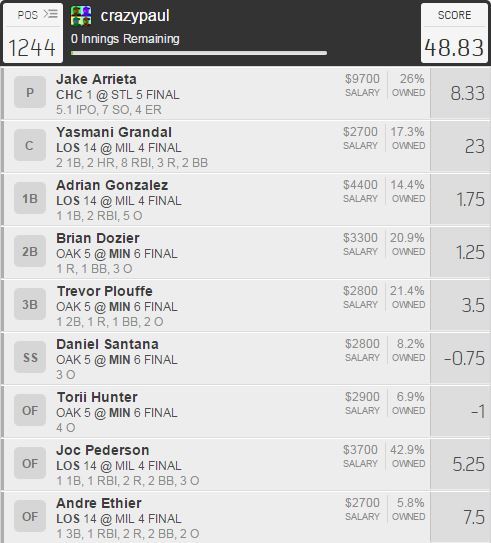 Thoughts Before:
This was an early games only slate, so there weren’t many games to choose from. The Dodgers were playing and I have been riding them pretty hard in GPPs over the last 2 weeks, as they have been one of the highest scoring teams day in and day out. Facing the Brewers & Mike Fiers who I have not trusted all season, I decided to load up on Dodger lefties. I also liked the Dodgers today because a lot of DFS touts were saying Fiers was a good start and I felt the opposite, so I was hoping for lower ownership on the short slate. I then paid up for Arrieta against the Cardinals. I didn’t love the matchup, but with limited options, he seemed to be the best overall pitcher. I finished the lineup with a full Twins stack. Pomeranz has not been pitching well for the A’s and it seemed like a good spot for them.

Thoughts After:
Can you say Yasmani Grandal without getting overly excited? I bet you can’t if you used him today. 23 FTPS from a positional player is almost unheard of. My research was right on with the Dodgers stack and going against Fiers at home. The Dodgers stack combined for a whopping 37.5 FTPS, by far my best stack combination of the season. My research on the Twins against Pomeranz turned out to be correct as well, however I just didn’t have the right players in my stack. Arrieta disappointed with only 8.33 FTPS and that was a trend with my pitching all week. 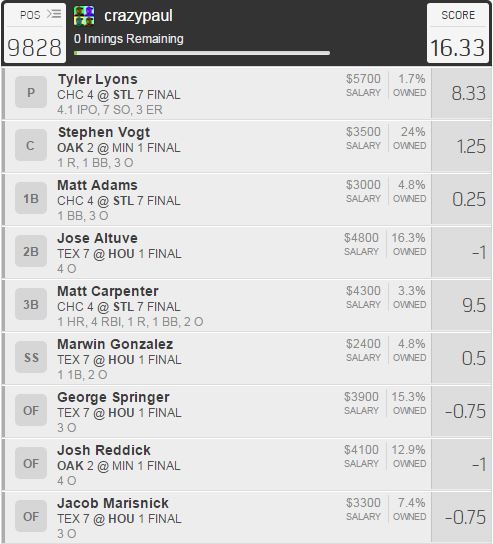 Thoughts Before:
I like to target Wandy Rodriguez against power hitting teams loaded with righties. Over the last 2 seasons, Rodriguez has a .379 wOBA against RHB. The Astros have been hot to start the season, and even though they have cooled off some the last 7 days, I liked them against Rodriguez. I also liked the A’s lefties against Trevor May who last season had a .393 wOBA allowed against LHB, so I used Vogt & Reddick who have been on fire lately. I then targeted Matt Carpenter and Matt Adams who both had a favorable matchup against Kyle Hendricks. I picked my pitcher last this day and only had enough salary left for Tyler Lyons. He wasn’t an ideal pitcher to use, but I knew he would have low ownership and I really liked the bats I used today.

Thoughts After:
That did not go well. The Astros got shutdown by Wandy Rodriguez, who by looking at the numbers, has vastly improved on his splits versus RHB, now having a .266 wOBA against this season. The A’s & Twins game combined for 3 total runs & the only bright spot was Matt Carpenter with 9.5 FTPS. While he didn’t pitch that great, Tyler Lyons was decent at minimum salary with 8.33 FTPS.

Like I said in the intro, I did not pick a single pitcher all week that got a win. Not a single one. However, I still managed to average 32.36 FTPS this week, just 2.64 FTPS shy of my weekly goal. I also managed to have my highest score to date with 48.83 FTPS and had my first break-even week of the season. That’s right, the tides seem to be turning. I once again missed out on cashing 3 different lineups by less than 2 points, so I am close. Out of every lineup I did this week, I mostly nailed my stacks. In fact, I feel very confident now in that aspect. It’s very apparent however that I still have a lot of work to do when picking a pitcher. No matter if I paid up or down, I just kept missing. Each week I have improved, so next week I’m going to work the same strategies, but really focus on my pitching research as I will admit I have slacked on some. How did your week go? Are you having issues picking a pitcher as well? Let me know in the comments, maybe we can all learn from each other.