We’re coming in off of a high from last week’s blog. Last week we scored a new season high yet again, and we also had our first break-even week of the year. Lets see if we can match or exceed last week’s results this week. 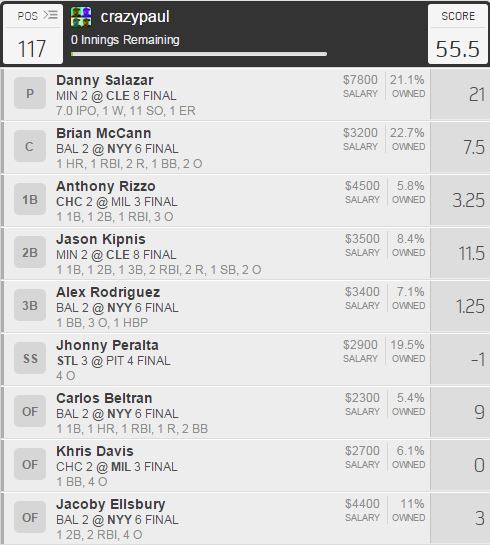 Thoughts Before:
When looking for a pitcher to target, Bud Norris immediately stood out to me. The game was at Yankees Stadium & Norris has been horrible this year with a 9.75 ERA, 14% K rate, 4.96 SIERA, & a 5.07 xFIP. I like any Yankees lefty in this situation so I targeted McCann & Ellsbury. Carlos Beltran hasn’t done much this year, but I just have a feeling he’s due so I tossed him in as well. The last piece of my stack is either gong to be Gardner based on L vs R matchup or Arod. I wanted the chance at some power so I went Arod. Next up in my roster construction I wanted to target a pitcher with a great chance at the win and a lot of K’s. Pineda was my first target, but since I wanted 4 Yankees bats against Norris I moved to Danny Salazar. While Salazar has an ERA of 3.81 on the season, his SIERA is only 2.08 & his xFIP is only 2.18 suggesting he has been much better than his ERA indicates. He also boasts a very nice 34.6% K rate on the year. Filling out the rest of this roster I’m targeting individual bats I like in good spots. Jason Kipnis was my number 1 target. He’s been hot the last week, should be low owned, and according to Insiders Edge is slugging .485 and hitting .307 against similar pitchers as Trevor May the last 2 years. I then used Peralta who’s been my go to punt at SS lately, Rizzo who’s also been hot the last two weeks, and Khris Davis who had 2 big games in row and I was hoping to ride the wave 1 more day.

Thoughts After:
Finally, the 50 FTP barrier has been broken! It feels so good. The Yankees stack combined for 20.75 FTPS and my hunch on Beltran paid off. Salazar did have the game I was looking for with 1 ER & 11 K’s but Pineda would have been the better choice if I did a 3 stack of Yankees instead, but I’m very happy nonetheless. Kipnis paid off huge & Rizzo had a decent game. The only thing that didn’t pan out was Davis & Peralta. It feels good to see my process come together like this. 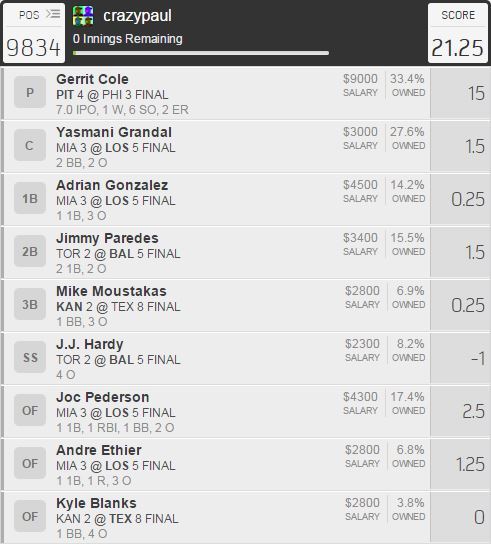 Thoughts Before:
The Dodgers are playing at home, against the Marlins, and Tom Koehler is right handed. What does that mean? It means I am going to load up on baseball’s best hitting team which features some of the deadliest left handed hitting in the game. Next is pitching. Lately I have been targeting the Phillies as much as I can. Granted, the Phillies are loaded with LH batters, but Cole is just too good to pass up in this matchup and the Phillies are not very good no matter what hand the pitcher throws with. To finish this lineup off I had minimal salary to work with. Parades has been one of the best second baseman in daily fantasy and with a salary of only $3400 I’m willing to buy here. Kyle Blanks has been mashing LH pitchers lately and only costs $2800, Moustakas is also $2800, leaving almost the minimum for my shortstop. J.J. Hardy is a decent punt here for $2300 with HR upside.

Thoughts After:
Sometimes things just don’t go your way. Cole got me 15 ftps which is great, but my bats just sputtered. The Dodgers scored 5 runs against the Marlins, but somehow my players really didn’t see any fantasy production out of it. Combine that with the fact that my plug-in players combined for .75 FTPS and this roster was doomed.

This was my best week and at the same time my most frustrating week of the season so far. I started Sunday off gangbusters with that 55.5 FTP lineup, my highest scoring lineup of the season and that cash allowed me to break-even once again. However, I will admit that the rest of the week I did not cash a single time, having 3 more near misses by less than 3 FTPS, leaving me feeling that I missed a great opportunity to build on my bankroll this week. My average score for the week was 34.21 FTPS a game, also my highest average of the season, yet I just ended the week feeling defeated and took Friday & Saturday off to reset my mind. The last 3-4 weeks I have improved a lot, but I cant help but feel frustrated that I keep missing the cash line by 0-3 points on an almost nightly basis. I like my strategy of picking a stack-pitcher-fill ins, but maybe that is preventing me from getting over the hump. Are any of you continually getting to that 40 point line but just missing the cash? Hopefully a new week brings a new win streak.