NBA December 12th, 2019: How To Be Contrarian Without Being an Idiot

Yesterday I talked about a few players that I thought were going to be under owned relative to their potential output and I think it worked out for the most part. Malcolm Brogdon, D’Angelo Russell, and Spencer Dinwiddie put up respectable scores at fairly low ownership, while Kawhi Leonard underperformed for his price at 17% ownership. I also mentioned to consider playing some Pelicans if you plan on stacking Milwaukee. How many of you had a Bledsoe, Middleton, Ilyasova, Redick stack? Me neither. Lets move on to today’s 4 game slate.

Today I want to focus less on individual players and more on trends. I want to investigate how to be contrarian on a small slate, when there are only so many options. How can you find an ownership edge? I have my own ideas but I want to validate them using data from ResultsDB. I’m going to look back at the last five 4 game slates and try to identify trends in the GPP winning lineup, and see if we can apply them to today’s slate. 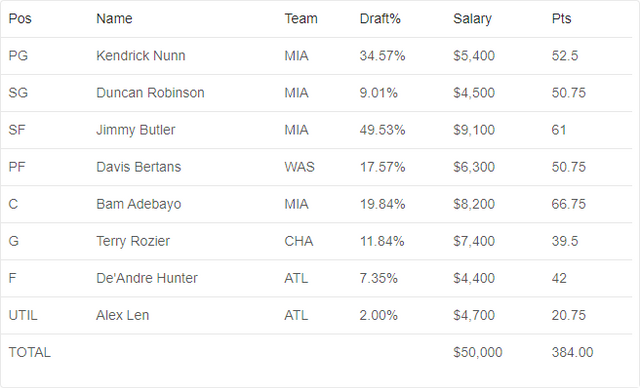 As you can see the winning lineup utilized a game stack of the Miami/Atlanta game which ended up in overtime. These types of things are generally difficult to predict and are pretty rare for a 4 game slate. Typical odds on a game going to overtime are about 10/1. In this particular slate, there were two games that stood out to most players. Washington/Charlotte and Atlanta/Miami. Although Will Barton did end up in the optimal lineup, he wouldn’t have put up that stat line if Jamal Murray didn’t get hurt in the first 5 minutes. Denver and Philadelphia are both great real life basketball teams, but they both have elite defense and their stars are typically priced high and should only be used under certain game conditions. Portland and New York was projected to be a blowout, the big story in this one was Carmelo’s first game against New York since returning to the league. He didn’t really perform as many expected, but he garnered 34% ownership. Last night I talked about correlation and how it can be easily forgotten when stacking a team. Miami was highly owned with Nunn (35%) and Butler (50%) leading the way. Herro (22%) and Adebayo (20%) were not far behind. The highest owned Atlanta player? Jabari Parker at 10%. Trae Young and DeAndre Hunter both sat at about 7%. 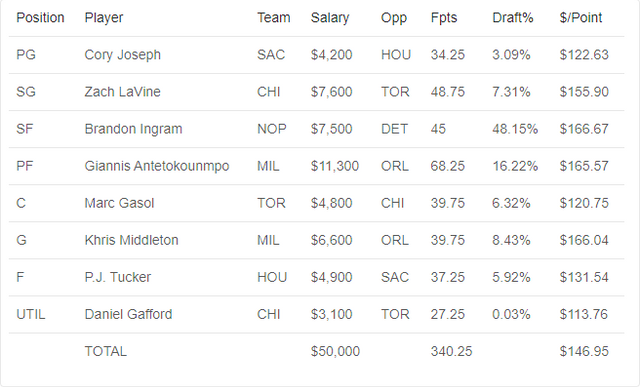 The big news story of this slate, was that Toronto would be missing Fred VanVleet, which pushed a lot of ownership towards the other Raptors. Kyle Lowry and Pascal Siakam were the only players above 50% ownership on this slate. Both of them put up a dud. New Orleans led the next group of ownership with Brandon Ingram, Jrue Holiday and Jahlil Okafor? Okafor was ruled as the starter before lock which drove his ownership up to 44%. I get it, there was a number of high priced stars on this particular slate and it was starved of value. Despite this, there was still significant risk with Okafor. He had started a few days prior and played a total of 9 minutes. He was going to have deal with Andre Drummond inside. He is also Jahlil Okafor and hasn’t done anything for DFS players in a long time. Anyways, getting back to the optimal lineup, some of these plays were risky, but understandable. Cory Joseph had been playing a ton of minutes since he took over the starting gig, and while he has mostly done nothing with those minutes, he has shown significant upside from time to time. Zach LaVine took advantage of a team who clearly hasn’t looked right on both ends of the floor since their starting SG went down. Ingram made a lot of sense when the starting lineup was announced. Kenrich Williams and Jahlil Okafor started for Jaxson Hayes and Lonzo Ball. That meant that Ingram would need to do more ball handling and shoulder more of an offensive load in that starting unit. Giannis always makes sense regardless of the opponent, if you can fit him in you should. Gasol made sense from a DvP standpoint. He had not done much, but Chicago is one of the worst in the league when it comes to opposing centers. Middleton’s price hadn’t caught up to his production since his return from injury and PJ Tucker was coming off a great game and had a great matchup against Sacramento. Chicago had just lost in overtime the night before, which likely meant that Gafford and the rest of the bench would be getting extended run. It’s those kind of plays that can help win a GPP. 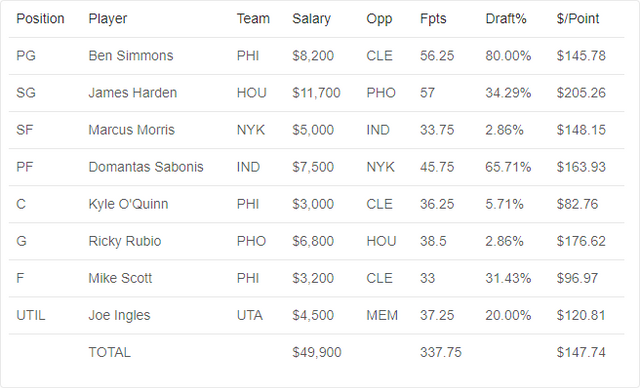 A lot of significant players sat this one out. Malcolm Brogdon and Joel Embiid were both out. Easy, plug in Aaron Holiday and Al Horford right? There is a phrase in DFS, “zig when everyone else zags.” Aaron Holiday was good, but not necessary in the optimal lineup. Al Horford was great for 22 minutes. This game got out of hand pretty quickly thanks to Mike Scott and Ben Simmons. That paved the way for Kyle O’Quinn to finish the game and end up with 27 minutes. People were obviously predicting a blowout, based on the ownership levels of Cleveland. Cedi Osman was the highest owned Cav at 8%. Yet, under 10% of players put in O’Quinn as the most likely backup to do damage in blowout run with Embiid sitting out. The rest of the optimal lineup looks pretty standard. Another point guard against Houston, Harden, Westbrook, Sabonis, Marcus Morris and Joe Ingles, these are just solid players in solid matchups. 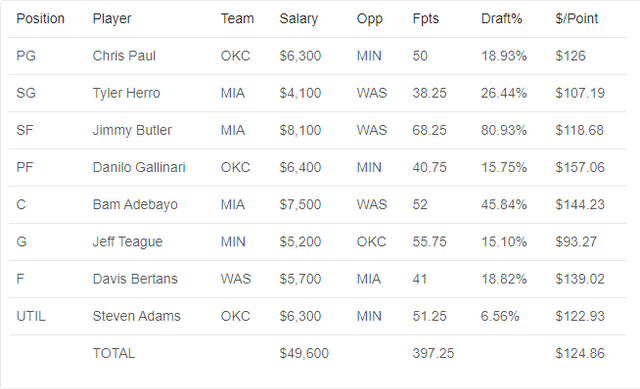 I’m starting to see a trend where DFS players like to target Washington games. Butler, Ish, Beal, Bam, Nunn, Hachimura, and Wagner were the top 7 highest owned players. This is significant because Washington is a terrible defensive team. The problem is Miami isn’t that terrible. To see so many Washington players in the top 7 allows us to differentiate. I’ve noticed that optimal lineups with 3 players from one team also feature a player from the opposing team. In this case, it’s Herro, Butler, and Adebayo with Bertans. To pick the right players of course takes some guess work but lets give it a shot. No Goran Dragic meant that Herro would see increased usage in the 2nd unit. The same news, also meant that Butler would see a big increase in peripherals with increased ball handling duties. Washington has been terrible against big men all year so Bam made a lot of sense as well. Bertans has been on fire since Thomas Bryant was ruled out for several weeks. Did you know that Minnesota is equally as bad as Washington on the defensive end? Based on ownership, i’d say most people forgot about it on this slate. The Oklahoma City/Minnesota game ended up in OT which increased these numbers a bit, but the only player from that game with high ownership was Towns at 31%. Gallinari was 2nd with 15%. 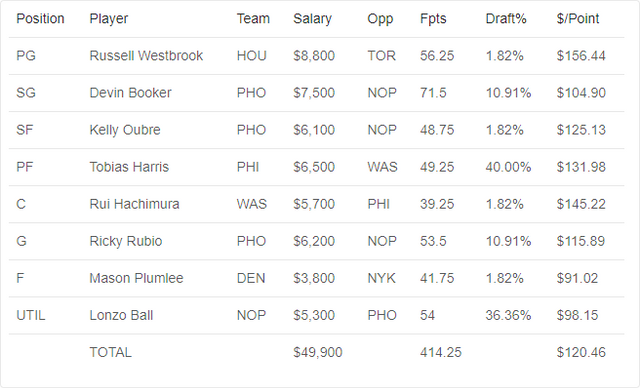 Here is another case of Washingtonitis. Ish Smith, Bradley Beal, and Embiid led the ownership on this slate. With the high price of Beal and Embiid, it limited players from taking the higher priced plays in the Pelicans/Suns game. Booker, Rubio, and Oubre were all under 20%, while Lonzo was just a shade over 20%. Westbrook made a lot of sense here because Toronto is the type of team to try and limit their opponent’s best offensive player. In this case that would be James Harden. Looking at the preseason game logs between these two teams, you can see that Westbrook’s production generally matched Harden’s. We also see another case of the 3/1 ratio with Phoenix and New Orleans. Lastly DFS players were predicting a blowout in the Denver/Knicks game, I think. Denver ownership was hovering around 5% which would suggest not many people thought Jokic, or Murray would get a full run of minutes against one of the worst teams in the league. However, Marcus Morris and Julius Randle were both over 12%, so we have a situation where the Nuggets wouldn’t get full run, but the Knicks star players would? Could the Knicks blowout the Denver Nuggets? No they lost by 37. All that aside, only 2% of people thought Mason Plumlee was good value, despite thinking the Nuggets starters wouldn’t get full run.

So how can we use this information today?

So far, we’ve uncovered a few trends. At first glance, we have 4 games with similar totals, so I don’t think we should try to spread ownership out a little bit. San Antonio currently holds a -11.5 spread, so that game could lead to a blowout. My first play is Dejounte Murray. It was recently announced that Murray would be off his minutes limit going forward, and he played 32 minutes in the OT game against Sacramento. Cleveland allows the most FPTs to opposing point guards and his usage should only go up coming off the bench. In case this game does blowout, he should be able to remain on the floor for a few extra minutes, now that his minutes limit is removed. The Celtics are coming off a B2B in which some of their starters played 35 minutes. I wouldn’t expect a single starter to play over 30 minutes in this one, as that seems to be a trend for the season. While I don’t mind Kemba Walker, I feel like we should temper our expectations on him and let the box score readers chase after Kemba. I do feel like there is some upside with Jaylen Brown who is only priced at 6600. He didn’t perform well in this spot in the first matchup, but Philadelphia has allowed guards to have big games on the road. I also think people will stay away from this game as much as possible, so he could come at low ownership. Kristaps Porzingis has been bad, but I think he turns it around tonight at low ownership. I believe there will be a good mix of fans in Mexico City for both teams, but i’d guess that more people are there to see Luka. There is a chance that Drummond misses this game with an eye issue, which would mean there are a whole bunch of rebounds up for grabs. I like Porzingis either way, but especially if Drummond misses this one. With Delon Wright missing this one, i’d take a close look at J.J Barea. He’s put up 20 FPTs in half the minutes he should see tonight, so it’s possible he can get to 25 maybe even 30.