Welcome to the first edition of the NBA play by play breakdown. In this column I’ll try to breakdown some of the finer nuances of NBA playcalling. The goal from this is to supplement our numerical research with some visual data that can help clarify some of the trends that the numbers show us when analyzing NBA games.

You’ll hear people on the forums constantly tell you that there is no substitute for watching the games and when it comes to basketball, that is absolutely the truth. As the season goes on, I’ll try to break down some “good” situations and some “bad” situations to watch out for. It won’t always be something that translates directly to fantasy sports, but I’ll do my best to help you increase your understanding of the game.

The winner of the Jeff Green trade is Courtney Lee

Small sample sizes are not a reliable measure of anything. If anything, anybody who attempts to formulate a conclusion from a sample size of one is probably going to look foolish most of the time. Given that, what good would this analysis be if it didn’t attempt to come up with some conclusions.

When Jeff Green was traded to the Memphis Grizzlies, the expectation was that he’d slot into the three spot in place of Tayshaun Prince. Prince is not known for his offensive prowess, and frankly, his athleticism and defensive will have long left his body. By bringing Green into the mix, Memphis effectively gives themselves the opportunity to no longer be playing four on five when Prince is on the court. What Memphis sacrifices defensively by adding Jeff Green (he doesn’t play defense) they gain offensively (you can’t leave Green open anywhere on the floor). While this trade will be good for Green and Memphis, the real beneficiary here is Courtney Lee.

In his first game with the Memphis Grizzlies, Courtney Lee ended up with 18 points and most of them happened when Jeff Green was on the floor. Lee took 10 shots in the game. While he didn’t contribute much else in the box score, he is now seeing a larger number of open shots, and given his aggressiveness in Memphis’ last game, that should continue. 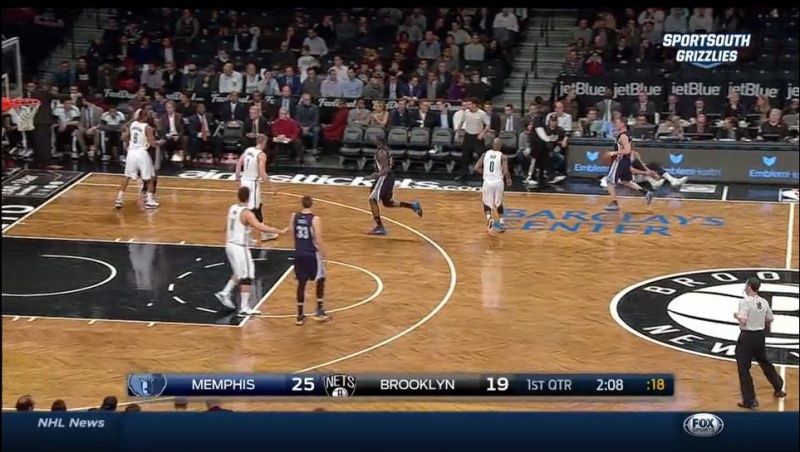 In this play Beno Udrih is bringing the ball up the court with Jarrett Jack guarding him. Jeff Green is standing in the corner waiting for the moment to begin moving without the ball. 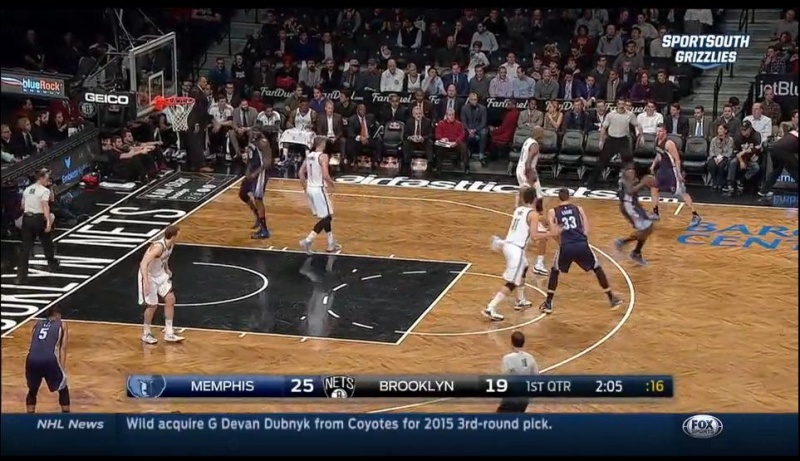 Jeff Green receives the ball from Udrih beyond the three point line with his man Anderson following closely. You can already see Marc Gasol anticipating Green’s dribble motion and is setting a screen on Anderson for Green to go around to the other side of the court. 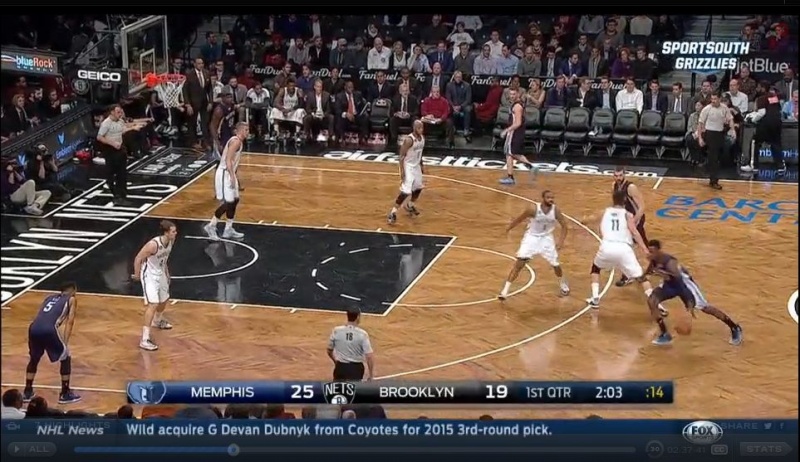 By setting that screen, Green gets enough separation on Anderson and allows himself a chance to look up and survey the open lane to the basket. Instead, he dribbles and does a handoff to Courtney Lee who had been waiting in the corner guarded by Bojan Bogdanovic. 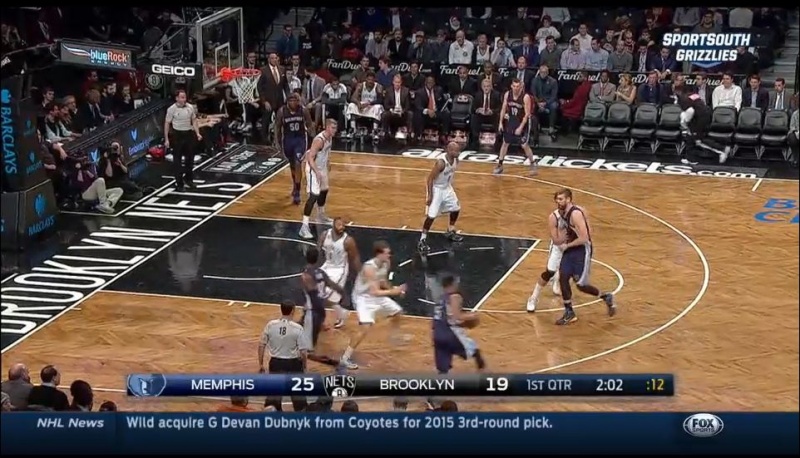 Lee gets the dribble handoff and you can see Gasol already bracing to set a second screen for Lee. Notice Green’s man is still staying close to Green and not fading from him to guard the driving Lee. 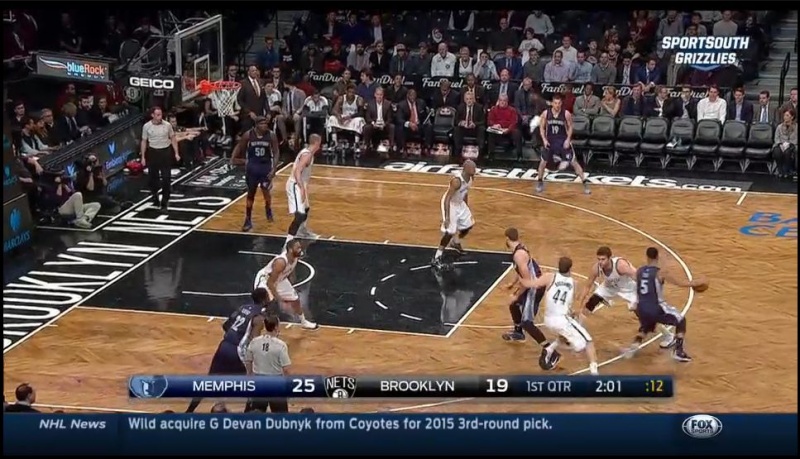 With Marc Gasol setting a screen that keeps Bojan far from Lee, Brook Lopez sticks his leg out to slow down Lee while Bojan recovers and fights over the screen. In doing so, Bojan ends up on the floor and Anderson is looking to defend Lee. 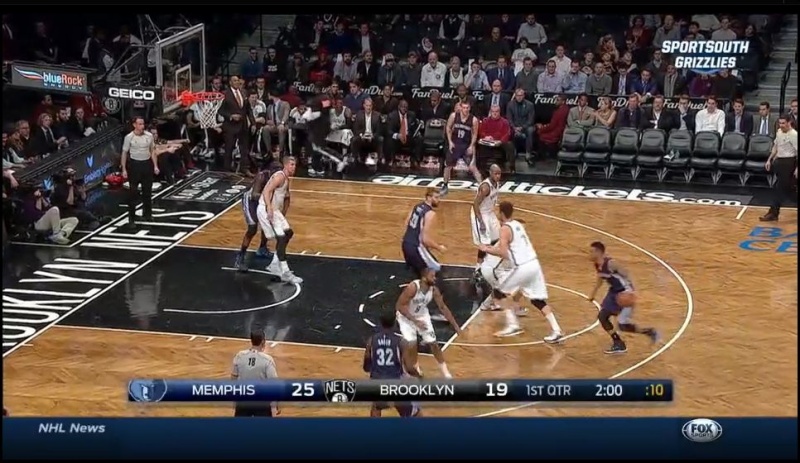 Lee sees the open lane to the basket, and with Bojan on the floor, Lopez turning his back on him, Lee will make his move to force Anderson to decide on which man to guard. 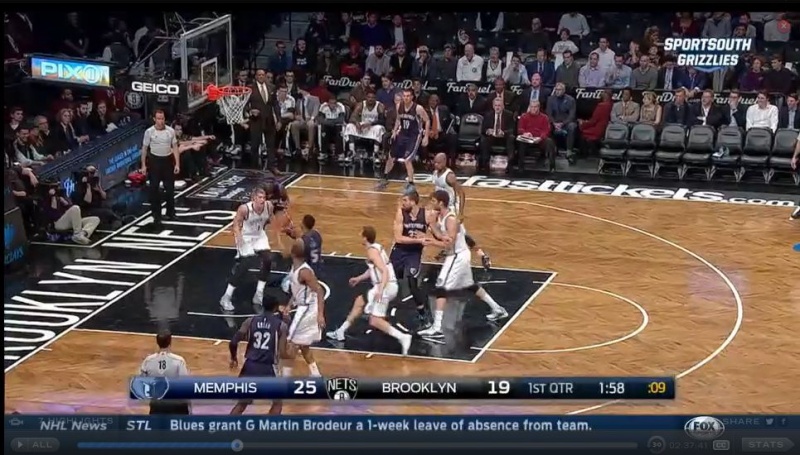 Anderson chose Green who had been camping at the left side the entire time, but his mere presence required a close defender. Lee continues to the basket where he is met by a recovering defender who is to late to stop the easy layup.

Fast Forward to the Next Play

On the next play, Memphis has a fast break opportunity and Jeff Green is dribbling the ball down the right side of the court. A streaking Zach Randolph is sprinting towards the basket with his eyes on Green. 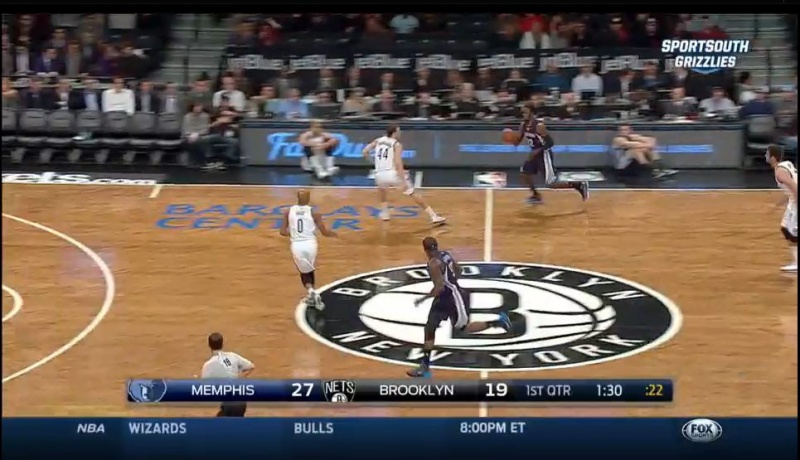 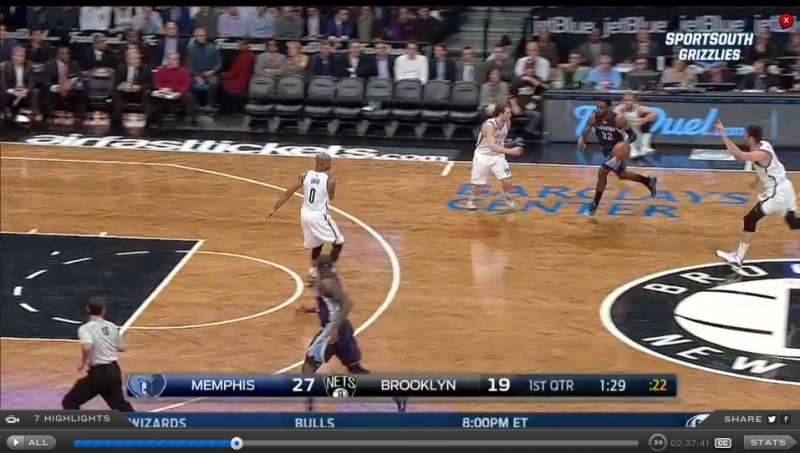 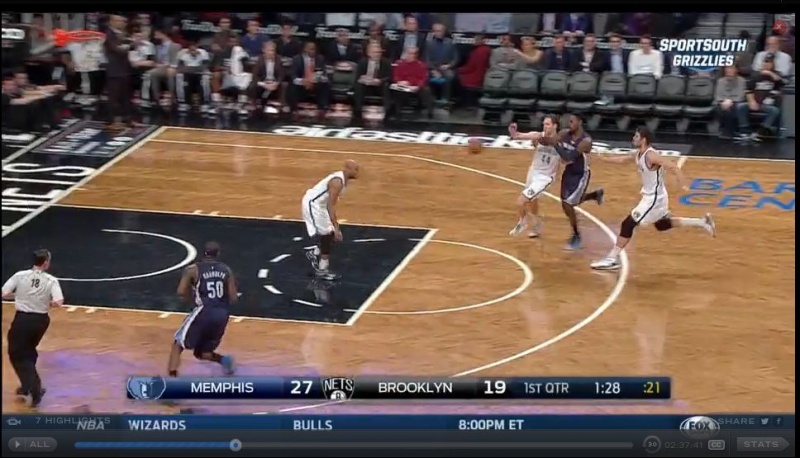 Green gets the ball to Randolph under the basket and Jarrett Jack tries to force him away from taking a shot while help comes. 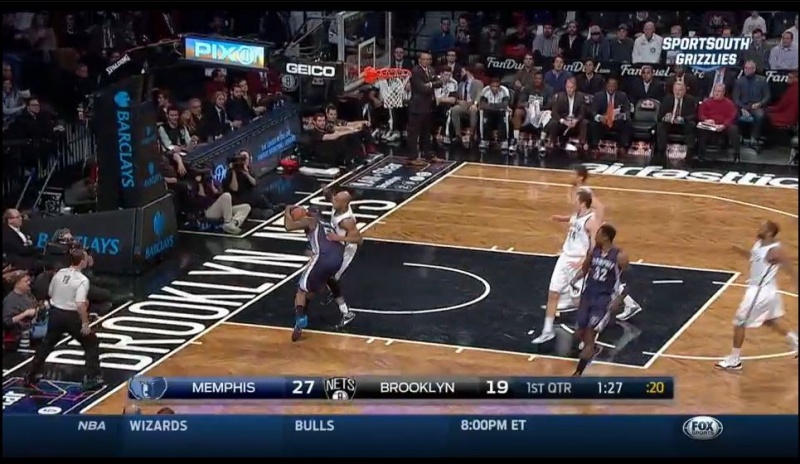 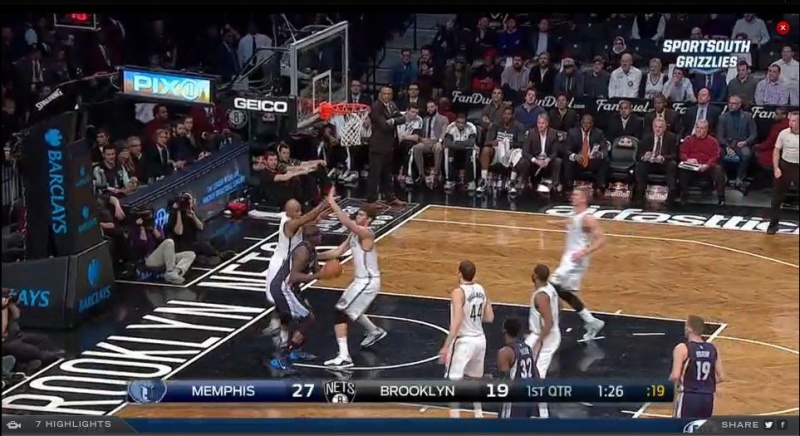 Lopez and Jack are now surrounding Randolph, while Green has two defenders between him and Randolph. All five of the Nets defenders are visible in this screen now while only three Grizzlies players are already there. You know what that means? 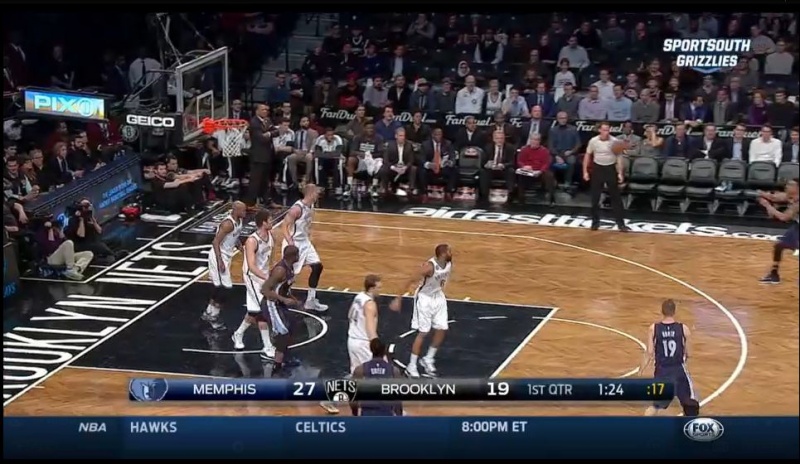 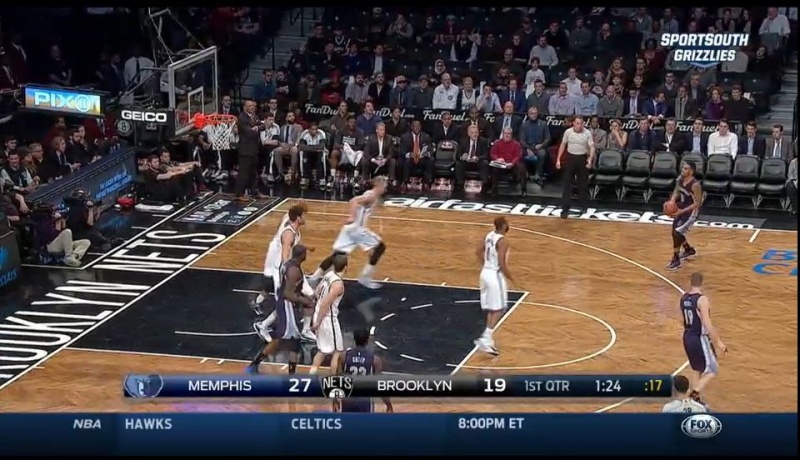 Trailing three by an unguarded Courtney Lee thanks to the defenders focus on the newest member of this Grizzlies team, Jeff Green.