As a beginning NBA DFS player my goal is to get ahead of the learning curve using my strengths and the tools of RotoGrinders. After some serious thought, I recognized that my strength as a DFS player was developing a core of players and multi entering varieties of this core. I will be using the Daily Grind Down, Incentive articles, Vegas Lines, and the advanced stats to develop a core of players for each slate. The DFS Alerts tab and app will be crucial to my success as well, I strongly suggest using it each day. From my research I will choose exposure levels for my core players using the lineup generator tool. I will then select my favorite generated lineups and export directly to the Quarter Arcade at DraftKings.
I made an initial deposit of $50 and will be playing 10% of that bankroll each night, with the plan of taking down the Arcade at some point! Since we are playing the Quarter Arcade I will convert my initial deposit of $50 to 200 tokens, $0.25 each. The goal is to increase my initial token account over the course of this challenge with some major cashes. Below you can find my current token count before day 5.

This goes back to Friday’s turbo slate of four games. After a long weekend of NFL and complete tilt about the NY legislation this is a distant memory. I did enter 22 lineups and cashed for a total of $2.50. That put me at a lost of 12 tokens on the day which brought me right back to where I started with $50, or 200 tokens. The 4 game turbo seems to be a bit difficult to use the lineup generator as it is difficult to create a large enough player pool. I will continue to try out a few turbo tournaments to see if it is a viable option. Prior to day Seven here is my token count:

So six slates in I am back to even, which considering this is my first time playing NBA DFS I am very happy with. I continue to give myself opportunities to succeed which is important. Ideally, if I can make it through the entire NBA season with my initial deposit, I will consider this a success.

I woke up not planning to play DFS, simply out of frustration of the Attorney General. I then went to DraftKings and noticed it was a six game slate. This seems like a sweet spot for me so I took advantage. With six games there seems to be just a large enough player pool to utilize the lineup generator. At the same time I don’t feel overwhelmed with a huge slate of games to attempt to analyze. Following my same process I once again generated my lineups and selected 20. I decided to go with a half fade of Westbrook, so he was in 10 of my lineups. I also loved Dwight Howard matchup and it showed as he was in 10 lineups as well. My favorite game of the night was the Lakers at Suns. It was the 9pm game which was the latest so I knew players would be under owned. I also loved the matchup for Bledsoe and Knight. Knight proved me right as he was my difference maker on the night. At 18.2% ownership he put up 78 DK points. His salary was $7000 which gave him over 10x value. Unfortunately, he was only on 6 of my 20 lineups. I would have liked him for atleast half but it doesn’t always work out. Bledsoe did not have the night I expected and was partially due to Knight taking over and he hurt me with 29.5 DK points at 29% ownership.

My highest scoring team on the night put up 306 points. The lineup consisted of Westbrook, 72 DK, and Knight 78 DK. What hurt me on this lineup was Ed Davis. I saw him as great salary relief for a player who averages over 1 fantasy point per minute. At only 3% ownership if his 4 DK points had been his average of 20 on the year I would have been looking at a top 100 finish. At the same time Dwight Howard had an off night of 25.5 DK points. Overall I was happy with the thought process on my player selection today. Dwight Howard remains severely underpriced and can easily put up 50 DK points a game. I had some exposure to C.J. Miles once I found out that George Hill was out as he scored 26 DK points at a $4100 price tag, giving over 6x value and the necessary salary relief. I liked my player selection for the day and am satisfied with the direction I am currently moving in. Below you can see my scores for the slate compared with my mean and the cash line. 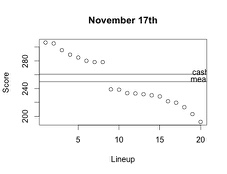 On the day I played 20 tokens and finished with a cash of 33 tokens giving me a net of 13 on the day. Any slate I play where I don’t lose my initial deposit is great, and when I make a small profit I am even happier. 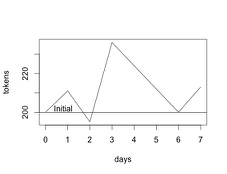 I will continue to trust my process and the experts here at RotoGrinders. I hope to play tonight’s slate of seven games but only if I am able to be by a computer for lineups at 7pm. If not I will be playing the Wednesday slate with 21 lineups as my new token count is now 213. Good luck tonight and I hope you enjoyed the read. Keep Grinding!