I did not plan on drafting best ball fantasy football teams in March. I also did not plan to be bored out of my mind, riding out a global pandemic from my couch, with no live sports to watch or bet. Plans change.

You can debate the costs or benefits of the drafting this early. I personally don’t like drafting without knowing where potential impact rookies like Jonathon Taylor or Cede Lamb will play. I’d prefer to know who is the Patriots’ QB when attempting to gauge Julian Edelman value. If you think you are better at predicting these type scenarios than the field, perhaps you have and edge should fire away.

Last season I started drafting in early June to mixed results. I happily shared screenshots of my seemingly stacked teams with Tyreek Hill picked in the 9th and 10th rounds. Neither of these entries cashed. On the day he shockingly retired I owned 25% Andrew Luck (Insert your favorite burning money GIF). On the positive side of the ledger, I got some nice value on Lamar Jackson, Jameis Winston, Aaron Jones, Mark Andrews, and others before their ADP rose.

I’m not going to commit a significant amount of cash to best balls before the NFL draft. The uncertainty of the rookie landing spots injects more of a randomness/luck element to contests than I am comfortable with. That said, with plenty of time to kill it could be a fun and informative exercise to draft a few teams to get a feel for how that market views certain players.

Below is the first team that I drafted in Best Ball 10s $50,000 Pre Draft Bestbowl. This contest has a $10 entry fee. Let’s take a look to see how I fared. Below is a screenshot of my draft. 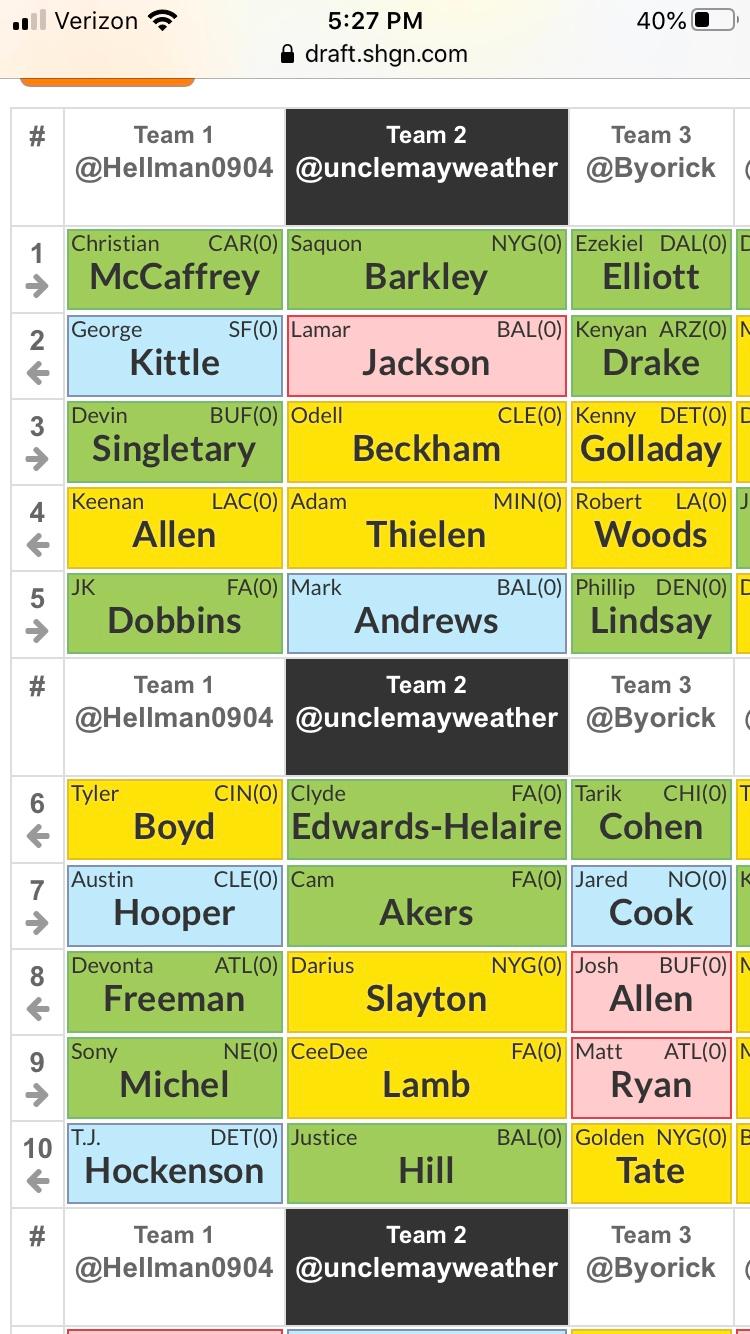 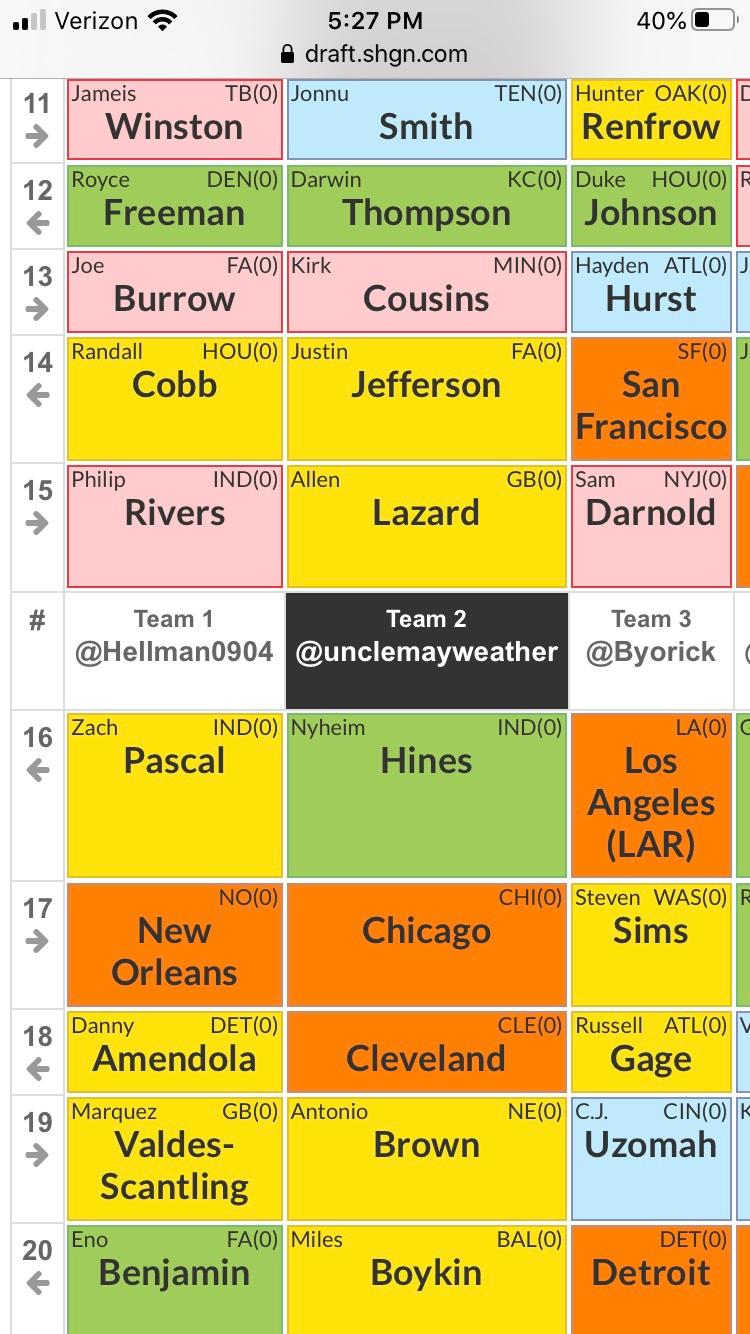 Drafting from the 2nd position I took Saquon Barkley with CMC predictably off the board. One could easily make the argument for Zeke or Dalvin Cook here. Barkley struggled a bit in his sophomore season, as he rushed back from a serious ankle sprain. He did, however, close the season with 30.3, 43.9, and 20.7 fantasy point performances. I am banking on the young Giant carrying this momentum into 2020.

I hate taking a QB in the 2nd round and it was certainly not my plan to do so. I was hoping that Kenyon Drake would fall to me, but he was selected the pick before I took Lamar Jackson. The other RB that I considered was Devin Singletary. The rumors of Melvin Gordon potentially signing a one year deal in Buffalo scared me off. If the news had already dropped that Gordon landed in Denver, I might have pulled the trigger on Singletary.

I feel that getting Odell in the 3rd round was fair value given his upside and talent. I believe we are going to see a bit off a post hype, bounce back year from the Browns. Stephanski should be an upgrade on the over-matched Freddy Kitchens and Jack Conklin will help shore up the leaky offensive line.

I loved getting Adam Thielen in the late 4th. With former running mate Steph Diggs in Buffalo, Thielen should be a target monster. In the 13th round I selected Kirk Cousins, the QB who will be throwing all the passes in Thielen’s direction. In large field best ball tournaments like this one, correlation is essential. With that in mind, I targeted Mark Andrews in the 5th round to pair with Lamar. With Hayden Hurst in Atlanta, Andrews should only see his snap count increase. Jackson’s favorite target clearly has top five TE upside. Getting him in the 5th while Kelce and Kittle went in the 2nd seemed like good value.

On the 6th/7th round turn I took two rookie RBs in Clyde Edwards-Helaire and Cam Akers. This is where you fly blind drafting on March 19. I am basically hoping that one of the two lands in a spot where they are given the opportunity to maximize their talents. Another odd thing about drafting so early is not having the byes set. You pretty much cross your fingers that your QBs, TEs, and Defenses don’t have the same bye week.

In the 10th and 12th rounds I picked up Justice Hill and Darwin Thompson respectively. While neither really made a major impact as a rookie, both flashed enough to indicate that they could be productive if the starter in front of them falters.

In 19th round I took a punt on Antonio Brown. It’s more likely than not that I get zero fantasy points from the enigmatic Brown. However, on the off chance that he gets his head on straight and finds his way on a roster the pick could be a home run.

I used my 20th and final pick on Miles Boykin. If the tall and athletic WR makes a second year leap, the selection will correlate nicely with my highly drafted QB, Lamar Jackson.

Many of us are going to be grinding out the next few weeks (hopefully not months), stuck inside with no live sports. My degeneracy has its limits. I’m not going to bet on Turkish soccer or dudes playing video games. I’ll get my fix by firing into a few best ball drafts. I’m fairly happy with my first team of 2020. Hit me up on Twitter or in the comments and let me what you think and stay safe!