Hello Grinders, I am filling in for Boggslite today in the Daily Plays, but I hope to be an adequate replacement. There aren’t many games going on tonight, but plenty of them have high goal potential. 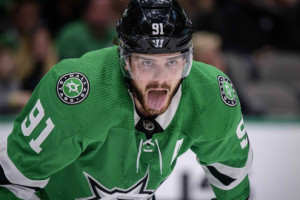 Forwards Disclaimer: There are plenty of great plays tonight that you should plug in at any cost such as Jamie Benn, Tyler Seguin, Ryan Getzlaf and Corey Perry

You’re going to need value around those guys to fit them in, so here are some of the ones I like this evening:

Nick Bonino – Bonino is skating with Corey Perry and Ryan Getzlaf, and anyone who plays with those two is virtually a lock to see an increase in performance and scoring production. Bonino might be the highest scoring potential linemate that the dynamic duo have skated with and I expect Bonino to shine tonight at half the cost of the two studs. Playing against Edmonton only helps his cause.

Claude Giroux – Giroux gets the Sabres at home, and he has been unconscious (In a good way) since the New Year. Buffalo gets badly outshot every night and I don’t know if they have anyone who can even contain Giroux. I expect a big night for Giroux and his linemates, Jakub Voracek and Scott Hartnell.

Marc Letestu – Letestu is not a household name, but with all the expensive players taking up your cap, he provides great relief. He skates on the top powerplay and is under 4k on every site. He is someone with upside against the league’s worst penalty kill and I expect an increase in production tonight, while allowing you to work in all the star players today.

Valeri Nichushkin – NIchushkin skates on the top line and top powerplay. He is priced like he is still on the fourth line and that makes him a phenomenal play today as he is cheap and skates with Jamie Benn and Tyler Seguin against the horrendous Panthers. Look for Nichushkin to see a usual increase in production based on who he plays with as he always puts up big numbers on the top line.

Alex Goligoski – Goligoski skates on the Stars top powerplay, and sees a ton of ice time in general. He has really produced well this year after being a healthy scratch often times early in the year. He has responded well to his time in the pressbox and has been a lethal scoring option from the backend all year. Look for him to continue that against the Panthers.

Kimmo Timonen – Timonen is a fixture on the Flyers’ powerplay and the Sabres take a lot of penalties. Timonen should have a great chance at having a Plus rating, getting some shots through and has 2-3 point upside as well against a team like Buffalo that can give up 5 on any given night.