Not content with running up to the US Open with just another boring event, in Austria this week on the EURO Tour we see a re-branding of the Lyoness Open as the Shot Clock Masters, or as I keep calling it, the Shot Clock Violation Open.

“This tournament will embrace the Tour’s official timing policy (similar to policies used across the world of professional golf) over 72 holes, with an intent to showcase a European Tour event played at a more compelling pace,” the official EURO Tour website tells us. “In accordance with this official policy, each player in the 120-man field will have 50 seconds for the first player in a group to play any given shot, 40 seconds for subsequent players. Players will incur a one-shot penalty for each bad time incurred and these will be shown as a red card against their name on the leaderboard.”

Credit has to go to the EURO Tour folks taking what could have been a ho-hum event and making it into a brisk, interesting experiment, but I do think they should take my advice and rebrand it the “Shot Clock Violation Open”, because it’s the shot clock violations that could make or break cuts.

Last Time Out: After weeks of disappointing EURO contests for me, I finally ended up in the profit zone by going heavy in the Italian Open with Ian Poulter (T8), Graeme McDowell (T5) and Matteo Manassero (T36). Only a frustrating few missed cuts, most notably Sebastien Gros, kept me from a week where I really cleaned house.

The Course: From the EURO Tour Website: “Located 35km from Vienna, Diamond Country Club was designed by Englishman Jeremy Pern and sits in the beautiful Austrian countryside. European Tour veteran and fan favourite Miguel Ángel Jiménez, who enters the week in fine form after claiming his first senior Major title at the Regions Tradition in the United States last month, has since remodelled some of the holes, including the par four eighth. Water is a notable feature on the course, with a lake hugging the right side of the scenic par three 18th, making for a memorable finish. The course, also a European Tour Destination, has yielded a winning score of 15 under par or better eight times since the tournament returned to the European Tour 12 years ago.”

Played last year as the Lyoness Open, what’s notable here is the long Par 5’s and the abundance of water hazards. A difficult course, shot clock nonwithstanding, these players will need to be able to score on these Par 5’s in order to have a chance to win, in my estimation, and that will probably mean birdies. Eagles were a rarity last year, and might be even more rare this time with the shot clock.

Stat I’m looking At: I’m trying to not take too much stock in the shot clock violation aspect, but I am leaning heavily on two things this week: a good recent course history here and on other mountain courses, and pure GIR and driving accuracy numbers. You need confident ball striking to do well here, shot clock or not. 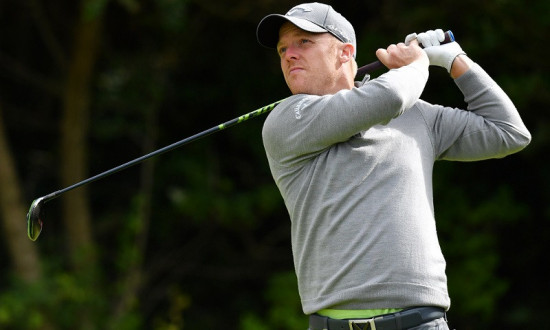 Big Priced Golfer In My Player Pool: Like last week, all of my considerations seem to coalesce around one guy this week: David Horsey ($9,300 DK).

Horsey does not enter this tournament with great form, but what he does have here that few of the others have is a tremendous course history that has seen him go Top 10 here three out of the seven times he’s played here and four consecutive made cuts. I think that confidence should serve him well here in this weak field and allow him to straighten out his swing to find the form that had him finish a very close second here last year. A guy who came alive in June last year, I think he might do it here again this year.

Mid-Range Golfer In My Player Pool: Every week that Austin Connelly ($8,000 DK) is in the field, I ask myself, “Is this the week I pick him?” Finally I have a week where my answer is finally “yes”. The Canadian isn’t powerful off the tee, but I like his accuracy there, which I think might serve him well again in this weaker field.

Value Golfer In My Player Pool: I don’t know if I like taking Florian Fritsch ($7,200 DK) this week because he has done well here in the past (he finished T28th here last year), or whether it’s due to his unique situation as a EURO Tour golfer. Florian never gets on a flight, taking trains to all of his EURO Tour events and thus by necessity has to skip many of them in the Far East or Middle East. Historically speaking he starts to do his work when the EURO Tour comes back to Old Europe, and I think in an event where he needs to do work to keep his card, he does so this week.

Full Fade: Aside from the withdraw risks, I openly wonder where Lee Slattery’s ($10,600 DK) head will be at after pressure-packed Sunday at the Italian Open and US Open Qualifying Monday, where Lee missed out on the final spot in a 9-way playoff. Slattery struck the ball extremely well the last five days, but you’ve got to think he will have run out of gas for this event, and a shot clock behind him won’t help either.