For a long time, I thought consuming as much information as possible was necessary to be successful in DFS. I think many people have started out this way. It makes sense, objectively speaking, why we might start out thinking this way. As cavemen, our brains were wired to value quantity in order to survive. Quantity of food, quantity of mates to reproduce, quantity of supplies.

It’s easy for our brains to understand that more usually equals better. More food = more likely to not die of starvation. More mates = more children. You get the picture.

However, clearly, things are a bit different nowadays. In modern society, it has become mostly obvious that more does not equal better. If you love playing video games and you buy 50 Xbox One’s, that’s great but you can only ever play one of them at a time. The other 49 are useless you dummy. There are a million examples of this. I’m getting off track.

I had always thought the top DFS players were at their computers for 8 hours a day digging into every little statistic imaginable. I used to consume hours upon hours of podcasts for both NFL and PGA in preparation for each week. I didn’t think I was ready to make lineups until I had all the information possible.

Of course as I learned, this is just simply not the case. Actually, it is far from it.

The top players do not need to do “X amount of hours of research” before they can play a slate. While obviously they don’t go into a slate blind, they know that if they took 30 minutes to decide between player X and player Y by digging into historical matchups, recent form, and other little details, that it would just end up being a waste of time.

Why is it a waste of time?

Because research has diminishing returns.

Using that example above of player X vs. player Y, you might be thinking, “but what if that research helped me pick the right one after the slate was over!”. That’s usually where the flaw in your thinking begins.

If player X and player Y both had the same projection (and you trust your projection system) then you just took 30 minutes to decide between heads and tails. It was essentially a coin flip the whole time, yet your brain thought it could come up with the magic answer through extra research.

And suppose your answer ended up being “correct”! The freaking sample size is so small that it was just variance on a given day that made player X outperform Y and you mistook it for your own genius and extra research.

Which brings me to another point.

I think there is a common misconception that the top players somehow know what is going to happen on a daily basis and that’s how they are able to win. People think they have some crystal ball or super advanced projection system that tells them which players will do well today. Hey buddy, news flash, nobody can predict the future.

What the top players actually do is have immense trust in their projection systems and don’t waste their time researching things they can’t control.

Why does research have diminishing returns?

I suppose this article wouldn’t be complete without actually looking at why research has diminishing returns. So quickly let me bore you to death with a graph that explains the Law of Diminishing Returns and how it relates to DFS. 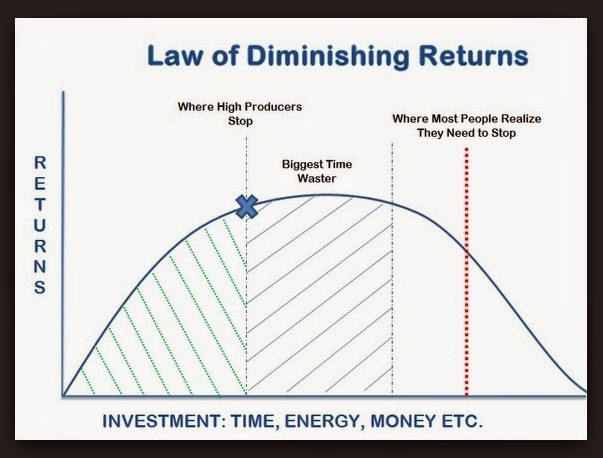 I know it’s gross to look at but let me explain quickly. The law of diminishing marginal returns says that after some optimal level of capacity is reached, adding an additional factor of production will actually result in smaller increases in output. In layman’s terms this just means stop buying more Xbox One’s since you already own the optimal amount of them, which is one.

To bring it altogether, in DFS terms, once you have done enough research to know which teams are on the slate, which matchups are good, and you’re able build +EV lineups, then stop being an idiot and let variance take its course. Once you know what you are going to do and how to do what you want to achieve, don’t dive into stats like BvP on a Saturday in rainy conditions after a loss facing a team with a winning record whose team name ends in “s”. (For so many reasons, don’t do that)

Just trust me. Let go of the need to know everything. If you consume enough information it will all eventually cancel out to zero. At the end of the day, the goal of life is to live a life worth living so why waste your precious time looking at stuff that not only won’t help you, but will end up hurting you in the long run.