Revisiting the Argument Against Drew Gagnon

Two days ago, I wrote the argument against Drew Gagnon and the only thing I got right was the pronunciation of his last name. (It’s “GAHN-yo.”)

I said not to play Gagnon because he sucks. He showed my ass by dazzling the current baseball world, striking out eight with no walks in seven shutout innings.

The results were fantastic, especially if you played him. I admit, I played Gagnon in one of five lineups, but I also stacked his opponent, KT Wiz, in three lineups. Just adding that to show that I have a vested interest in my takes. But back to the results: we shouldn’t orient our future decisions on base-level results of the past when the underlying data conflicts it.

Re-examining my effort to poop on Gagnon, in full preparation to eat crow for you all, we can discover that I wasn’t completely not-wrong. The guy got seven innings out of 103 pitches, but still can’t throw strikes.

I am wrong to definitively say that Gagnon sucks. In his last two starts, he’s struck out 17 in 13 shutout innings. Something is working and he’s doing work.

Gagnon went to Korea a strictly simple fast-change guy with low-frequency sliders and curves. His fastball averaged out in the 92-93 range of mph, which is tragically average for a pitcher in The States without a repertoire. But in Korea, where fastballs by Koreans average out in the high-80s, hitting 93 on the gun is a big deal.

In Triple-A and MLB, Gagnon’s changeup was the pitch that generated the whiffs. A pitch—at around 82-83 mph—that provides a nice contrast to the power fastball in Korea.

This is enough to create a formula for Ks.

The sinker performs pretty well in Korea. It is relatively new to Koreans whereas the foreign pitchers have more history tailoring it to their craft. Gagnon never threw a sinker in his 636 MLB innings, but is now throwing it in Korea.

So, the Korean kryptonite may just be a reason he is succeeding, right? Nope. 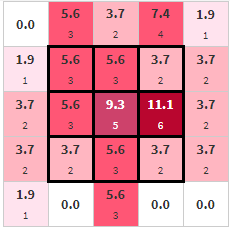 A lot of hangers that should’ve been rocked, but they’re not for some reason. And he lowered his sinker frequency from 28.7% in his first outing to under 5% in his most recent outing.

I think it is safe to say that his sinker is irrelevant. And if he revives it, it’s a ticking time bomb.

This all begs the question: how did it only take 103 pitches to go seven innings?

What I don’t have are whiff and chase rates, but they were probably high. But we do have swing rates and the Wiz swung at nearly 60% of those changeups, proving that KT was chasing unhittable pitches with regularity in that game.

I agree that making them chase is a skill, but how much can we bank on astronomical chase rates in the future? Especially in a low-K league.

I don’t have a true stance on Gagnon. I’m waiting it out until the next slate to see where I’m at. If the price is right again, I will have more exposure than Tuesday, but I predict he will be too expensive and I may fade him.