Russell Westbrook - Going back to the Well

Like many grinders, I too was burned by Russell Westbrook last Monday night. The late news on Kevin Durant shocked my system and took me away from my favorite expensive play, Anthony Davis, and had me pivot to my new favorite, Russell Westbrook. Westy was in a prime position, he was going against a Timberwolves team that is ranked 28th in defense versus point guards. In their last 14 days this team had allowed several point guards to go off for more than 30 fantasy points. In fact, just as recently as the January 7th, THREE guards from the same team (Isaiah Thomas, Goran Dragic and Eric Bledsoe) had 30+ fantasy point games against them. So what could possibly go wrong with Westbrook in a prime matchup WITHOUT the suddenly unavailable Kevin Durant?

Except, it wasn’t to be. Westy had a poor game by his standards as he went 7 for 22 from the field, with 5 assists and 4 turnovers. Overall a poor game for the man who sunk a thousand lineups Monday night. Tonight we face a very similar dilemma, Westbrook is again without the service of his superstar teammate, and will again be facing a below average squad that struggles to defend the point guard, situation looks very similar to the spot he failed in on Monday. Most people will shy away. Not me, he’s going to be in some of my lineups for tonight’s big tournaments and for good reason. I do not believe that Westbrook will repeat Monday’s performance again. 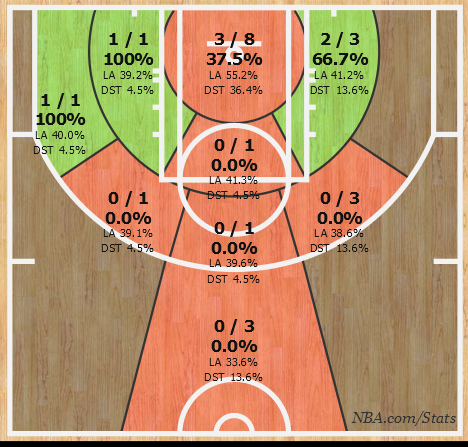 Looking at westbrook’s shot chart you can see that he has a lot of red down the middle, with 8 of his shots coming from under the basket and he missed 5 of those. The league average for those shots is 55%, and if you ascribe to the theory that Westbrook is an above average finisher at the basket, then he should be finishing closer to 60% of those attempts rather than the 37.5% he had on Monday. In fact, on the season, Westbrook averages 35.1% of his shots between 0 and 3 feet, while shooting 57.7% from that range. That completion rate is the lowest of his career since his third season in the league, that can be attributed to several factors that include, but are not limited to, age, fear of injury and defenses crowding the paint to stop Westbrook’s attempts.

The Timberwolves present an interesting challenge for an athlete like Westbrook as they are a team chalk full of young athletic guards and forwards, as well as having some big men that can crowd the paint and make finishing a shot at the rim a more difficult task for anybody. One play in particular comes to mind, and I’ll do my best to break it down below.

The above play acts as a microcosm of the way Westbrook plays when Durant is out, he attacks, he uses dribble hesitations and he explodes to the basket at every given opportunity. He starts this play by immediately turning his body towards the fast break when the shot goes up and starting to plan his attack

Once Perry Jones III gets the rebound he looks up to see the fast break opportunity and he does the right thing and starts the break, with Westbrook streaking up the left side.

Westbrook gets the ball around half court down the left side and he has immediate tunnel vision of getting to the basket. What he doesn’t realize is that he has Serge Ibaka running down the middle of the court with him giving him an option there to pass to.

The defenders all know that Westbrook is unlikely to pass in that situation, so as you can see they all have their eyes on him, and nearly nobody is paying attention to Ibaka coming down the middle.

When Westbrook gets to the painted area, two defenders collapse on him, while Ibaka is free down the middle with an opportunity to receive an easy pass for a dunk. Instead, Westbrook goes high off the glass and badly misses the layup leading to a missed opportunity.

Ibaka doesn’t get the rebound and the Thunder miss out on an opportunity.

Other Numbers to Consider

Westbrook had a lot of periphery numbers that should have translated to fantasy dominance. He had a 39.4% usage rate, he touched the ball 82 times while passing the ball a whopping 48 times. He also had a hand in 65 total possessions that the team had while he was on the floor. These are all positive numbers that show that when Westbrook is on the floor without Durant, he has ample opportunity to produce.

What to expect moving forward

The Thunder are a smart franchise that has managed to build itself through the draft, the players have overcome some challenges including watching Harden get traded away for virtually nothing, yet the team is still one of the most talented in a stacked Western Conference. Westbrook is the head that defines the intensity in which The Thunder play, his enthusiasm and energy are contagious to the rest of his teammates, I even think I saw Perkins run last game.

Tonight against the New York Knicks, I expect more plays similar to the one broken down above, and I suspect that Westbrook will get another 20+ shot attempts, except that this time, he’ll make more than half of them at or near the basket. The Knicks have nobody in the middle to truly challenge the shots that Westbrook takes, and hopefully, the team broke down some game film and Westbrook saw the play above (which was a problem that occurred many times throughout) and may look more to pass this game.