Hope everyone is having a great weekend. I had some great feedback from writing the weekend content a couple weeks ago, so I wanted to start a new Sunday blog. I’m going to target 6 pitchers, 3 to use as a pitcher today, and 3 pitchers to target with hitters. The first thing I do daily is look at starting pitchers, and I hope to get your Sunday morning research started on the right foot. I’m not going to be writing up the COL/MIN game, but all the hitters are in play in this game.

Julio Teheran – Teheran is the pitcher I’m going to be targeting for cash games today. He’s pitched better at home this season, but I don’t think his road numbers worry me enough to fade him today. Teheran has under a .280 wOBA to both righties and lefties this season, and the Cubs only have a .291 team wOBA against right handed pitching this season. Anthony Rizzo is someone to worry about in this lineup, but is 2 for 9 in his career against Teheran. Teheran has only given up 37 ERs in 129 innings, and I think he’s the safest pitcher on the board today. 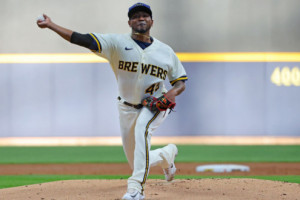 Hyun-Jin Ryu – Ryu was rocked in his last outing against Detroit, but I think he’s in line for a great bounce back game tonight. He’s struggled at home this season, but the Padres offense has really struggled against left handed pitching. The Padres have a team wOBA of .266 and a 22.6 K% against left handed pitching this season. If you take away Ryu’s last start, he’s thrown at least 6 innings in 9 straight games, and only allowed more than 4 ERs once. Ryu opened at a -155 favorite, and I think it might get higher as the day goes along.

Jacob deGrom – Jake is one of my favorite GPP plays on the day. He faced this Marlins team about 2 weeks ago, and was able to pick up his first Major League win. deGrom is coming off his second 11 strikeout game on the season, and presents a lot of upside with his strikeout ability. The Marlins have a 24% K-Rate against right handed pitching this season, which is the highest in the league. deGrom has been fantastic at home, and on the season has a 1.95 ERA at Citi Field. The Mets should be able to give deGrom plenty of run support against Hand today, and he could be a top 3 pitcher on the day.

Justin Verlander vs. Kansas City Royals – It’s a sad time when an ace like Verlander becomes just another name in baseball. Verlander has declined faster than a lot of people have expected, and as a fan I hope he turns it around in the second half. The Royals have a huge sample size against Verlander. They’re batting .280/.339/.414 in 382 at bats against him. Kansas City only has a 15.5 K% against righties this season, and a team wOBA of .308. Verlander has a 5.01 ERA on the road this season, and a .390 wOBA against righties. I really like Billy Butler today, and he could be very under owned in GPPs. 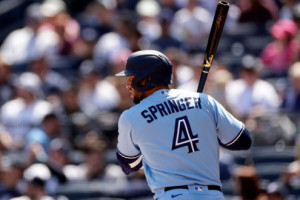 Clay Buchholz vs. Houston Astros – Oh Clay why did you become so bad this season. Buchholz looked good in his first 2 starts coming off the DL, but went back to trying to throw the ball by people last game and gave up 4 ER. Buchholz has a 2.10 HR/9 to right handed hitters this season, and a 1.11 HR/9 to lefties. The Houston Astros are a completely different team that last season. The Astros have scored at least 3 runs over the last 10 games, and they’re averaging 6.3 runs in that 10 game stretch. The Astros might be really under owned because of the COL/MIN game, but could be the highest scoring team on the board today.