I hope everyone is having a great weekend. Thanks so much for all the good feedback last Sunday, I really appreciate it. So for those of you who don’t know, I’m going to target 6 pitchers, 3 to use as a pitcher today, and 3 pitchers to target with hitters. All 3 pitchers to target last week picked up the win, and now I have set the bar high for the rest of the season.

Clayton Kershaw – I know he’s a chalk play today, but he’s by far the safest pitcher on the board for cash games. He’s won 8 straight starts, and 9 of his last 10. He faced this Cardinals team on 6/29, and absolutely dominated them. I think he’s in a great spot to do that again tonight, and should have plenty of run support. Kershaw gives you the safest floor, but also has a ton of upside with the highest K/9 on the board. He’s only given up more than 1 ER twice over the last 10 games. On single pitcher sites, I would do whatever I can to fit him into your lineups. 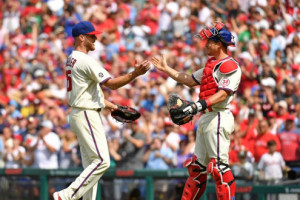 Zack Wheeler – The Padres have become one of the best teams to target with pitchers this season. They have the worst wOBA against righties in the league, the worst wRC+, and the 4th worst K%. Wheeler has actually pitched slightly better on the road this season, and gets a nice ballpark boost today. Wheeler has won 3 of his last 5 starts, and has only given up more than 1 ER in one of those 5 starts. I think some people will fade him today because of his last start against SD, but I think he’s one of the best middle range pitchers on the board.

Chris Archer – My GPP play of the week, last week I nailed it with deGrom and I hope to do it again with Archer. Archer is a big time ground ball pitcher, and has only given up 5 HRs in 113 innings this season. A lot of coaches with roll a left-handed lineup out against him, and Archer has actually been dominate against lefties this season. If the Twins roll a left-handed lineup out Sunday, Archer gets a huge boost. The Twins rank in the bottom half of the league against right handed pitching, and only have a .244 AVG with a 21.9 K%. Archer has a great price on most sites today, and think he is a great SP2 for GPPs.

Nick Tepesch vs. Toronto Blue Jays – Tepesch is going to be my number 1 target for hitters today. His 37.4 FB% has turned in a nice 11.9 FB/HR% this season. Tepesch is giving up a .360 wOBA to righties this season, and a .320 wOBA to lefties. He’s struggled on the road this season, and has to face one of the leagues best teams when playing at home. Toronto leads the Majors in HR% against right-handed pitchers, and has a very high .169 ISO. Joey Bats is my number one option on the board today. 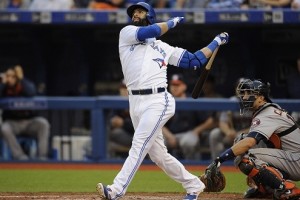 Josh Tomlin vs. Detroit Tigers – I had the Tigers in my write up last weekend and they failed us, but with DFS you have to forget about what happened in the past. Detroit has a very heavy right-handed lineup this season, and aside from Victor Martinez all of the power is from the right side. Tomlin is giving up a .351 wOBA with a 1.36 HR/9 to right handed hitters this season. Vmart and Avila are still in play, Tomlin is giving up a 1.64 HR/9 to lefties, but has a wOBA under .300. Tomlin has really decreased as the season has gone along, and has given up 27 ERs in his last 60 innings.

Brad Hand vs. San Francisco Giants – Hand has only pitched 39 innings this season, but they have been a bad 39 innings. He’s given up 23 Runs in 39 innings. He has the highest WHIP on the board, which always stands out to me when picking hitters against pitchers. The Giants will be able to roll out a heavy right-handed lineup against him. He has a .385 wOBA against righties with a 1.05 HR/9. Posey, Morse, Pence, and even Panda are all high up on my list of hitters today. The Giants came back from the ASB scoring 9 runs on Friday night, and will look to keep it going against a bad lefty on Sunday.