Taking on the Monster - Week 1

You always hear players talk about on the forums “if I had only entered this lineup in the Monster” I would be so much richer…. well, in this blog I’ve decided to do just that and enter 1-2 lineups in the FD $300 Monster every night (or every night that I can do research) and walk through my lineup building process. A little about me, this is my 2nd year playing NBA, had some OK results last year towards the end of the year. I use mostly RG tools and the forums here to research my lineups. I consider NFL to be my best sport and I am bankrolled for this, each buy-in to the Monster is about 5% of my NBA bankroll and I am usually just playing 1 lineup per night – so I don’t recommend laying $300 on this tournament if you don’t want to redeposit.

Usually the max number of entries in the tournament is 577 so you don’t see large amounts of multi-entry (though on one night Ganandorf entered 50 lineups and last night i think balicore had 40) and the cashing line for this tournament is relatively low if you are used to playing the $2 Shot or $1 Swat. I am getting more comfortable finding out where I should differentiate in my lineups because in a tournament this size a lot of the good plays for the day are 30%+ owned, so having that one low owned guy is really all you need most nights.

Anyway, I will go over my main lineups for the first week of this (I played 2 lineups on 2 different nights because I was unsure of which stud I wanted to build around)… I’ll also link to my B lineups so you can see the thought process in those but there are basically the same except for 1-2 spots. 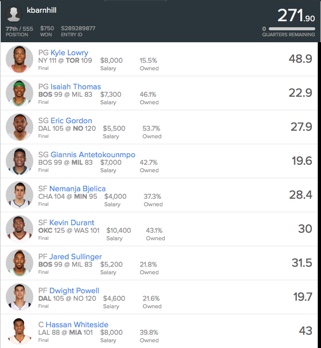 Lots of highly owned players went down with injuries (Durant, AD, Greek Freak and others) so this was a really strange first dip in the pond. I didn’t have AD in this lineup but I did have KD and Freak. I was really, really high on the Wizards against the Thunder until the news came down that Beal was out and then instead of looking for value I went away from the Wizards entirely with Lowry/IT2/Bjelica. I also can’t resist having at least one player on the opposing team for whoever the Lakers are playing. A lot of people stayed on Wall and lots of people had AD both of whom dudded out. I think the key take away here was to not be afraid to completely get off guys if the whole complexion of a game changes. Without Beal, the Wizards were really going to struggle to score points and the game got out of hand early.

I ended up min-cashing right at the cash line.. I think it was 270 pts. 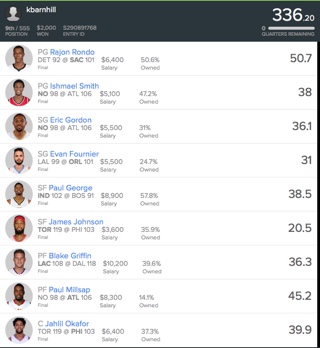 Bingo – this was a good night, but again on one where you have to listen to the injury news and adjust accordingly. AD was ruled out early so I immediately started with Ish and Gordon. Then news came down that both Collison and Curry would be out for the Kings so I went to Rondo thinking he would get more minutes (he got 48!!!!!). Again, going with the theme of picking guys going against the Lakers I went with Fournier, for whatever reason Skiles loves him. He gets so many minutes and though he is not that great of an NBA player minutes = $$$. Noel was ruled out for the Sixers so I went with Okafor – though he is a great play even with Noel since Noel never really dominates the ball. The rest of my lineup was really chalky. You’ll always see Blake and Millsap in my lineups… they are almost always a lock for 40pts and I’ll take that any time. The last bit of injury news allowed me to jump to James Johnson and then upgrade at SF to PG13. I think I finally locked this one in at 6:58pm.

It all came together tonight and I got a top 10 score. Not bad for my 2nd day. But the process was solid. I was plugged in throughout the day and ready to shift my lineup around when opportunity arose. This doesn’t ALWAYS work though – as you’ll see a little bit later. 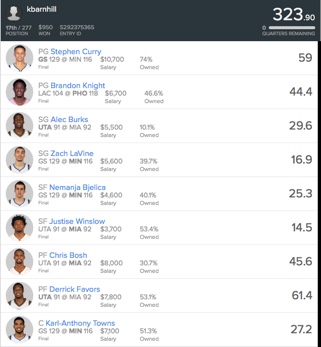 The last 2 days I had found myself being pretty chalky with my lineups, so I spent a good but of time trying to find that one spot to be different at. I have League Pass. I literally watch every game in real time so I can look at player rotations and coaching trends. One thing I had been noticing about the Utah Jazz was that, though Alec Burks was never starting (Rodney Hood always gets the nod) after about 6 minutes in to the first quarter he comes in and then stays in the rest of the first half. All their end of half possessions are Burks in an iso taking his man to the basket. Instant offense. Well, Gobert was ruled out early in the day so I knew I wanted Favors, but I wanted to get Burks in since I knew he would be low owned. Wade was out and Tyler Johnson was starting and there was expected to be lots of Justise Winslow so I thought Burks would be able to score at will.

The one place I kicked myself for was I was 100% off Tyler Johnson. He’s never looked that good to me (though in this particular game he was on fire) and I thought he would be highly owned. I originally had Tyler Johnson and Bledsoe in this lineup but when news came that Lavine was starting I happily switched off of Johnson/Bledsoe to Lavine/Knight. The Knight/Bledsoe was about an even swap since Knight had 44 and Bledsoe had 47. Johnson had 30+ to Lavine’s 19. I would have come in 2nd. Oh well. The rest of the lineup is super chalky so I don’t think I need to explain it. 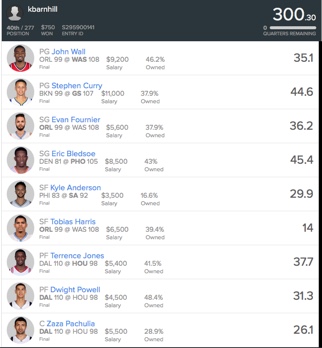 So I was all over the Wizards/Magic tonight. My Evan Fournier man-crush continued and I also loved, loved, loved Tobias Harris in this matchup. Washington is the worst team in the NBA at guarding the SF position. He was literally the first player I plugged in. Oh well. I also had a big piece of the front court in the Mavs/Rockets game.

Terrence Jones might be one of my most favorite NBA players. He plays super hard and really can stuff the stat sheet when he gets going. James Harden has been terrible and Jones is finally healthy. I felt like Jones would have his way with Dirk/Powell/Zaza and I was right. I also think Dwight Powell is a stud. He reminds me of Mirotic from last year (expect he can’t shoot 3s). Tons of minutes, low price and gets over 1 pt per minute. With the Rockets shooting struggles I thought he and Zaza were in line for big rebounding numbers and some blocked shots.

Eric Bledsoe is the Paul Millsap of SGs. He is always stuck in that weird $8k range where he’s not quite a guy with the 50+ point upside that you want, but he is on fire and literally good for 40 every time out. I was able to fit him in with news of Kyle Anderson starting for the Spurs.

My only real miss on this roster was Harris and I was literally yelling at the TV because of how bad he looked in this game. I thought with him dudding out there was no way I cash. But this is a different tournament. I’ve found that if your miss is really highly owned, it’s almost like a 50/50. In this case he was 40% owned and Kyle Anderson was so low owned that the salaries worked out to a little over 4x between them. So one miss won’t kill you. 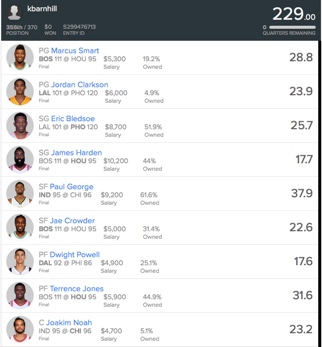 However, a WHOLE TEAM of misses will kill you. Yikes. I’m surprised that there were 14 teams that did worse then me in this one. All the talk of the day was to fade or not fade on RWB. I decided that by fading him and and then getting cute with my punts was somehow a genius move. I did love my Harden/Bledsoe/PG13 core. They all had great matchups. Harden was the real dumpster fire on the night.

Everything else wasn’t such a bad decision. It just was good enough for 4x which won’t do it, ever. I hadn’t rostered a Lakers player all year that wasn’t Julius Randle – but this is a terrible basketball team with terrible coaching. I will stay away until further notice. My sneaky play of the night was Noah. There had been rumblings that he was going to get in the starting lineup. I got stubborn when news came out that Mirotic was starting and decided to keep him in because I was “right”. Wrong again. 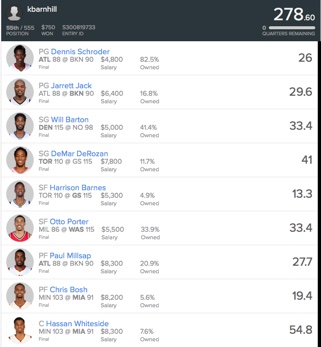 Again, this was one of those nights where I had two expensive guys who threw up absolute duds – so I was sure I wouldn’t even sniff the cashing line. But Godside was less then 10% owned and put up 57 so he saved me.

This was a weird lineup in that I didn’t roster any of the studs. I loved Schroeder and Jack going against each other. I loved Derozan playing in a tough chippy game with the Warriors. I love how Otto Porter is playing right now and is just comically mis-priced for his role on the Wizards with Beal out.

Millsap really let me down and it hurt me. Right to the core. Also, Budzinger’s lineup decisions in this game were baffling to me. At one point in the 4th quarter they traded missed baskets with the Nets for about 4 mins with a lineup of Shelvin Mack, Justin Holiday, Mike Muscala, Mike Scott and Thabo Selfosha. It was one of the most puzzling coaching decisions I’ve seen because they had the Nets on the ropes and then ended up losing the game. Everyone must have been tired?

I also played a 2nd lineup tonight with AD/Curry in it because I was gun shy from how bad my lineup was the night before. That one did not come close to cashing for obvious reasons (AD is made of glass).

RESULTS:
So, overall this was a really fun week. My usual NBA strategy prior to this year had been to build 40-50 lineups and put them all in the Shot/Swat. I like this WAY more and I feel like it is a way better investment of time/energy/money. Cashing is 2.5x of buy in. So you really only need to cash every other night to still be pulling a profit. I mean, you still need to get married to one lineup and live and die with it. So if you are used to making 25-30 lineups a night and 1 of them would have won the Monster… don’t get too worked up. It’s much more stressful then I thought to put $300 on one team even with my bankroll where it is.

Thanks for reading… hit me up in the comments or on PM to let me know if there is too much me and not enough field analysis or if you are curious how certain players ended up on the night.