One of my earliest lessons in MLB DFS was learning the importance of a hitter’s handedness. Understanding lefty/righty platoon splits is one of the most essential skills when selecting hitters in DFS; if you don’t know that Josh Donaldson mashes lefties (and that’s an understatement – with a .325 ISO against southpaws since 2013, he’s the only player in the majors above .300 during that stretch), you’re at a marked disadvantage to those who do. When money is at stake, though, you tend to learn quickly, and a few weeks of serious DFS’ing can make anyone an expert in platoon splits.

But when you start factoring in switch hitting, it can get confusing. Because all switch hitters are not created equal. For every Jed Lowrie (a switch hitter in the truest sense, equally capable from either side of the plate), there are ten players like Neil Walker, who are switch hitters by name, but who are also far below league-average from one side of the plate. Knowing which switch hitters excel from which side of the plate can give you an edge over someone who, for example, decides to roster Pablo Sandoval against a lefty pitcher simply because his “switch hitting” ability appears to give him a platoon advantage. (Sandoval, as you’ll notice below, is an abomination as a right-handed batter). 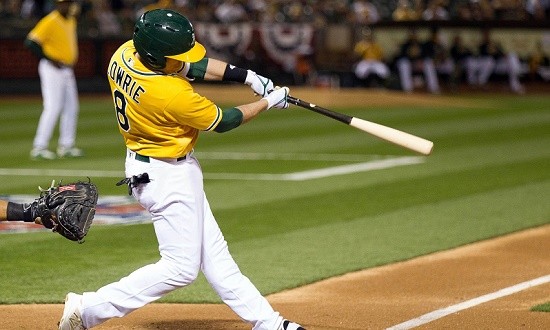 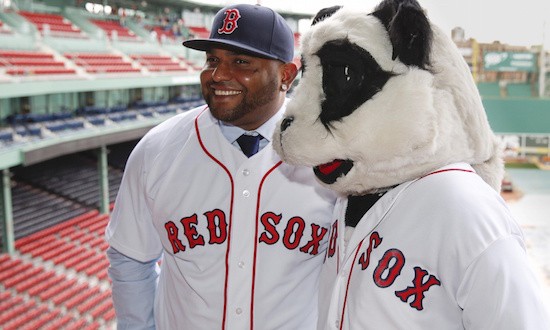 In this blog, I’ve simplified it for you. Using 2013-2015 data from FanGraphs, I’ve identified the 38 active players who hit from both sides of the plate and have at least 200 plate appearances from each side. Below, you’ll find a table with each of these players with their current team, number of plate appearances from each side, wRC+ from each side, the difference between wRC+ numbers, and the side of the plate from which they excel. The table is organized in descending order by “difference”; the players at the top are far better from one side of the plate, while the players towards the bottom are more neutral in their splits. This means that it’s the players at the top of the table who you really want to “get right” when building your lineup.

But first, a few caveats:

***Even going back three years, the sample sizes involved (particularly in regards to hitters facing left-handed pitching) are nowhere near large enough. The authors of The Book claim that a righty hitter needs around 2,000 plate appearances against a lefty pitcher, and a lefty hitter needs around 1,000 plate appearances against a right pitcher, before a player’s true talent begins to emerge. In other words, do not take this table as gospel – there’s likely to be some noise in these three-year numbers. For various reasons (players changing teams, ballparks, and/or spots in the batting order, for example) I felt it was relevant to use a three-year data set. Look at the table as a starting point.

***I chose to use wRC+ because it’s the closest to an all-in-one hitting stat that we have, but this is (admittedly) a little reductive. Many players have nuances that might go unnoticed given the length of this blog. Some hitters might strike out more as righties, even though their wRC+ is better from that side of the plate, for instance.

***BABIP needs to be factored in, as well, especially when dealing in such small sample sizes. “(player-popup)Dexter Fowler”:/players/dexter-fowler-10562’s .387 BABIP in 424 PAs as a righty against lefty pitching suggests that, while he might be better hitting right-handed, he might not be 37 wRC+ points better (as his 103 wRC+ vs. LHP and 140 wRC+ vs. LHP would suggest). For the record, Fowler has a .303 BABIP as a lefty hitter against righty pitching.

But what about the young players?

Because they fell short of the PA cutoff, several younger players were omitted from the above table, but they’re certainly worth mentioning. Small sample warnings apply, of course. 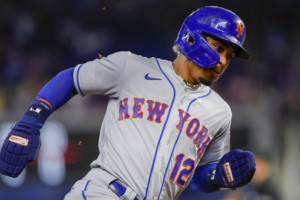 The Indians’ defensive wizard showed some offensive chops from both sides of the plate in his rookie year. In 283 PAs as a lefty hitter facing righty pitching, Lindor owned an impressive 119 wRC+. When facing lefty pitcher as a righty hitter, Lindor was even better, posting a 144 wRC+.

Lindor probably won’t hurt you from either side of the plate, but he appears more valuable as a righty (25 wRC+ points better).

The Mariners’ rookie was significantly better from the left side of the plate last year, posting a 121 wRC+ in 135 PAs against righty hurlers. In 112 PAs as a righty hitter, Marte was still above average, posting a 103 wRC+.

Abraham Almonte, Indians
Almonte’s splits are almost comical, as he’s more than twice the hitter as a lefty, where he posted a solid 112 wRC+ in 172 PAs. His 51 wRC+ in 64 PAs as a righty might be small sample size noise, but it’s definitely an indicator that Almonte is strictly a platoon player.

Target Almonte only as a lefty against righty pitching (61 wRC+ points better). 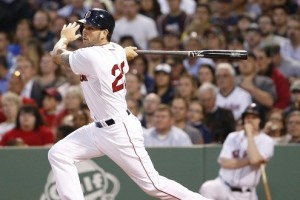 Swihart was pretty unusable as a lefty against righty pitching in his rookie campaign as the Red Sox catcher.
His 65 wRC+ in 91 PAs in that split was 37 wRC+ points below his output when hitting from the right side,
where he posted a much more respectable 102 wRC+ in 218 PAs.

Swihart is only a viable target as a righty against left-handed pitching (37 wRC+ points better).

Andres Blanco, Phillies
Blanco was surprisingly effective last season, and from both sides of the plate. As a lefty against righty pitching, he posted a 118 wRC+ in 166 PAs. From the other side of the plate, he posted a 168 wRC+ in 95 PA.

There’s definitely some small sample chicanery in Blanco’s numbers (especially the 168 wRC+). He appears to be viable as both a lefty and a righty, but perhaps he’s better as a righty (50 wRC+ points better). 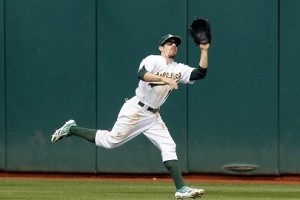 Oakland’s speedy rookie outfielder was mostly in play last year for his stolen base upside, but he wasn’t a major liability from either side of the plate. As a lefty against righty pitching, he posted a 95 wRC+ in 371 PAs. As a righty against lefty pitching, his 116 wRC+ in 171 PAs was a bit better.

Burns can be used from both sides of the plate, but he might be better suited as a righty (21 wRC+ points better).

Hank Conger, Rays
Hank Conger joins the Rays this year, and it’s a fair bet that he won’t see the field against left-handed pitching. When he’s batting right-handed, he’s a train wreck, as he posted a 71 wRC+ in 112 PAs for the Astros last year. He fares better as a lefty, where he had a 144 wRC+ in 116 PAs.

Thanks for reading! My goal is to blog every day in the month of April, although we’ll see – I’ve got a wife, a kid, a job, and the WWE Network. Either way, click the green thumbs up if you liked it, leave a comment if you feel like it, and don’t forget to check back for more of my MLB thoughts!

If you’re new to MLB DFS, or if you’re feeling a bit rusty, check out my MLB DFS Glossary, where I cover MLB stats, DFS lingo, and a few RG-specific inside jokes.